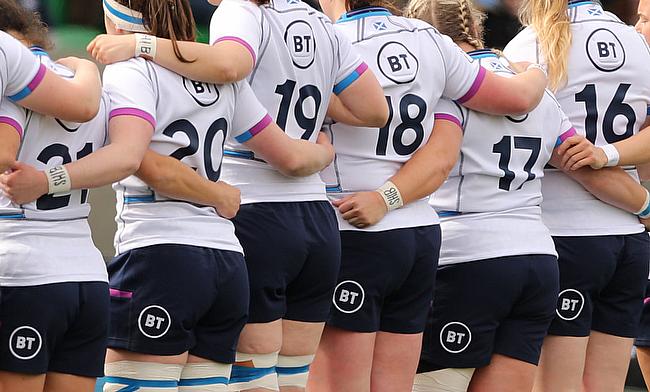 Edinburgh University skipper Sarah Denholm and her squad out to emulate the 'Class of 2017'
Exclusive: Jo Yapp talks uni rugby and growing Worcester Warriors Women
'He made you feel ten feet tall': Tom Smith was a quiet, humble legend and the ultimate team player
TikTok Women's Six Nations Round 2 - Wrap Up

Scotland head coach Bryan Easson has talked regulary during this year’s TikTok Women's Six Nations about wanting to see improving performances from his side as they build up to the World Cup later this year.

In the first three games of the championships, he has got those performances he is after in parts; the second half versus England, the first half versus Wales and the second period against France last time out.

However in high level sport, 50 per cent displays do not get results and three losses have left the Scots on one point and fifth in the table heading into round four.

While most eyes this weekend may be focused on Mattioli Woods Welford Road on Sunday when England host Ireland, for the Scotland squad and Scottish fans, the big one is in the Stadio Sergio Lanfranchi as they travel to Parma to face Italy on Saturday evening.

It will not be easy, though, because Scotland have lost their last five Test matches to these opponents - three in the Six Nations, one in an Autumn Test and one in a World Cup qualifier - since a 14-12 triumph at home in 2017.

“The last time we beat them was in 2017 when it was 14-12, so you can’t argue with what’s happened over the last four years,” Easson told TRU from the team hotel in Parma.

“We have talked this week about winning on the road. The three 40 minute performances we have had so far in the tournament aren’t good enough and we want to show that we can actually now put in a performance to win a game against the Italians.

“We think we’re good enough for that. We’ve been honest with ourselves and reviewed the games we have already played very closely. We had decent 40 minute performances against England, Wales and France. What we need to do is piece the jigsaw together and put in a more composed performance on both sides of the ball.

“We are creating a lot of chances, but we’re maybe going through our systems rather than backing ourselves. It’s just about having that confidence.

“In the first three rounds of games we talked about performing and improving, but I think we’ve seen enough in our performances to say in the next two weeks [against Italy and then against Ireland] it’s all about winning.”

“They deserve their chance to start”

The starting XV for the game in Italy shows six changes in personnel to the one that lost to France at Scotstoun in Glasgow on April 10.

Molly Wright, Emma Wassell, Rachel McLachlan, Caity Mattinson, Sarah Law and Shona Campbell are the ones coming in while Anne Young and Hannah Smith have been added to the bench.

For 30-year-old Watsonians’ player Wright, often a hooker, it will be a 13th cap, but a first start for her country at loosehead prop while Worcester Warriors’ Mattinson, the 25-year-old former England scrum-half, will be earning a fourth cap and a first start too.

They deserve their chance to start,” Easson said. “A Six Nations in a World Cup year is different as it allows me to push the envelope in terms of selection and what I mean by that is that it puts pressure on every player.

“I want selection to get everyone on their toes in terms of how they train, how they act on and off the field and I think what Molly has done is bring real physicality.

“Her ball carrying and defence is good and has put a bit of pressure on Leah [Bartlett, the regular starting loosehead]. We really need to build depth in that position.

“Caity is deserving of a start because she has been coming on when games have been changing and she has had to chase things a bit. It is important now for us to see how she controls a game from the start.”

As Easson looks to build depth for the World Cup in New Zealand in October and November, sadly one player who will not be there is Worcester Warriors’ Lisa Cockburn.

The 29-year-old loosehead prop earned her 24th cap against England off the bench earlier this month, but had to be replaced after suffering a knee injury shortly after coming on.

She was to miss the rest of this tournament but now post-surgery, Easson has revealed that she is out long-term.

“She’s going to miss the World Cup. She injured her knee against England and it wasn’t a good one for her,” her head coach explained.

“She did her ACL and will be on a long-term rehab. She’s a determined lady who wants to get back with the squad as soon as she can.

Head coach Bryan Easson reflects on his squad selection ahead of @Womens6Nations round four.#AsOne pic.twitter.com/V5DGQESk4k

Meanwhile, key player Jade Konkel will miss the remaining two rounds of the Six Nations with a rib injury after the Harlequins No. 8 went off with an issue against France.

She trained at the start of this week and was “trucking along quite nicely”, according to Easson.

However, he said:  “Then she had a bit of pain, we scanned her and decided after the scan that she would not come to Italy. She’ll be out this week and next [versus Ireland]. It certainly doesn’t rule her out of anything much further than that.”

Italy versus Scotland in the TikTok Women’s Six Nations kicks-off at 8.20pm local/7.20pm UK time on Saturday and is live on BBC Scotland