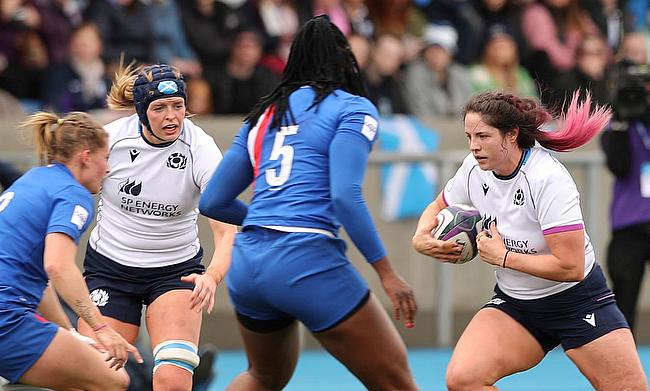 Heading into the closing stages of the European World Cup qualifying event in Parma, Italy, back in September, Scotland’s hopes of making the ‘big dance’ were hanging by a thread.

They were 18-13 down to Ireland with seconds remaining until they showed great patience to work through the phases and score a levelling try through full-back Chloe Rollie.

Replacement Sarah Law then kicked the conversion to give the Scots a 20-18 win and put them through to a final qualifier.

The squad rode the momentum gained from that to then defeat Japan in an Autumn Test before easing past Colombia in the final World Cup qualifier in Dubai in January to seal their plane tickets to New Zealand in October.

The TikTok Women’s Six Nations in March and April has not gone to plan though, four defeats from four leaving them bottom of the table heading into ‘Super Saturday’ and a meeting with Ireland in the Kingspan Stadium in Belfast.

With Covid, other illnesses, injuries and negative results having made the last few weeks tricky, it will take quite the effort to get an away victory, but head coach Bryan Easson wants his charges to channel memories of September from the Stadio Sergio Lanfranchi.

“I think the way we played against Ireland last time out is a role model for how we need to move on, to be honest,” Easson said.

Bryan Easson has named an unchanged side for the final round of @Womens6Nations.

“I think it’s just about having that patience. We talk about momentum swings in a game, but also momentum in phases, and at times when momentum is not quite going your way you just have to have more patience to get some more go forward - and I thought we tried to force the issue a little bit much last week [in the 20-13 loss to Italy in round four].

“There was a recipe for success in September and there’s no reason why we have to move away from that.”

“Clinical is the word, we have not been clinical”

Ever since the Scots coughed up try scoring opportunities against England in round one on March 26, the message from Easson has been the same.

While the squad have played some nice rugby in parts, four defeats from four tells its own story.

And they will not have a better opportunity to record an away victory than this weekend coming given that Easson has had the relative luxury of being able to pick an unchanged starting XV while Ireland are coming off the back of a 69-0 thumping to England and have a number of key players away playing sevens in Canada.

Easson said:  “Clinical is the word, we have not been clinical, but I do believe the belief is there in the squad.

“As a coaching group we have been honest with them, we build the pressure on opponents and then release it far too easily and far too quickly.

“We just have to show patience and not force the issue.

“It has been a tough Six Nations in terms of the results, but we have also been in good positions in games and let them go. It is all about this weekend and putting a performance together.”

Given the dramatic way in which Scotland defeated Ireland a few months ago, this game is likely to be hard fought from the outset.

Scotland front-rower Molly Wright, a hooker who played well at loosehead prop against Italy, is looking forward to the challenge.

The 30-year-old from Sale Sharks said:  “This is a hugely important game from our point of view and we know this is going to be a big game anyway after [what happened] the last time we played Ireland.

Scotland forward Molly Wright reflects on preparations for the final round of @Womens6Nations and the importance of Tennent’s Premiership club @watsonianwrugby in her journey.#AsOne pic.twitter.com/JriywklDIY

“They are going to be coming at us, we know that, so we think it is going to be full of fire and we are looking forward to that.

“We play this game because we love rugby and games that are competitive are always the best.

“It was a bitterly disappointing result for us in Italy last week. It was another opportunity to show how we have developed and we just didn’t put in the performance or finish things off.

“This has been a hard week, but we have got to regroup as we have a big game this weekend and this is our last opportunity to show everyone what we are capable of.

“I don’t think there are gaping holes in our game, it is just those finer bits of detail that we have to sort out. We are creating opportunities, but we are just not executing, so I guess that is what we have been trying to fine tune this week.”