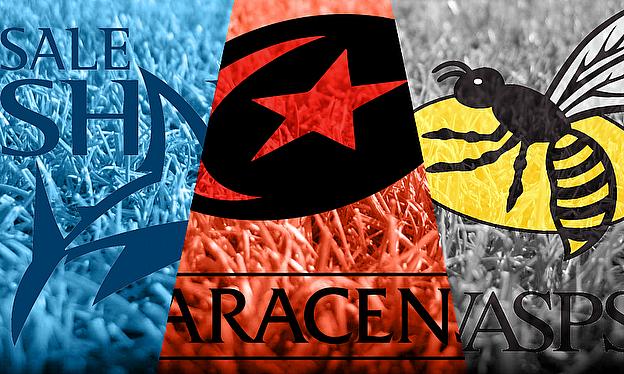 In Part 4 we take a look in the Sale Sharks, Saracens and Wasps' Academies
©TRU

We wrap up our look at Aviva Premiership academies by profiling the last three remaining teams; Sale Sharks, Saracens and Wasps.

Sale and Wasps both underperformed in this year’s Aviva Premiership Academy League, but have plenty of reasons to be positive for the future, whilst Saracens lifted the trophy and continued their recent trend of producing some of the most gifted players English rugby has seen in some time.

Sale Sharks
Sale complete the trio of sides, along with London Irish and Newcastle Falcons, that have struggled to retain their top academy players over the last few years. The likes of James Gaskell, Rob Miller and Henry Thomas have all moved on recently, but with key senior players re-signing at the Salford-based club, England representation for high achievers and the club returning to the European Rugby Champions Cup, current academy players will hopefully realise that they can achieve their goals with Sale.

Hot Prospect – James Mitchell, Scrum-half
Mitchell will be looking to follow in the footsteps of Mike Haley and Josh Beaumont and break into the Sale 1st XV over the next couple of years. He is currently busy with the England U20s side, but with Chris Cusiter approaching his 33rd birthday, Sale will be keen to give Mitchell an opportunity next season to compete with Nathan Fowles and stake a claim to be Cusiter’s long-term successor.

Other Noteworthy Names
Fly-half Sam James and centre Sam Bedlow are two relatively unheralded prospects but have the potential to push on and provide back-up to the likes of Danny Cipriani and Johnny Leota next season. Prop Ciaran Parker is a former England U18s representative who offers a lot in the loose, and with the right coaching, could add some fresh impetuous to an underrated front row over the next couple of years.

Saracens
Current Academy League champions, Saracens have done a fantastic job over the last couple of seasons of shedding the big spenders tag and replacing it with a reputation as one of the finest producers of young talent not only in England, but across the entire rugby-playing world. The likes of Maro Itoje, Ben Spencer, Ben Ransom and Nick Tompkins have all gone on to have success with the first team, but the surface has only begun to be scratched in North London.

Hot Prospect – Nathan Earle, Wing/Full-back
One of the stars of the 2014 Junior World Championship, Earle dazzled the watching world with his potent combination of power, pace and elusive footwork. He is the complete back three player, capable of fielding high balls with ease, launching scything counter-attacks and creating attacking opportunities out of nothing with the aforementioned combination of pace and footwork.
A torn ACL has derailed Earle’s 2014/15 season thus far, but if it were not for that, expect him to have featured heavily for Bedford in the IPA Greene King Championship and for Saracens in the LV= Cup. Providing he can stay injury-free next season, Earle could cement himself as one of the game’s brightest up and coming stars.

Other Noteworthy Names
The future is bright at Allianz Park and though the likes of Itoje and Ransom are stealing the limelight, there are plenty of other reasons to be excited. Biyi Alo is an emerging tighthead prop who has begun to feature in the LV= Cup, whilst he is joined by loose forwards Matt Hankin and Hayden Thompson-Stringer. Given the demands of the modern rugby season, all three should see their opportunities increase in 2015/16, whilst Alo in particular should make a bid for exposure in the Premiership and ERCC, even with the likes of Juan Figallo, Kieran Longbottom and James Johnston all competing for time at tighthead.
The backs are equally well-stocked, including England U18s fly-half/centre Max Malins and England U20s full-back Aaron Morris. Both players should stake claims for LV= Cup representation next season, but with Saracens already boasting very impressive depth, dual-registration will be the likely course for both players to add to their growing rugby resumes.

Wasps
Historically one of the most productive academies in the country, Wasps, like Leicester, have gone through a bit of a dry spell in recent years. The quintet of Christian Wade, Joe Launchbury, Elliot Daly, Sam Jones and Billy Vunipola have all gone on to have success in the Premiership and/or international arena, after they all broke through from Wasps’ academy at more or less the same time, but the club has struggled to replicate that success over the last year or two.

Hot Prospect – Piers O’Conor, Wing/Full-back
O’Conor is a dangerous counter-attacking threat who has helped England U20s to two wins from their opening three games of this year’s U20 Six Nations and fitness-permitting, is all but certain to make their squad for the JWC.
He has also featured for Wasps this season, starting in their LV= Cup win over London Irish, as well as their narrow loss to Sale, impressing with his attacking ambition and understanding in both games. More playing opportunities should come O’Conor’s way next season and playing alongside the likes of Wade and Daly, as well as Alapati Leiua and Frank Halai, should help him take his game to the next level.

Other Noteworthy Names
Gus Jones and Oskar Hirskyj-Douglas, both flankers, have made significant contributions at international age-grade and club levels respectively. The former played an important role in England’s 2014 JWC-winning campaign, whilst Hirskyj-Douglas impressed during a stint with Henley, as well as featuring for Wasps in limited opportunities.
Amongst the backs, James Small-Edwards, son of former Wasps defence coach Shaun Edwards and M People singer Heather Small, is a very highly-touted prospect and made his debut for Wasps in their LV= Cup try-fest with Cardiff Blues earlier this season. Small-Edwards will undoubtedly be on England’s age-grade radar and not because of his famous parents.