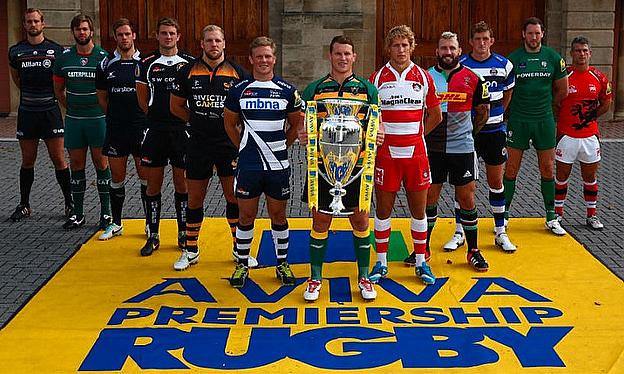 Amidst all the talk of ring-fencing the Aviva Premiership and the unseemly demise of London Welsh, one of the most exciting title races since the competition began is quietly going under the radar.

Current champions Northampton Saints have managed to build a comfortable nine-point lead at the top of table, but with just five points separating second-placed Exeter Chiefs and sixth-placed Wasps, this year’s run in has the potential to be as exciting as any we have seen.

With just five games remaining in the regular season, it’s time to look at which teams sit in pole position to make the playoffs.

Northampton have a challenging run in, facing Wasps, Exeter (a), Saracens, London Welsh and Leicester Tigers (a), but it’s difficult to see them finishing up anywhere but top. The game with Welsh at Franklin’s Gardens is all but a certain bonus point win, whilst they will also expect to hold their serve at home and beat both Wasps and Saracens. Even if you assume they lose their away games with Exeter and bitter East Midlands rivals Leicester, the nine-point advantage they have already accrued should be enough to see them secure top spot.

Following Northampton are Exeter, who have been excellent to date this season, but undoubtedly face the most challenging final five fixtures of any of the top six. They head to Welford Road to take on Leicester on the 28th March, before finishing up the season with Northampton, Wasps (a), Saracens (a) and Sale Sharks. Three away trips to fellow teams in the top six is anything but enviable, but on the flip side, it does allow Exeter maximum opportunities to influence the final make up of the playoffs.

Saracens currently sit third, just a point behind Exeter, but do have an easier run in on paper. The North Londoners welcome Harlequins and Leicester to Allianz Park in the next two rounds, before Northampton (a), Exeter and London Welsh (a) to finish. It’s not the easiest run, but if we once again assume the fixture with Welsh will result in a bonus point win, as well as Saracens being favourites for their three remaining home games, the trip to Franklin’s Gardens is all that could prevent them from finishing the season on a hot streak.

Aside from Northampton, arguably no team is in as good a position as Bath, despite sitting fourth in the table. Their recent run of poor form during the international period has been well documented, but with the imminent return of their international contingent and a run in that any of the other top six teams would sell their souls for, they are primed to make a charge on the title. Bath’s sumptuous run in consists of London Welsh (a), Newcastle Falcons (a), London Irish, Harlequins (a), Gloucester, and without being disrespectful to any of those sides, Bath will likely be targeting a 100% record through those five fixtures. All five of Bath’s opponents are currently in the bottom half of the table.

Now we come to the two sides currently outside of the playoff spots, but well within reach, Leicester and Wasps. It seems a long time ago that these two teams were the premiere sides in English rugby, almost annually competing for the Premiership’s grand prize at Twickenham, but both sides have dealt with adversity well this season and find themselves in the mix to go all the way. Leicester are actually tied for points with fourth-placed Bath, whilst Wasps sit a little adrift from the pack, currently three points behind Leicester and Bath.

The run in does offer hope to Wasps fans however, as the club plays Northampton (a), London Welsh (a), Exeter, Leicester Tigers and London Irish (a). The odds are stacked against them for their trip to Franklin’s Gardens, but the four remaining games are eminently winnable, and their two game home stretch against fellow playoff chasers Exeter and Leicester will have a huge bearing on who ultimately makes it to the semi-finals.

Leicester meanwhile finish up their season with Exeter, Saracens (a), London Welsh, Wasps (a) and Northampton. Aside from the game with Welsh, that’s a tough schedule to deal with, but as was mentioned about Exeter earlier, it gives them maximum opportunity to climb above their rivals and secure ‘eight pointers’.

The commanding lead that Northampton built up earlier in the season should see them keep hold of top spot, whilst Bath may well be favourites to secure the other home semi-final. Mike Ford and his charges could well be looking at 20+ points from their final five games if they play to their potential, and they should be able to take advantage of the other four teams in the top six all taking points off of each other.

The final two playoff spots are a little harder to call. Involvement in the European Rugby Champions Cup could distract both Saracens and Wasps, but on paper, they have the easiest two run ins of the remaining teams. Wasps, especially, could take advantage of home games against fellow top six sides, as well as trips to underperforming sides in the bottom half of the table, whilst Saracens have the depth to ensure this is the time in the season when they can shine. That is not to discount the threats that Leicester and Exeter pose, but both face daunting run ins, with Exeter’s particularly harrowing, and both sides may have to suffice with an automatic ERCC qualification spot.