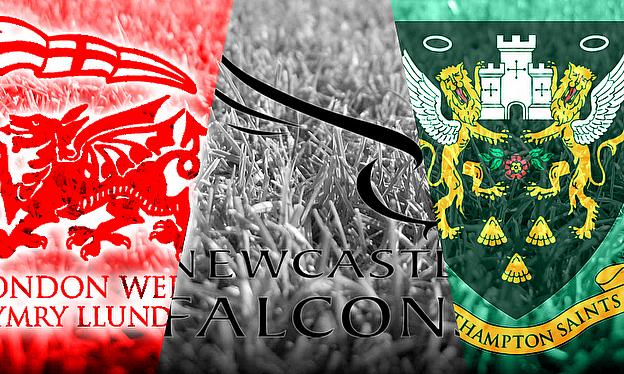 We have now passed the halfway mark in our look at the academies of the Aviva Premiership and pick up with London Welsh, Newcastle Falcons and Northampton Saints.

This selection includes the current Aviva Premiership Academy League runners-up, Northampton, who have an extraordinary array of talent ready to make the step up to senior rugby.

London Welsh
It’s difficult to be too definitive about the prospects Welsh have at their disposal, mainly due to the fact they do not compete in the 14-team, Academy League. They lack an academy team and/or official second team, meaning that what you see in the Welsh first team squad is the entirety of their professional playing staff.

Newcastle Falcons
Similar to London Irish, Newcastle have unfortunately become a bit of feeder team for other Premiership sides in recent years, but that trend could be coming to an end, with Newcastle proving to be a far more competitive team this season.
Jonny Wilkinson, Toby Flood, Mathew Tait, Geoff Parling and David Wilson have all come through Falcons’ academy in the professional era, whilst current Falcons Simon Hammersley and Will Welch are well on their way to being talked about in the same reverence by Newcastle fans.

Hot Prospect – Zach Kibirige, Winger
Kibirige shot to fame during last year’s U20 Six Nations, scoring one of the tries of the season as he wound and powered his way through a beleaguered Welsh side, evading or breaking well over six tackles. Impressive performances in that competition looked to be a stepping stone on the fast-track to Junior World Championship success and representation at senior club level, but a broken leg in his Newcastle debut put all of those plans on hold.
With Newcastle now playing a much more expansive brand of rugby thanks to their new 4G pitch, Kibirige could soon become a big hit in the Premiership. His speed combined with the power of the likes of Sinoti Sinoti and Alesana Tuilagi, not to mention the guile of Hammersley from full-back, would help to create one of the more dynamic back threes in the Premiership.

Other Noteworthy Names
Newcastle’s Brian Tuilagi, alongside his cousin Freddie at Leicester, is spearheading the second generation of Tuilagis to wreak havoc on the Premiership. A powerful back rower, Tuilagi will look to kick on in 2015/16 and join former academy teammate, Chris Harris, in the Newcastle first team squad. Second row William Witty is also highly-thought of in the Falcons’ academy, but may take slightly longer to develop, as he combines his rugby with a full-time degree at Newcastle University.
Tuilagi and Witty are also joined by back rowers Callum Chick and Joe Craggs, both of whom are products of Gosforth Academy, as well as England U18s teammates. Chick is a number eight with good ball skills, who captained that England side to victory over France last month, whilst Craggs is a flanker who brings plenty of energy and work rate to the pitch.

Northampton Saints
Like Leicester in our second look at the Premiership academies, Northampton’s current crop is overflowing with highly-touted prospects and this was illustrated by their journey to the Academy League final this season. Even discounting recent graduates such as Tom Stephenson, Jamie Elliot and Tom Collins, the sheer quantity of potential international-calibre players is astounding.

Hot Prospect – Daniel Hobbs-Awoyemi, Prop
A staple of England’s 2013 and 2014 JWC-winning squads, Hobbs-Awoyemi joined a very select group of Englishmen and New Zealanders last year to have won multiple JWC titles. His scrummaging is his most potent weapon, but he also carries strongly and defends efficiently.
Working his way up a pecking order which already features Alex Corbisiero and both Alex and Ethan Waller will be Hobbs-Awoyemi’s biggest challenge to date, but the Northampton management, which includes former England front rower Dorian West, are said to be thrilled with the promise the big loosehead offers.

Other Noteworthy Names
Lock Jordan Onojaife, who made his first team debut this season, joins Hobbs-Awoyemi in the pack, as do flankers Lewis Ludlam and William Allman. There is also abundant quality out wide, with Rotimi Segun the highlight of the group, whilst his brother Tosin and Howard Packman are two more great prospects coming through at Franklin’s Gardens.
Allman and R Segun are two current England U18 squad members who could yet feature at this summer’s JWC, such has been the impressive nature of their performances in this year’s Academy League. If not, both should take part in the annual U18s/Schools tournament contested between England, South Africa, France and Wales.
The Saints academy has also turned into quite the fly-half production line, with Will Hooley, Sam Olver, Harry Mallinder, Gregor Haldane and Rory Hutchinson all featuring for the side over the last year or two. Hooley, Olver and Mallinder have all represented England at age-grade level, whilst Haldane and Hutchinson have their eyes set on emerging as rivals to Finn Russell for Scotland’s 10 jersey. Of the quintet, Mallinder could be the most intriguing prospect to watch, already looking like a well-balanced fly-half and is also proficient as the archetypal ‘second playmaker’ from inside centre.