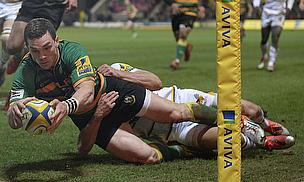 Northampton Saints beat Wasps 52-30 at Franklin's Gardens in a game which saw the visitor's Nathan Hughes sent off for kneeing Saints' winger George North in the head.

Hughes was ordered from the field for striking North after the latter touched down for his second try but the win put Saints 14 points clear at the top of the Premiership.

Despite the number eight claiming the collision was accidental, referee Craig Maxwell-Keys gave him the red card five minutes before half-time.

North lay motionless for a short period but was moving by the time medics stretchered him off the field.

Wasps had led 20-8 soon before the Welshman crossed the whitewash but went in at half-time 27-20 down.

And Northampton completed their turnaround by snuffing out a brief Wasps comeback in the second half.

Christian Wade crossed for the visitors as they landed the first blow, and his score was converted by Alex Lozowski.

North crossed for his first try after collecting a Stephen Myler cross-kick but Myler just missed his conversion, the ball hitting the post.

Lozowski landed a penalty after Northampton were penalised for offside and then showed a turn of pace to put Wade over once again. The fly-half converted to put Wasps 17-5 ahead and a penalty apiece preceded the match-turning incident.

North's try came from the re-start which was grabbed by Samu Manoa and in the aftermath, Wasps conditioning coach Dan Baugh had to be pulled away as he argued with Saints forward coach Dorian West.

Myler missed the conversion but found the touchline in the corner when Saints were awarded a penalty soon after, from which they earned a penalty try after a maul was stopped illegally.

And the home side repeated the trick once more before the break, although this time they managed to score in more conventional fashion as Alex Corbisiero broke off to dot down.

Wasps scored first in the second half through a Lozowski penalty and when Wade scored his second try, converted by Lozowski, that made the score 33-30.

However, there was to be no brave 14-man comeback from Wasps, as Northampton ran in three more tries - one from Ken Pisi and two from Ahsee Tuala - to notch up a half-century, two of them converted by Myler.