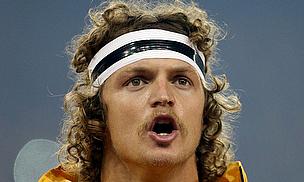 Gareth Anscombe kicked 17 points as the Chiefs beat the Reds 22-16 while Nick Cummins scored a hat-trick in a historic Western Force win over the Waratahs in the first two Super Rugby clashes of the day.

Fly-half Anscombe landed five penalties and converted Michael Fitzgerald's 15-minute try as the New Zealand side held off the Rebels, who were 19-0 midway through the first half.

Woodward also added three penalties to close the gap but the Rebels could not overhaul their hosts.

Anscombe had put the Chiefs ahead as early as the second minute with a penalty and another followed soon after as the Rebels' indiscipline cost them dear.

More indiscipline from the visitors gave Anscombe the chance to land another penalty in the 12th minute, which he took.

Fitzerald then drove over and when Anscombe converted, the Chiefs were 19-0 up and seemingly in complete control.

Back came the Rebels, however, Woodward scoring two penalties to go into the break 19-6 down and five minutes into the second half they crossed through Horie.

Woodward converted to draw his back to within six points of the Chiefs only for Scott Higginbotham to enter the sin-bin, enabling Anscombe to stretch the Chief's lead with another penalty.

Woodward scored another to make it 22-16 and keep the Rebels clinging on but he missed a 72nd minute chance and the Chiefs held firm thereafter.

Cummins touched down three times to hand the Force their fifth Super Rugby win on the trot for the first time in their history.

They outclassed Australian rivals the Waratahs to win 28-16.

Australian international Cimmins, affectionately known as the 'Honey Badger' has become a firm favourite at the Force Field and he increased his cult following with a hat-trick.

He scored the only try of the first half when he ran the full length of the pitch after intercepting close to his own line.

He was set up for his second score by Alby Mathieson and the third came after another long run.

Kurtley Beale touched down in the 66th minute for the Waratah's first try, making the score 25-16.

However, the Force were resilient in defence and held on for a win that moves them above the Waratahs and into second place in the Australian Conference, behind the Brumbies.

Ahead of the game, Israel Folau was a late withdrawal for the Waratahs after the Australia Rugby Union made a late call for him not to play after two weeks on the sidelines with a throat injury.

With the full-back watching from the sidelines, his team-mates dominated early possession and led 6-3 after 20 minutes thanks to a pair of Beale penalties with Sias Ebersohn replying with one for the Force.

As they went in search of a try a floated wide pass was cut out by Cummins, who raced clear to score with Ebersohn adding the extras.

Bernard Foley and Ebersohn traded penalties and at half-time, the Force were 13-9 up.

More pressure from the Waratahs after the break came to nothing as they were undone by more Cummins magic.

Matthewson burst through a gap after quick ball to send Cummins over for his second and his third sealed just the third hat-trick by a Force player in their nine seasons of Super Rugby.

Beale converted his own score soon after as the Force defence began to tire, but the Waratahs could find no further breakthroughs.

And Ebersohn made the game safe with a 72nd-minute penalty.

In the other two matches played today, there were away wins for the Crusaders and the Sharks.

Crusaders beat the Cheetahs 52-31 and the Sharks beat South African rivals the Lions 25-12.