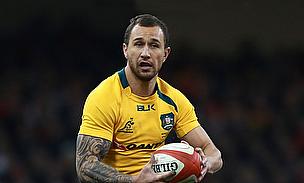 The Brumbies moved to the top of the Super Rugby standings by beating rivals Queensland Reds 23-20 in Brisbane.

They led 20-3 in the first half but had to cope with a Reds fightback that saw them close to within three points.

However, the Reds could not overhaul the Brumbies and the result is their fourth defeat in a row by five points or less.

The Brumbies started strongly and scored when Scott Fardy took advantage of a Quade Cooper mistake close to his own line.

Indiscipline from the Reds saw the deficit stretch to 10 points through the boot of Nic White, who then set up a first try of the season for Joe Tomane.

The Red then mounted a stirring comeback, with a converted try by Beau Robinson pulling the score back to 20-10 at the break.

Three times in the second half they went close to adding a second try. Will Genia was denied by the television match official, Rod Davies lost the ball in a tackle close to the line and Cooper spilled the ball before touching for what looked like a certain try.

At the fourth time of asking, they crossed following a powerful scrum, Ed Quirk muscling over before White added another three points to give the Brumbies some breathing space.

Cooper then landed a penalty to set up a grandstand finish, but the Reds were left with nothing to show for their comeback.