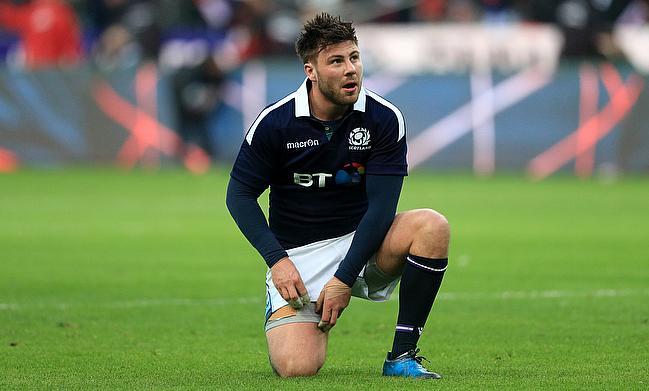 Ali Price made his Scotland debut against Georgia in 2016
©PA

Ali Price was blissfully unaware of Scotland’s loss at the hands of the Czech Republic.

Having watched the first half, the Lions squad went out for their second training session of the day when the next 45 minutes got underway.

Perhaps missing Patrick Schick’s second half stunner would have been for the best for Price, Chris Harris, Zander Fagerson, Duhan van der Merwe, Rory Sutherland and Hamish Watson as their home nation’s first crack at an international tournament in 25 got off to the worst of starts.

With several of the English contingent on Jersey beginning their preparations for the test against Japan in Edinburgh, it is unsure whether new friendships will become strained on Friday night when the two nations come face to face, but what is more definite is that preparations for the Lions is well and truly underway.

Arriving on the Channel Island over the weekend, players have been training at the Stade Santander International. With more players yet to arrive as a result of club commitments in the Top 14 and Gallagher Premiership, there is plenty of motivation in camp at the moment.

Playing Japan on June 26, Price is in with a shot of wearing the historic red jersey at Murrayfield in front of fans, something that Price has done just once since Covid-19 reared its ugly head. Coming off the bench in a 15-3 win over Edinburgh at Murrayfield that was played in front of 700 fans, the 28-year-old says he is looking forward to playing at his national stadium in front of friends and family.

“I am really looking forward to it to be fair,” Price said. “I have seen a few games down in the Premiership where they have started to get three, four thousand back in stadiums and it does make a massive difference to the energy of the place.

“Watching the football starting now, with the Euros, and just having fans back, it creates a buzz around the place and as players you can feed off that and there is nothing better than that to be honest.”

One of three scrum-halves currently in camp, Price is already amongst the two players he will be vying for places against next month in South Africa. Each of Conor Murray and Gareth Davies have prior experiences with the Lions, Murray having collected five test caps for the tourists, whilst Davies acted as cover on the 2017 tour of New Zealand.

One of eight Scots selected by Warren Gatland and his staff for the trip to South Africa, Price is keen not to just go along for the ride and is hoping that applying himself on Jersey, and then in the run in to the Japan game, will stand him in good stead for the weeks to come.

“No one is here to make up the numbers and I would be lying if I said I was just happy to be here,” Price said. “Obviously everyone is happy to be here, but we want to be involved as much as we can and those three games at the end of the tour are what we’re all gunning for.

“When the games start coming and squads start getting selected, everyone is a competitive guy here and it is about taking your opportunities when you get them in the games.

“I have just got to put my best foot forward in training over the next couple of weeks and it is massive for all the Scottish players to try and get themselves involved in the 23 for that Japan game.

“Our friends and family will be able to come and watch, albeit from the stands, there will be no meeting and greeting after the game, so it is a big carrot at the end of these two weeks.”

Price’s rise to the top of international rugby has certainly been an interesting one. Born in Kings Lynn and educated at Wisbech Grammar School, the 28-year-old qualifies for Scotland thanks to his mother and moved to play for Glasgow after a season in the Championship with Bedford Blues.

Growing into being a regular at club level, it was in 2016 when he made his debut for Scotland against Georgia. Regularly playing behind Greig Laidlaw for a period, it was questioned whether or not Price could play with Finn Russell at half-back, the pair regarded as similar players as a result of their dynamism.

Over the years each have matured and are a major part of the Scotland attack, which on its day can cause havoc against any side they come against. Now, with the attack being led by his national head coach, Gregor Townsend, for the Lions, it is hoped that the same attack can be used in order to better the Springboks on home turf.

Over the years, Scotland internationals starting for the Lions have been at a premium and with this current crop, it is very much hoped that plenty will get their chances in the Southern Hemisphere next month in the test series, especially if they stick to what got them the opportunity.

“I got a great message from Mike Blair (Scotland’s most-capped scrum-half) as well yesterday when we flew; it’s brilliant being selected and to make the squad, but don’t just be satisfied with that, you are there because you are one of the best three (scrum-halves) and it is up to you to go out there and make the most of the tour.”