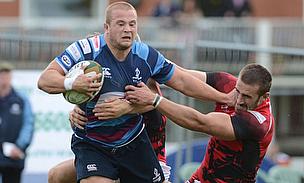 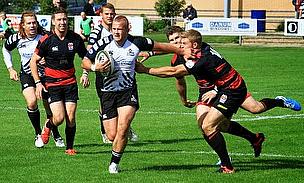 A modern day hooker must combine pace, power and an immense skill set with a flawless set piece and lineout ball. Long gone are the days of hookers slowly bumbling from breakdown to breakdown; chasing scrums and lineouts around the field.

The position is now one of the most dynamic on the field, as the modern day hooker aims to replicate the work of a flanker around the park. Legendary All Black hooker Keven Mealamu, who began his international career in 2002 and has amassed 110 caps since that day, trail-blazed the way for the modern day hooker.

Since then a number of other hookers have followed suit, with the likes of Tom Youngs, Dylan Hartley, Dimitri Szarzewski and Schalk Brits replicating the work of a back-row forward.

To succeed in any modern day front row the hooker must embody these traits. We at Talking Rugby Union are always on the lookout for ‘emerging talent’ – the next generation of players, and Manchester born hooker Tom Cruse seems to warrant such a title.

The young hooker is currently enjoying his second season in the Championship with, currently third placed, Rotherham Titans.

Tom began his senior playing career at Stockport Rugby Club alongside representative honours for Cheshire. Following on from a number of good performances and early signs of talent, Tom was signed by the Sale Sharks Academy.

However, after a season with Sale and a lack of opportunity with the first team he decided playing regular rugby in the Championship was the way to go. Hence, he signed for Rotherham and has so far been a complete revelation – a genuine X-factor player.

Tom is currently the top try scoring forward in the league with a number of man of the match performances to his name already and looks destined for great success in the game.

Talking Rugby Union spoke to Tom last week after the club returned to winning ways with a 17-11 home victory over Nottingham. Since then the club have won again, this Friday, with a 28-17 away victory at Plymouth Albion, to see the Yorkshire side move to second in the Championship table. Tom told us that the victory over Nottingham was incredibly important for the club:

“It was great to get a win under our belts again, after suffering two defeats on the bounce to first Leeds Carnegie and then Bristol. But as a whole, and for me personally, it’s going really well.

“We’ve got a great position in the table at the moment and as a unit we are completely focused on getting into those playoffs at the end of the season.

“The boys have bonded really well this year, ever since pre-season training, and there’s a great atmosphere within the team at the moment.”

Following on from this Tom recalled his time at Sale, where he was from November to the end of the season, but explained that his tenure was really a ‘game of two halves’:

“The first couple of months were brilliant, sort of a honeymoon period for me as it was my first professional contract. However, after that it began to come clear that I wouldn’t play too much of a part in the first team squad so I was moved into the background a bit.

“I felt like my development stopped almost at that point, which got me down a lot, I have to say.

“But I was thrilled to eventually get a full contract with Rotherham and now I finally feel like I am starting to develop as a player again.”

When asked whether he has witnessed much difference between the Championship and England’s top flight, Tom praised Rotherham Head Coach, Lee Blackett for leading a great club:

“He likes everyone to be able to express themselves in training; he’s happy to let people make mistakes but a lot of that is because he wants us all to try stuff and experiment.

“He wants everyone to be able to handle the ball and to use their skills properly and efficiently – expressing themselves on the pitch.

“It’s a much less intense environment, I would say, but we’re always working hard; doing lots of fitness and contact work every week.”

When asked about his and the club’s ambitions this season, Tom was quite reserved about talk of the Premiership; maintaining that Rotherham are focussing on “each game week-by-week.

“With those two defeats coming a few weeks ago it was sort of back down to earth a bit, but as I say we are just taking each game as it comes.

“We’ve not really talked about promotion yet and really just want to concentrate on getting a win each weekend.”

Personally, for Tom, the big thing is staying a regular fixture in the starting line-up each week and gain exposure to such a high level of rugby:

“The biggest thing for me is playing every week. I think, to develop, you have to be playing and for me this is the highest level I have ever played at and I’m absolutely loving playing each week. I can tell I’m developing as a player and as a hooker.

“Obviously I’ve still got a way to go, but as long as I’m in the side and know I’m moving in the right direction I’m happy.”

Following on from this Tom credited some of the older members of the Titans side for helping greatly with his development:

“I’ve got a lot of respect for the older players in the team, especially the likes of Collin Quigley and Marshall Gadd, who I have played in the front row with for the most part of the season.

“Aside from them, though, when we played against London Welsh this season Andy Titterall [former Sale Sharks, England and British Lions hooker] was playing as my opposite number and I used to watch him a lot – he has always been a big inspiration for me since I was a young lad.”

In addition, an important point we at Talking Rugby Union have looked into in great detail this year is the IRB change in scrum laws and the effects such changes have and will have on the dynamic of the game. For Tom, a key feature of the front row of the scrum, the change in laws have played an enormous and vital role in his game.

Tom said that he has “had to adapt to them from right at the start of the season” and did lament that “as a hooker he does now feel slightly exposed at scrum time.

“It’s a lot easier to get cramped in the middle of a scrum, because the gap between is obviously now a lot less.

“We do a lot of work on that area each week, with two dedicated scrum sessions with our forwards coach Micky Ward and are constantly trying to improve it.

“But, yeah, there’s no doubt that it has changed the game; I didn’t expect there to be so many resets – as that’s what I thought they were trying to change – but, it is what it is, I just try to get on with it as best as I can.”

Finally, when asked about his future, Tom added that “I’m still looking to develop as a player and, if I’m completely honest, I think I still have a lot left to learn.

“So whether that means staying here at a Championship club or not we will see in the future; but to be honest, I’m very happy here at Rotherham.”

The Titans, currently second in the Championship, welcome eighth place Bedford Blues to Yorkshire when the league gets underway again after Christmas on the 26th of December.