Tom Calladine - 'Showing People what I'm all About' 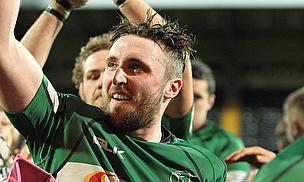 Tom Calladine - 'Showing People what I'm all About'
©Nottingham RUFC 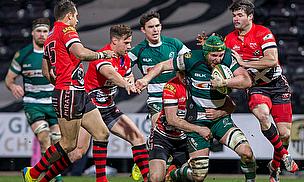 Tom in action for Nottingham against the Cornish Pirates
©Nottingham RUFC Tom in action for Nottingham against the Cornish Pirates
©Nottingham RUFC

Nottingham flanker Tom Calladine, at just 24, already has a long list of accolades to his name, with England caps and rugby abroad in New Zealand being just two of them.

The Mansfield-born forward signed for Nottingham three years ago, and at 23 he had already captained the Championship side in a number of games.

Tom also excelled in age-group rugby with representative honours for England U16s and U18s, whilst studying at Hartpury College.

Tom combines pace, power and aggression to thrive in the RFU Championship and, still a youngster in the professional game, he looks set to accomplish big things.

Nottingham are currently enduring a disappointing season by their standards, as they sit tenth in the league and Tom admitted that this season has “been a bit of a struggle.

“Last year we finished really strongly in second,” Tom continued, “but with that sort of success comes the loss of players, as a number of key guys moved to contracts in the Premiership.

“It’s been a hard slog trying to re-build a group of players, and we are there or there abouts, but it’s just that last little bit that we need to sort out for those last three points or the last try of the game.

“In the Championship it can be just things as small as that that mean we are second from bottom rather than second from top.”

However, on a personal level Tom admitted that his own season has been going really well.

“It’s  been good,” Tom replied, “last year I featured a lot off the bench, coming on in games more than I started, but this year I’ve managed to turn that around and cement myself in the back-row at 6,7 and 8.

“My preferred position is 8 but I try and change my game for each different role.

“Obviously we don’t have quite as much front-foot ball as we did last year, so you have to try and make your own luck in the game, but it’s been good; it’s been nice to get plenty of games under the belt and get some good performances in really.”

Previously to Tom’s time in the Championship, though, the Mansfield flanker was presented with the opportunity of a lifetime – to play rugby in New Zealand.

In his first year with Nottingham (3 seasons ago) Tom was still playing for Mansfield, but trained with Nottingham and featured in a number of their cup games. In the summer of that season Tom was given the opportunity to play in New Zealand’s powerful Canterbury Metropolitan Competition for Linwood, based in Christchurch.

Calladine and Nottingham teammate Ollie Taylor were given the chance to develop their game on the other side of the globe after impressing in the club's run to the British and Irish Cup quarter-finals.

Whilst Calladine's Championship opportunities were limited, his form for Mansfield in National Division 3 made him impossible to ignore.

Within a week of touching down in New Zealand, Calladine had forced his way into Linwood's starting XV and seamlessly adapted to the Kiwi's expansive style of play.

“The set-up out there is a bit different to what it’s like here in England,” Tom explained, “I played in the highest league in Canterbury, but the lads from the All Blacks and the Crusaders all come back and play for their clubs in the league; so you can be playing against All Blacks one week and then against them the next.”

Included in his time over there Tom frequently trained one-on-one with 2011 Rugby World Cup Winner, Owen Franks, which he described as an experience that transformed him as an athlete.

“I had a couple of good battles out there with both of the Whitelocks,” Tom said modestly.

“Some of the Crusaders that dropped out played with us, so the likes of Willie Hines and Sean Maitland – good players who have all featured a lot in the Super 15s and have done for a few years.

“Obviously Sean Maitland has come over here now, plays for Scotland and has been capped by the Lions – so it was a god standard.”

Tom admitted that the style of rugby was much different out there:

“As in England where there’s always a lot of emphasis on the set-piece and a big forward pack dominating the whole of a game, it’s completely different out there, as you would expect, because the set-piece is really nothing more than just a way of generating ball, quick ball.

“I went over there with the very English mentality of driving to run over the top of things and bully other packs but they just see the forwards and set-piece as another way of recycling quick ball.

“As soon as you get to grips with it, though, you can understand why, because they want to be playing a fast free-flowing game with offloads and as soon as the forwards get into open play they become just as good ball handlers as the backs really.”

Tom said that he was ever grateful for his experience and that the experience has bettered is game immensely.

“Before I went my game could be a bit one dimensional, but now I’m always looking for offloads and the chance to keep the game alive, which I wouldn’t necessarily looked for pre-New Zealand.”

Tom then recalled some of his England days and his greatest memories. One which particularly stood out was “for the U16s and a tournament at Millfield, where I got asked to be captain against Wales.

“Unfortunately in the last play of the game they scored a penalty to draw the game at 13-all.”

Finally, Tom spoke about his ambitions in rugby, but admitted that “he is not looking too far ahead.

“I’ve always wanted to play professional rugby and I’ve been offered the opportunity to do so at Nottingham, I know the Premiership is a step-up again from that – I never try to look too far forward, but obviously there is always a dream there.

“I do think I would be good enough to feature in most Premiership teams, so it is really all about doing my best for Nottingham and then getting noticed and getting that one chance to show the right people what I am all about.”