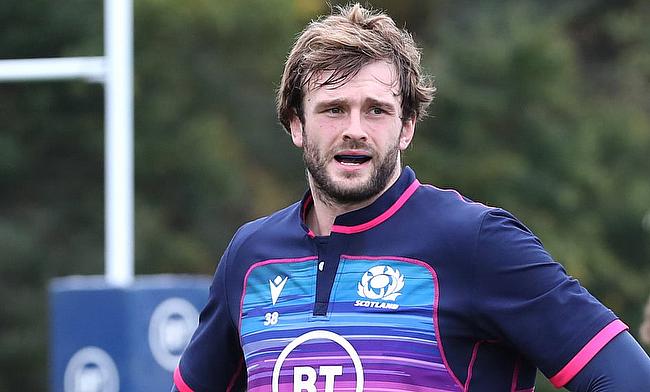 Scotland's Six Nations game against France given green light
“I think I’ve come on a lot”: Johnny Matthews keen to make his mark with Glasgow
Scotland v Wales: Players keen to make Warren Gatland sit up and take note
Price is getting it right: “Ali does everything with a smile on his face”

The fact that Richie Gray, a man with 67 caps under his belt, is likely to be named only as a replacement against France this weekend shows the strength and depth Scotland now have in the second-row position.

However, to say Gray’s possible inclusion on the bench is down to any kind of dip in form would be completely wrong. In fact, he has had to battle back from injury and earn his right to be part of an exciting squad which Gregor Townsend is piecing together.

Indeed, after Gray won cap number 65 for Scotland off the bench against Italy in Rome in 2018, many wondered if we would ever see the 31-year-old on the international stage again.

Last summer, a move back home to his first club Glasgow Warriors - after seven years in France with Castres and Toulouse - seems to have galvanised the player who has also played for Sale Sharks in a top-notch career.

The first choice Scotland second-row pairing of Gray’s younger brother, Jonny, and Scott Cummings was always going to be a hard one to break up, but he has beaten off competition from the likes of Grant Gilchrist, Sam Skinner and others to play his part in the 2021 Six Nations against England and Wales thus far.

Someone who knows Gray better than most is former Scotland man Johnnie Beattie who will be in the Stade de France in Paris carrying out broadcast duties while the third-round clash in the tournament unfolds on Sunday afternoon.

The 35-year-old won 38 international caps between 2006 and 2015, and he knows French rugby well having served Montpellier, Castres and Bayonne with distinction before retiring last year. Beattie and his young family also still live in the south-west of France between Biarritz and Hossegor.

“I am extremely pleased to see Richie back in the mix. He is a real grafter,” Beattie, who now hosts Le French Rugby Podcast alongside Benjamin Kayser, told TRU.

“I played with Richie for a long time at Castres and then saw his injury woes at Toulouse, where he struggled to get fully fit for any length of time.

“The fact that he has headed home to Glasgow seems to have helped him and you have to remember that he is a Test Lion and Scotland will be delighted to be able to utilise someone of that experience off the bench.

“He was dominant in the 1872 Cup matches around the New Year time when Glasgow played Edinburgh, both in the lineout and in the loose, and to have someone as experienced as him coming back into things refreshed is amazing for Gregor Townsend and his squad.

“I know there’s been a focus on creating a squad where we’re very open and have a relaxing environment that people are happy to be a part of."

Richie Gray is happy to be back involved with Scotland.

“We are spoilt and lucky to have someone like him around again and whichever second-row pairing Scotland have on the pitch is strong because Richie, Jonny Gray and Scott Cummings are all excellent players.

“Jonny has matured in the last couple of years and he has quickly made it over the 50-cap mark. He seems to be enjoying his rugby right now and is controlled in what he does in both attack and defence.

“Scott Cummings brings another dimension to the second-rows that Scotland have available just now through his physicality and the ability to carry ball and get over the gain line. The Scottish second-row stocks are looking very good just now.”

Gray warning: “We have to be at our best to win.”

With the France-Scotland game only having been given the go-ahead on Wednesday afternoon by the Six Nations Testing Oversight Group (TOG) after several Covid cases in the home squad, many expect Townsend’s charges to be favourites on Sunday.

That notion stems from the fact that France will be missing a number of their frontline players, but you would be very foolish to write off the hosts.

After all, Scotland have not won in Paris since 1999 when it was still the Five Nations and the current crop of players are still smarting from a 25-24 home loss to Wales in round two.

“We certainly have the talent in the squad to win over there, but it will be a really tough encounter and we have to be at our best to win,” Gray said this week.

“The challenge will be just as tough [against a perceived weakened France side] because French rugby has got crazy depth.

“A good example of that was the England game in the Autumn Nations Cup which was against what was dubbed the French third team, but they went over to Twickenham and almost pulled off a victory.

“They can call on a lot of players. There is a lot of talent. Any time you play France in France, it’s going to be a really tough challenge so we need to be prepared for it.

“It’s a few years since we won there - 1999 was the last time - so it’s a great opportunity to go over there and produce a performance and hopefully get a win.

“Myself personally, I’ve been delighted to be back involved in the camp. There’s a great buzz about the place and it’s always a privilege and an honour to play for your country. I’m doing the best I can for the team when I get the chance.”

The Scotland squad for the France match is due to be named on Thursday lunchtime.

France v Scotland kicks-off at 4pm local (3pm GMT) on Sunday and is live on the BBC.