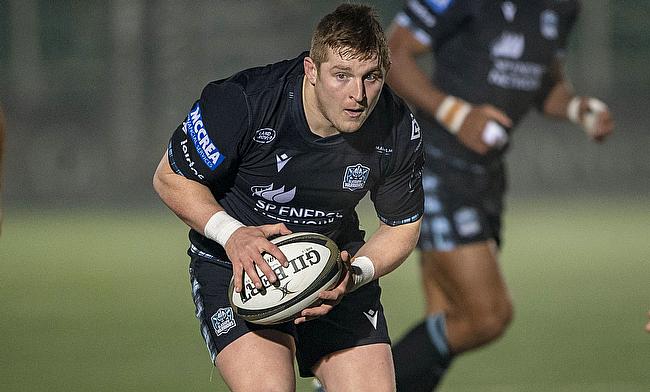 With players on Six Nations duty and some of them being in an international bubble for several weeks, it could be causing some head coaches in the Guinness PRO14 some headaches.

For example, Danny Wilson at Glasgow Warriors is likely to be without a large batch of top-level players for most of the remainder of the league season which runs until the end of March.

While the likes of George Turner are with Scotland, though, it gives players such as fellow hooker Johnny Matthews the chance to shine at pro level and put his hand up for a contract extension come the summer.

Since moving north of the border in 2017 to play for Boroughmuir in the Premiership, Matthews has impressed many with his athletic displays around the park and try-scoring ability.

Two good seasons at club level and Scotland Club XV honours - as well as a training stint with Edinburgh Rugby - put Liverpool-born Matthews in the shop window and since the summer of 2019, he has been in and around the Glasgow set-up.

A few cameos off the bench have highlighted his capabilities, and now he wants to seize his chance, starting against Ulster on Friday evening at Scotstoun.

“I’m looking to string a few games together while the boys are away and make the best of that opportunity,” the 27-year-old, who is battling for the number two jersey with Grant Stewart (if released from Scotland bubble) and Fijian Mesu Dolokoto currently, told TRU.

?? | @seanskennedy and Johnny Matthews have both signed contracts extending their stay at Glasgow Warriors ahead of the start of the 2020/21 season.

“I think I’ve come on a lot working under first Dave Rennie and now Danny Wilson. My game fitness, game play and game understanding have all developed, and now in the next few games, I want to prove I should be in that matchday 23 more regularly.

“Boroughmuir is a great club, but I knew that if I wanted to kick on and become as good a player as my potential will allow me to, then I had to move up to this level and give myself a chance.

“Getting asked to train with Edinburgh for cover after my first few months at Boroughmuir made it a realistic goal for me to try to stick around for as long as possible in Scotland and try and make it as a pro.

“I was frustrated last week with the call-off [against Benetton], the whole squad was to be fair. We had prepared really well ahead of it, but you can’t do much about the Scottish weather.

“We’re a tight-knit group here at Glasgow with a good culture that has always been prominent. The boys stay close and together and train well.

“The players and the coaches have been really good at keeping the group together [during a disrupted season]. We’re just looking to get all of the next few games on the fixture list played. We’re going to push to make the Champions Cup again [for 2021/22] so that’s our aim as a group.

“We’re very confident we can do that. We’ve got a couple of really big games coming up [Ulster and Leinster] and Ospreys have still got to come here as well which will be a great opportunity to claw back some points.”

“Support & Offload has really started to kick on.”

It has been a tough campaign for Glasgow to date, winning just three of their 10 completed league matches to sit fourth in Pool A of the PRO14.

However, as Matthews - who has previously played for the Leeds Academy, Otley, Sedgley Park, Rotherham Titans, Hull and Sale Jets - stated they have some big matches around the corner which could throw them up the table if they can secure positive results.

And something positive Matthews did last summer was climb the equivalent height of Mount Everest in under 24 hours at Boroughmuir’s Meggetland clubhouse in Edinburgh with his former teammate Tom Wilson.

It was to raise funds, but also to raise awareness of mental health issues in sport as the Support & Offload charity was formed.

Well done to @wilsontom10 and @JJEMatthews on completing their mental health charity challenge, over £2,500 raised so far!

“Support & Offload has really started to kick on and Tom Wilson’s done a great job with taking that forward and hopefully it’s something that can be utilised by sports clubs in Edinburgh and Scotland,” Matthews states.

“Here at Glasgow, we have a very tight-knit group and those of us not playing internationally have really bonded. Everyone’s in it together.

“All the boys get around each other. It [mental health issues] is certainly something that’s talked about more openly now than previously. The club are great as well, providing outlets if people need them.

“The boys are pretty good at staying together, staying connected and making sure everyone’s all right.”

Glasgow Warriors v Ulster in the Guinness PRO14 is on Friday at 7.35pm and is live on Premier Sports.