Price is getting it right: “Ali does everything with a smile on his face” 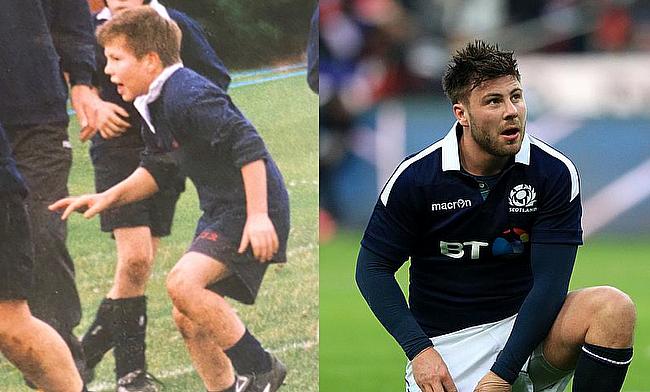 Hogg’s band of brothers are playing for each other and their families - and it showed against England
Jack Cosgrove Column: 'England are an excellent side, but there will be a quiet confidence in the Scotland squad'
“It’ll be a good battle” - Hamish Watson looking forward to breakdown contest
“Emotionally we were put through the wringer”: Twickenham 2019 from a Scottish perspective

When Scotland’s famous Calcutta Cup victory over England was confirmed last weekend, one of the first photos Scottish Rugby shared on social media to mark the occasion was of scrum-half Ali Price roaring with elation.

Not surprisingly, the 27-year-old had a massive smile on his face and no doubt that continued in the hours after the game as he thought about - and called - friends and family.

Among all the celebrations at Twickenham, the Glasgow Warrior may also have thought back to the good times he spent at Wisbech Grammar School. All of Price’s schooldays were spent in Cambridgeshire, and he has always kept in touch with the teachers and coaches who helped him along the way.

Only last week in the lead up to the first round of Six Nations matches, he was on a Zoom call with some of the current Wisbech pupils who are balancing their schoolwork with sporting pursuits.

A historic win at Twickenham! ??

The first time since 1983 ??#AsOne pic.twitter.com/qN8Gf1MQcQ

“The fact that Ali gave up his time in the build-up to such a big game to log on and speak to the group of pupils tells you everything you need to know about his character,” Phil Webb, Wisbech Grammar School, Assistant Head Sport and Partnerships, told TRU.

“He was on the same journey as them once and it was really interesting for them to hear from him about the last few years and the highs and the lows that he has had.

“Ali has had to battle to get to where he is now, overcoming things such as bad injury and online trolls, but he does everything in life with a smile on his face and that is just so refreshing.

“Although most people associated with Wisbech Grammar would have been wanting England to win on Saturday, seeing Ali come back from a tough first 10 minutes [when a couple of his kicks were charged down] to play a great game dulled the pain in defeat.

“And the photo of Ali that popped up soon afterwards on social media, that big grin is certainly something that all of us at the school have seen a few times over the years and we are very proud of him.”

“He was the smallest lad growing up, but he was very talented.”

While at Wisbech, Price, who now has 38 Scotland caps and is set to start again against Wales in round two of the Six Nations this coming Saturday, was very good at rugby, cricket and hockey.

“He arrived here in Reception year when he was about four and I taught him until he was 18,” Webb continued. “We start sport when the children are pretty young here. Ali would have played touch early on while the youngest ones now play tag rugby, and it is a good way to introduce them to the game and see what skills they have.

“The key at that age is enjoyment and Ali was the smallest lad growing up, but he was very talented. Indeed as he got older, it became clear that he was a very good rugby player, a very good cricketer and a very good hockey player.

“This was shown up well when the school went on a tour to Barbados and Ali impressed many over there with his skills in all three sports. He was also in the school athletics team and he was just one of those kids who you could see had the talent to go on to quite a high level.

“In his younger days in terms of rugby, he sometimes played a year up as a full-back just so he could find space on the pitch and express himself and by his final year, he was playing scrum-half and stand-off in the first XV.

“He worked very hard on the sports field and key to his progress into senior rugby was the link-up with the Bedford Blues Academy which we managed to set-up when he was 17.

“The coaches there took him under their wing and he worked his way through there to their first team before the move to Glasgow - and the rest is history.

“I am really looking forward to watching him in the rest of the Six Nations and the Wisbech Grammar community will be cheering him on.”

Scotland v Wales: “We want to try and make people at home smile.”

Many have remarked that the Scotland playing group look as tight a unit as they have in a while last weekend.

Price himself agrees, but also knows that as well as playing for each other, they are out there to perform for the whole country during these strange times.

“There are a lot of people who are stuck at home who can’t have fun, go to the gym, go to training, see their friends etc, etc so we are there to try and make them smile,” Price said ahead of the BT Murrayfield match up with Wayne Pivac’s men.

When Redpath/Cherry were given the chance to lift the Calcutta Cup, it was far more significant a moment than just a good photo opportunity, it showed the culture that @StuartWHOGG_ is building within the @Scotlandteam squad - more via @TalkRugbyUnion

“If someone is sat on their sofa on Saturday afternoon, we want to make them smile, give them a reason to be proud and give them some positivity if they have had a tough week or not seen anyone.

“We want a bit of that dogged side that a lot of Scots carry in us. It is not lost on us how lucky we are to be doing what we love. We want to make people proud.

“Saturday against England was a great start to lift the mood. Now we have to kick on.”

To date in his international career that stretches back to the Autumn Tests of 2016, Price has come against Wales five times, winning two and losing three.

The most painful of those was a 34-7 defeat in Cardiff in the Six Nations in 2018 and although Wales will be missing a few players through injury come the weekend, Price knows they are still dangerous opposition.

One player he and his teammates will be keeping a keen eye on will be Liam Williams who looks likely to be back in the fold after a suspension to earn a 68th cap for his country.

“He is a brilliant player. His all-round game is very good and he’s great in the air,” Price said of the Scarlets back three man.

“He’ll obviously add to the firepower that Wales have. They’re looking to play a more attacking game now and he’s certainly an attacking threat for them.

“They’ve got good depth and they’re a good side. They pose different challenges to other teams. I focus on doing my job to the best of my ability to get the team on the front foot.”

Scotland v Wales in the Six Nations kicks-off at 4.45pm on Saturday and is live on BBC.