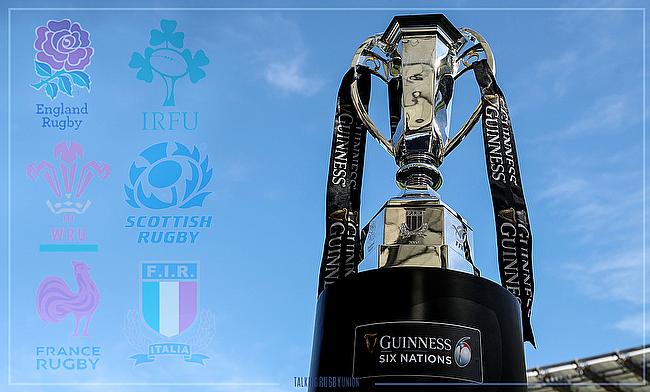 Johnny Sexton hoping to be fit for Six Nations opener against Wales
England call up Harry Randall and Paolo Odogwu in Six Nations squad
"We are enormously grateful for this opportunity" – England’s Eddie Jones on his Six Nations squad
Opinion: Vanishing van der Merwe a blow for Edinburgh, but Watson was a key man they just couldn’t afford to lose

The build-up to one of the most captivating tournaments in the rugby calendar has been overshadowed by the threat of Covid-19 and with just over a week to go until the start of the championships, the global pandemic is at the forefront of people’s minds.

Morel admitted his team are still awaiting full confirmation from the French government that all fixtures will be able to take place as planned, but because the UK is no longer part of the European Union, it would mean anyone travelling from these shores over to France would have to spend seven days in isolation.

England, Scotland and Wales have tightened their Covid-19 protocols after French sports minister, Roxana Maracineanu, wanted reassurances about the extra measures each country was putting in place.

Six Nations officials have begun work on some contingency plans if games are needed to be rescheduled, but Morel hopes they will receive the green light from the French government.

Despite these uncertain times and the hurdles surrounding the competition, there was certainly no lack of passion and sporting rivalry on show during the tournament’s virtual launch.

England head coach Eddie Jones was quick to set the tone and he deflected any fervour around his Six Nations champions over to France: “The great thing for us is that we know you guys [the media] love France so keep loving them. Keep telling them how good they are. We’ll just worry about France when we play them."

The mouth-watering clash between the two tournament favourites is set for March 13th at Twickenham and one of a variety of reasons why we, the media, are excited by France is because Les Bleus were the only side to beat England in 2020.

Fabien Galthié's team came extremely close to securing back to back wins over Jones’ charges in the Autumn Nations Cup final - despite fielding an inexperienced side - but the boot of Owen Farrell guided England to their second piece of silverware in five weeks following their Six Nations triumph.

England last retained their Six Nations title in 2017, but with his team now on an eight-game winning run, Jones insisted they were ready to evolve again.

?? "We want to be a team that dominates the opposition."

“We are not defending the title,” he said. “We are going to win the title so that is the first thing. We all start on the same starting line. No-one gets a head start so we are looking forward to it. They are called championships because you want to be the champion. It is abnormal to win and we want to be abnormal. Only one out of the six teams can win. That is our number one aim.

"It is like when you play a Test match game of cricket. The end result is to win the game and not to draw. We want to win the championship. How do we want to evolve as a team? We want to adapt and we want to make sure we are playing at our best every game.

“Twelve months ago, we never thought we'd be doing this conference by Zoom, and we have to evolve as people and adapt. There is a new world now and a new world of rugby coming up in the Six Nations where the team that adapts the most to the new world will be the most successful.”

So why does Jones think we focus too much on France? Well, 2020 saw French rugby's rebirth under the guidance of Galthié, and his young and vibrant squad were not far away from clinching the titles which are currently sat in the Twickenham trophy cabinet.

"What really matters is to play and look at the score at the end and for now, Eddie Jones’ team won the two competitions last year so he can be proud of his work and his team. We hope to do better than we did in 2020 by continuing to try to develop our rugby, our game and to grow the team.”

England’s defence of their Six Nations crown begins next weekend at Twickenham when they host the auld enemy, Scotland, 150 years after the first-ever match between the sides.

Of course, the Calcutta Cup will be on the line and despite it not being a favourable start to the tournament for the Scots, head coach Gregor Townsend and skipper Stuart Hogg are relishing the challenge of securing their first victory at England HQ since 1983.

“We are playing one of the best teams in the world, a team that won last year’s Six Nations,” Townsend said. "There is no bigger challenge than England away and it is a big game for our people and our nation. We play for a trophy so it is the biggest game wherever it comes in the calendar, but it focuses our minds. We will have to be sharp.”

Hogg added: “If you give them [England] time and space, they are going to be dangerous. If you get in their face and make it confrontational, then it makes for a tasty encounter. We are massively excited for it, and we have got some great preparation time now to make sure we are in the best place possible to go down to Twickenham and pick up a win."

Townsend, who is set to have star man Finn Russell available for the tournament's duration, was also pleased by the momentum Scotland were able to generate at the end of last year’s Six Nations following three successive victories.

The Scotland boss is targeting a similar sequence of form during these championships, but for Italy, positive consistency is something they are desperately craving.

Franco Smith’s men are on a six-year winless run in the tournament, and after a challenging first 12 months in the job, the Italy head coach feels 2021 can be a fresh start for the Azzurri.

“The big challenge is not to speak about it [the 26-matches without a victory] too much and to try and work hard. It is clear to us that there is a big expectation around winning that first game for a while, but we don’t just want to win one. We want to win consistently. We want to be sustainable in our approach.

After a difficult 2020 for @Federugby, @SmithrugbySmith is looking ahead to a brighter future ??

The Italy head coach believes the upcoming Championship is a fresh start for his side, as he bids for his first win in charge ????https://t.co/RUV6PflI2h

“This is a new start for Italian rugby and over the next 20 years or so, we want to be progressing and bringing through more players, more quality, more international athletes.

“We want to set the standard. We want to make that physical step up so that we are competitive. We have seen that in the [Autumn] Nations Cup. Unfortunately, when we want that win too much, we make errors towards the end of the game, like we did against Scotland. As soon as the scoreboard is aligned and we even the game, we started looking too much at what we want instead of what we must to do to win it.

“We want this monkey off our back and we are really working hard to get it off our back."

One of the key omissions from Italy’s squad is Sergio Parisse. Having represented his country on 142 occasions, Smith admitted the door isn’t shut on a return to the national side for the Azzurri legend – who has expressed his desire to play one final match for his country.

From one stalwart of the game to another and Wales captain Alun-Wyn Jones is nearing a full return to fitness ahead of the Six Nations. The Ospreys second-row hasn’t played since sustaining a knee injury during the Autumn Nations Cup, but head coach Wayne Pivac will be keen to have his talismanic leader available for their tournament opener against Ireland.

Pivac’s side had a turbulent 2020, losing seven of their 10 Test matches, but one positive for Wales was the depth they were able to develop during the autumn, and Jones feels their pool of talent can help the side move forward over the coming weeks.

“The strength in depth we developed in the Autumn Nations Cup, I said to some of the guys it’s arguably a watershed moment in the number of caps that were gained,” Jones said.

“You probably wouldn’t have seen that over two-and-a-half, three years previously. It had to be done and took a bit of hurt doing that.

“But we have a squad now that’s exciting and excited to prove a point in this Six Nations, with a layer of experience and other internationals who have not been selected for this campaign, but are ready to step into the breach.”

Pivac also described their first fixture against Ireland as a ‘formidable challenge’ as Wales aim to hit back after two defeats against Andy Farrell’s side last year.

In terms of Ireland, they still had a mathematical chance of winning the 2020 Six Nations on the final day of the championships, but they fell just short despite their best efforts in Paris.

Farrell will be satisfied with the steps Ireland made during his opening year in charge and he feels his side are not far away from closing the gap between themselves and the tournament favourites.

"It's always an honour and a privilege to get asked to do the job." ???

“My job as head coach is to make the team as good as they possibly can be and to play to our potential," Farrell said.

"You guys have come in today, and rightly so, have highlighted there is a pecking order at this moment in time where two teams are going in as favourites and we aspire to be that. That comes from hard work and performing under pressure. We want to be back up there come the end of this tournament.

“I don’t think we are far at all [off challenging England and France]. We made a couple of comments at the end of the autumn. We know where we are going and we know how far we are from being there. We thought we made good strides, but this is it now. The Six Nations is a fantastic competition and it is there to be won by a number of teams and we will be looking to do that. We need to keep getting better."

Ireland captain Johnny Sexton added: "We have a massive game first up against Wales and then we can focus on France. Hopefully for us now, our focus is on making sure that final game against England, there is something on the line and there is something to play for. It will be a good barometer to how we have improved. That is where we were last year against France and we didn’t turn up on the day and we want to put that right."