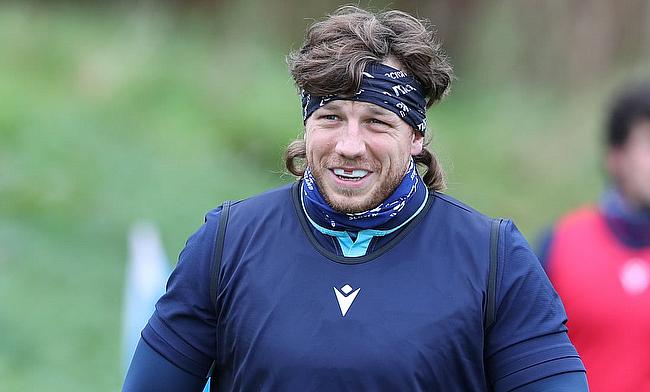 Hamish Watson is enjoying his time with Edinburgh
©Rugby People

When Duhan van der Merwe’s departure from Edinburgh Rugby was confirmed on January 4, there was great disappointment in the Scottish capital.

The frustration from supporters centred around the fact that the South African-born winger seemed to be leaving at the first opportunity after he had ‘locked himself in’ with Scotland having earned his first batch of international caps via residency at the tail end of 2020.

The supporters were also worried that his signing for Worcester Warriors would signal a talent drain from the Guinness PRO14 outfit. Their fears were not allayed when news of second-row Andrew Davidson’s departure for Gloucester ahead of 2021/22 became public knowledge 24 hours later.

For his part, Edinburgh head coach Richard Cockerill was also disappointed with the van der Merwe news - “we’ll be disappointed to see Duhan go, he’s a quality player” - but at the time stated “it’s just market forces” and that the club had to “cut our cloth accordingly to stay competitive across the squad”.

And therein lies the crux of the dilemma that coaches at a pro-level - especially those away from England and France - face on a seasonal basis, having enough quality cover across a whole squad of 40 plus players while also paying top dollar for some ‘X-factor’ stars.

When van der Merwe, now 25, joined Edinburgh in the summer of 2017 on a two year deal from Montpellier, it was not a signing that grabbed the headlines.

However, by the time he put pen to paper on his second deal at the club, everyone knew who the former South Africa under-20 internationalist was given that he had scored 28 tries in 53 appearances in just over two years.

The tries just kept on coming for the big man and with his hope of representing Scotland from the summer of 2020 in the public domain by then, it was obvious that suitors from elsewhere were going to be interested in someone of his talents.

He then scored on his Scotland debut in a friendly versus Georgia before the delayed Six Nations were completed and then the Autumn Nations Cup took place.

All the while van der Merwe’s stock was rising along with the value of his next contract.

In recent months, Cockerill will have had to weigh up which of his main men he most desperately wants to keep going forward - and given back-row Hamish Watson’s importance to the squad as a leader - he decided to hand a handsome contract to him.

That is not to say that Edinburgh did not offer van der Merwe good new terms, but when push came to shove they knew that they had to keep hold of Watson, especially with Racing 92 rumoured to be circling.

And of course, it was not a straight ‘Hamish versus Duhan' battle for a new, improved deal - other key men like Jamie Ritchie, Viliame Mata, Darcy Graham and Blair Kinghorn are among the big players coming out of contract in the summer who have yet to be tied down - but Cockerill has to manage his budget carefully and to get Watson to sign on the dotted line so early is a coup.

James Lang and Glen Young discussed the importance of our new stadium in making the move north this summer.

Visit our #HomeAtLast hub below.

One thing in their favour when trying to prolong Watson’s stay at BT Murrayfield was that he has a young family while it would have been easier for van der Merwe to up sticks and relocate.

However, at the age of 29 and at the peak of his powers, openside Watson may have been tempted by a big move elsewhere.

Along with Stuart McInally, Grant Gilchrist, the aforementioned Ritchie, Henry Pyrgos and Chris Dean, Watson - who has 36 Scotland caps - is one of the senior players at Edinburgh.

The 'all action' character is the kind of player that leads by example and with exciting young back-row players like Luke Crosbie, Connor Boyle, Rory Darge and Ben Muncaster coming up through the ranks, the knowledge he will be able to pass onto them around the breakdown and suchlike will be invaluable.

When he talks, other players listen and he has a big influence in the changing room. The whole dynamic pushed by Cockerill and his coaching team around what Edinburgh are - built on a strong pack, hard-working, tough to beat, punch above their weight -  is encapsulated by Watson.

"We’re delighted he’s staying - any coach would be happy to have him - and will continue to bring his relentless approach to rugby every time he takes to the field,”  Cockerill said.

Yes, Edinburgh will miss van der Merwe’s talents on the wing from 2021/22 onwards, but when you have to cut your cloth - as those in Scottish Rugby have always done and now everyone is doing in these Covid-19 times – tough decisions and choices have to be made.

Van der Merwe can create magic moments in a match, but Watson is a regular 8/10 man, covers every blade of grass and is a role model to the younger players at Edinburgh so his re-signing was needed more in these tough times.

Glasgow Warriors take on Edinburgh Rugby this Saturday in a rearranged Guinness PRO14 game at 5.15 pm live on Premier Sports.