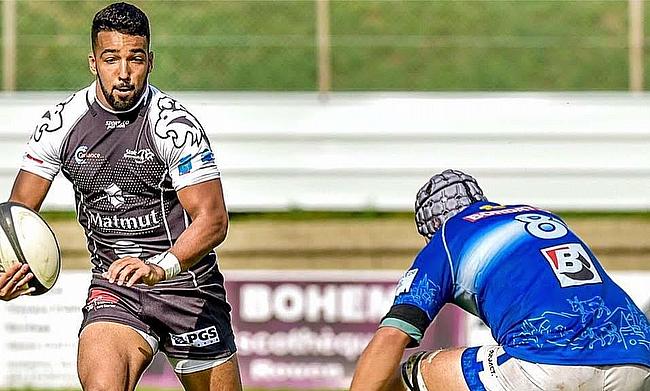 Rising star Brett Connon out to impress and push on at Kingston Park
Simmonds shaping own future at Exeter
Being with England was pretty crazy, but my short term aim is to continue to gain opportunities at Harlequins
Henry - Focusing on Bath and the professional dream

TRU speaks exclusively with fly-half Zack Henry on his move from Bath to Rouen, life abroad and extending his stay in France.

Zack Henry knew his family had concerns when he told them what direction his rugby career would be going in. The Great Britain University 7s starlet took the huge decision to move to France to begin his journey in the rugby world, but now the 22-year old cannot speak highly enough about his first seven months across the channel. “If a young player was thinking about playing abroad, I would definitely recommend it. Getting a new life experience and living elsewhere is always an eye opening thing.”

The fly-half arrived at Federal 1 side Stade Rouennais last summer after finishing his three years at Bath University with a bag of potential which suggested he was capable of making his move abroad work. For a young, English player to take their first step into full-time rugby and choose to play away from home is a life changing decision, but Henry quite rightly has no regrets.

“I am loving my time in France so far,” said the former England Students player. “The experience has been great and I have met some brilliant people alongside enjoying the faster, wider way they play rugby.

“The family were a bit sceptical at first about a rogue move abroad, but once I'd had my initial meeting with Hilly [Coach Richard Hill] and informed them of the pros of the move to France, they were very supportive. The weather has been better than in England and being able to progress in learning the language is also something I love about this experience.”

His move to France occurred during his final year at Bath where he was also in talks with a number of Championship clubs. Henry’s older brother, Jake, is now plying his trade with Rotherham after spells with National One sides Plymouth Albion and Darlington Mowden Park, but for Zack, he was immediately attracted to a move to Normandy.

With most individuals in any profession, it is natural to find the first couple of days tough in a new job or new surroundings. Henry’s move to another country suggests it would have been even harder for him to settle down into this new lifestyle, but that simply hasn’t been the case.

“I was looking to get signed professionally and had a few discussions with some Championship clubs which was the initial aim for me,” he adds. “One of my coaches at Bath put me in contact with Hilly and immediately after that, I knew I wanted to come to Rouen and play in France. It was a no brainer.

“The first couple of weeks was good fun but also hard work. I had just come from the Student World 7s Championships (where Great Britain finished runners up to Australia) so hadn't really had much rest and was straight into a taxing pre-season.

“But the boys were really welcoming and we all got on straight away. There was initially a language barrier with the French boys but you soon pick up the necessary words to chat to them on a day to day basis - we also have French lessons which are handy.

“It definitely helped having an English coach and a few English players/English speaking players to chat too. Now, myself and the other new signings feel comfortable with the language. All the boys live in a residence of flats and houses either with someone, in their own flat or with wives/girlfriends so there's always stuff going on and someone to socialise with.”

Life sounds near perfect for Henry in northern France, but it's not just off the field where he needs to be happy and that is the reality if he wants to keep progressing in the game.

From playing at Hurstpierpoint College in the Daily Mail Cup three years ago (now the NatWest Schools Cup), Henry’s dream has always been to play professional rugby and despite only signing a one year deal in Rouen, he certainly has been in the thick of the action for the Federel 1 outfit.

Rouen currently lie 2nd in Pool 2 of the competition and Henry has been involved with their excellent season so far, but this weekend against Lombez, he makes a welcome return after eight games out injured.

He adds: “The season started really well and I'd like to think I positively impacted the rugby. However, after doing the ligaments in my knee and then in my first game back breaking my jaw and losing three teeth, the rest of the season has been filled with frustration and rehab! This weekend I am finally fit again. I’m looking forward to getting back on the pitch!”

Henry says his future is now being discussed but he is keen to stay in France and stay at Rouen. A new president, new investments and the aim of moving up a tier over the next two years is something the 22-year old is keen to be a part of.

He has represented Great Britain and England, but he knows club rugby has to be at the top of his agenda at this stage of his career. “I'm currently just focused on enjoying my rugby and living in another country. I think the pathway to international rugby from the championship is difficult and I am enjoying learning a new language, playing a more enjoyable style of rugby and living this lifestyle.”

“I am definitely motivated to reach the top and whether that is in France or England or elsewhere, but I think for now, it's best for me to see what Stade Rouennais can achieve and focus on winning the league this year.” Whatever step Henry takes next, he seems set for a promising career whether that be in the warm climate of France or the wind and rain of England.