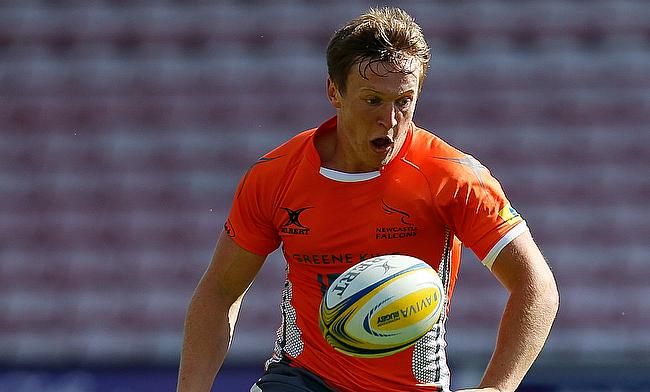 Simmonds shaping own future at Exeter
Being with England was pretty crazy, but my short term aim is to continue to gain opportunities at Harlequins
Mat Protheroe: “It has been a quick transition, but I know I have a long way to go.”
Future Wasps aiming to shine at all levels
Zach Kibirige: Growing at Newcastle

20-year-old Brett Connon spoke to Talking Rugby about moving to his hometown club, his experiences with the Falcons and representing Ireland.

It’s Friday, October 14th 2016 in Swansea. It’s a European weekend.  As usual, the teams are announced a couple of days in advance and for one player, it is a dream come true. He has waited patiently for this opportunity to arise and now the time has come.

It is a debut for a young player for his hometown club Newcastle Falcons. “To be put in from the start against Ospreys was a great experience for me and one I will never forget.”

Brett Connon starts at full-back at the Liberty Stadium in front of just over 7,000 spectators, but even before a ball is kicked, the occasion is already special for the 20-year-old.

He lines-up by the posts and knows full well who he is up against. The half-back partnership of Welsh internationals Dan Biggar and Rhys Webb is enough for Connon to realise that this is a ground-breaking moment in his career. Added to that, the likes of Scott Baldwin, Alun Wyn-Jones, Dan Lydiate and Justin Tipuric are also his opposition for the evening.

Rewind 12 months prior to that night in Swansea and Connon would no doubt have been watching the aforementioned stars beat England at Twickenham in the Rugby World Cup. Today, the versatile back is now very much involved with the Newcastle Falcons first team after years of viewing some of the best in the game on his television while also taking part in rugby festivals and travelling to Kingston Park to support his local club.

“It was always a dream of mine to play for the club I supported,” he says. “It’s just been brilliant.”

But as any young player knows, it is never an easy journey to make it to where you want to be. You have to be dedicated, work hard and take every opportunity as it comes.

Connon’s story begins in Carlisle. “I first started at Carlisle Rugby Club and that was a natural move for me,” Connon says. “My brothers [Grant and Max] played before me and I followed the same path when I was about five or six years old.

“Because I watched them when I was young, I automatically tried rugby and it seemed  to be the natural step. I still had to work hard to be where I am now especially when I was at Austin Frairs School because you had to impress to establish a link with county rugby which I was able to do.”

The journey from Connon's school days has been a rapid one.

“Playing county allowed me to be recognised by Newcastle which I wasn’t expecting”, he says. “Still at school, I played at U15 and U16 level through development festivals. I then played at U18 level for Austin Friars but I was also playing A-League rugby for Newcastle and that was a great learning curve. After the academy league, I was then lucky enough to be offered a contract in 2015 by Dean [Richards] and Mark [Laycock] and I was brought into the senior academy and I have gone on from there.

“I guess when I was younger playing in the Land Rover festivals and then watching the game after, I got a feel for the club and it makes you feel part of the set-up in a weird way! When I was asked to join the academy as a 15 year-old, I felt more and more part of the club and it made me really want to push on and be involved week in, week out for Newcastle.

“It’s been brilliant since signing my pro contract in 2015. With it being my home club from living over in Carlisle, I always watched Newcastle as a youngster and to move over here and live with a few of the other lads I have played alongside during the academy and through training in the past is really good and I am really enjoying it at the moment.”

For all his hard work, Connon is now seemingly reaping the rewards at Newcastle. His debut against Ospreys last year was swiftly followed by his first Aviva Premiership appearance against Northampton. “I came off the bench in that game,” he says. “The senior players really made me feel comfortable and it helped my game.”

Newcastle Director of Rugby Dean Richards seems to be bedding in Connon slowly with a couple appearances since then – both in Europe – against Grenoble and Lyon, but it is not just for his parent club where he has impressed. For his dual-registered side Blaydon and for his country Ireland, he has made a name for himself.

Connon’s involvement with Ireland came from the IRFU’s Exiles system and his older brother Grant had represented the country at U18 level. Connon followed in his footsteps once again before stepping up to U20.

This time last year, Connon had just completed 14 minutes for Ireland against France U20s in the Six Nations, but the best was still to come for the native Englishman who qualified for Ireland through his father.

“It was unbelievable to represent Ireland," Connon says. I took the same path as my brother, but to be a part of the squad was amazing.” Connon went on to play just under an hour against England at his home from home; Kingston Park before starting both the remaining fixtures against Italy and Scotland where he contributed 20 points.

His performances earned him a recall to the squad for the U20 World Championships in Manchester last summer where Ireland stunned the competition and Connon featured heavily. “We did well in the last Six Nations and built from there,” he adds. “I don’t think many thought we could do what we did in Manchester and reach the final. For me, being part of that squad for Ireland and to get to the final against England was massive and such an honour.”

For now, Connon’s Ireland days are over since he turned 20 in August of last year, but that doesn’t mean to say his performance levels have dropped. When Newcastle do not require his services, Connon regularly plays for National One side Blaydon; a club he has been involved with for the last 18 months.

“The physicality in National One is up there with what you see in the A-League and I enjoy playing for Blaydon,” Connon says. “Many players in the Premiership go into that level to play like Tom Penny and Chris Harris and it shows that playing in National One helps you improve as a player and helps you move up.”

And ‘move up’ is exactly what Blaydon are doing as things stand. The north-east club are just above the relegation zone after three wins from four and Connon is hoping to help guide them to safety once again. His other short-term goal is to try and help Newcastle improve and move up the Premiership table, but like earlier in his short career, this emerging talent knows he must continue to work hard in order to establish himself further at Kingston Park.

“I am just hoping to push on with the first team and get into the squad each week. That is the main goal as it stands as I just want to help the team improve. It would be great to feature more in the Premiership for the club because we do have the quality to succeed, but for now it is about getting my head down and working hard.”