Simmonds shaping own future at Exeter 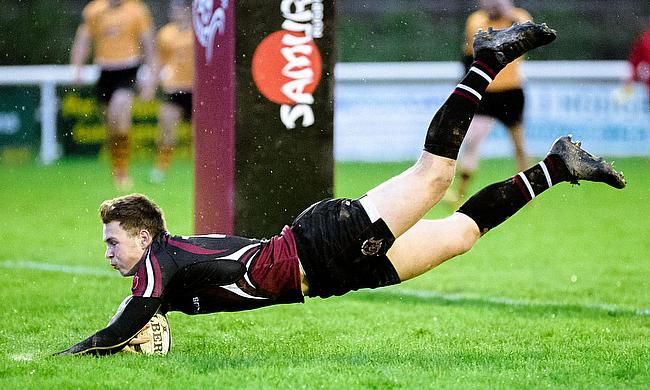 Being with England was pretty crazy, but my short term aim is to continue to gain opportunities at Harlequins
Mat Protheroe: “It has been a quick transition, but I know I have a long way to go.”
Future Wasps aiming to shine at all levels

Having followed his father, uncle and older brother into rugby, Exeter Chiefs’ rising star is now making his own impact in the game.

Joe Simmonds can identify the moment he became the next member of his family to play rugby at a high level. “I came straight to Exeter from school and my older brother, Sam, was of course already at the club so I was fortunate enough to do a bit of training with them,” says Joe. “It was great to be training with him, but I knew I had to work hard if I was to ever play alongside him.”

The Chiefs fly-half, who played a starring role in their recent Anglo-Welsh Cup win over Wasps, keeps referring back to that moment he first went to train with Exeter in 2015 as ‘lucky’.  His father Dave and his uncle Rob both played for Teignmouth and Devon, but even though he comes from a rich rugby dynasty, Simmonds quite clearly has his own talents and luck has not played any part in his progress at Sandy Park so far.

Simmonds does admit  that part of his excellent development at Exeter this season is due to the positive influence his family has had on him, but he is very much his own player, on his own journey. Whereas brother Sam is a huge and key presence in the back-row, Joe is a versatile back with great vision and a superb reader of the game which shows intelligence beyond his years.

“Having a dad and uncle who also played rugby was a big inspiration for me. Seeing my older brother sign at Exeter two years before me also pushed me to work harder,’ explains Joe. I do think Sam playing for Exeter helped me. It is great that we are now at the same club and playing Sevens with him at the start of the season was really good too.”

Brothers do have a strong bond and it is clear that Sam’s previous experiences in rugby helped Joe make a decision in where he wanted his career to go next. Like his older brother, 20 year-old Joe joined Ivybridge College and despite two tough years playing in the AASE Leagues for the Devonshire side, Joe did enough to catch the eye of Exeter’s academy coaches.

He put pen to paper in the summer of 2015 and life at Sandy Park could not have got off to a better start for him. A ‘dream debut’ is how he described his man of the match performance in Exeter’s 59-14 pre-season victory over Bath where Simmonds scored 100 per cent of his kicks in his first senior start.

“I didn’t expect to start that pre-season game last season, but when I was given the opportunity, I knew I had to take,” says Joe. It was the best possible start for me, but the only downside to that was I didn’t really push on from that performance.”

In no way was that Simmonds’ fault though. The high intensity training during that summer led to him picking up injuries which meant he missed out on some academy games for the Chiefs and the beginning of his loan spell with National Two South side Taunton Titans.  However, that setback now seems like a distant memory for Simmonds, who over the past year, has achieved a great deal not only with Exeter, but with England too.

“I was with Taunton in National Two South and it was the perfect platform for me to get some game time which I was tying into some A-League games for Exeter,” he recalls. “ From that, I got a call to play for the England U20s in 2016 at the Six Nations which was weird really! I always wondered how people get into the England U20 set-up!

“Playing for Exeter in A-League games last year was great, but that next step-up was England. To represent your country and sing the National Anthem is just an honour and it really highlights exactly what you are playing for and once again, it is another bit of experience which I can use to help me improve as a player.”

At 19, this was just the beginning of a breakthrough year for Joe who continued plying his trade in fourth-tier of English rugby whilst trying to impress in the academy at Exeter. This season, Simmonds is dual-contracted to National One side Plymouth Albion, but over the last couple of months, his career at Exeter has taken another step forward.

“I have played quite a few games at Plymouth. I am originally a 10, but I have been playing centre down there and it has just strengthened my game. Plymouth have done well this season and National One is a great standard too. Getting that game time has been key as I have been able to be ready for Exeter whenever they have needed me.”

And the Chiefs have called upon the services of Simmonds this term. He has been named amongst the replacements a number of times this season which would have been a great confidence booster for him, but to make his debut for Exeter and then appear in the Premiership and in Europe for the club, was yet another dream come true for Simmonds.

“It is strange,” Joe adds. You watch rugby at a young age and you see it on the television and say to yourself: ‘How far away is the Premiership?’ It is all about the hard work and with that, you get the opportunities which you then have to take. In November, I got the chance to come on against Harlequins quite early because Will Hooley unfortunately got a bad knock but I was able to keep calm, fit into the game quite comfortably and take my chance.

“My start against Cardiff in the Anglo-Welsh Cup was great too. It is all about taking each game as it comes and even though I have gained good milestones, I am not going to get ahead of myself because there is still a long way to go.”

One of Simmonds’ highlights at the end of 2016 was his performance against Worcester where the young fly-half replaced club legend Gareth Steenson to kick his first points of his senior career. Simmonds is not in bad company at training sessions with the likes of Steenson helping him improve his game while he rubs shoulders with England internationals such as Jack Nowell, and Henry Slade as well as learning from some of the most experienced players in the Premiership like Geoff Parling and Thomas Waldrom.

“Just to have the likes of Gareth and Henry as well as the other top professionals around the club is great,” says Joe. “It’s like they are mentors to me! I am always asking for tips on kicking as well as their view on the games and in training so I can constantly learn off them.

“Just having these characters in the squad helps you ease into the professional environment and helps me with my confidence too.  Every game I play, I am just becoming more assure of myself which is down to my teammates around me.”

It certainly was an assured performance by Simmonds last weekend as six conversions from eight tries helped his side move top of Pool 2 in the Anglo-Welsh Cup after their thumping 52-5 victory over Wasps. The 20 year-old is expected to feature in the final pool match on Saturday away at Bristol as Exeter look to reach the semi-finals, but despite the impressive few months which Simmonds has had, he continues to reiterate the point that he cannot take anything for granted.

“I have had opportunities at Premiership and European level, but as I keep saying, I am just trying to show what I am capable of every time I step out for Exeter and also I look to help the team around me. This season has been good for me, but there is no point looking past the next game. I just have to be consistent and keep playing well.”

Stuart Hogg ends speculation over his future with Exeter Chiefs