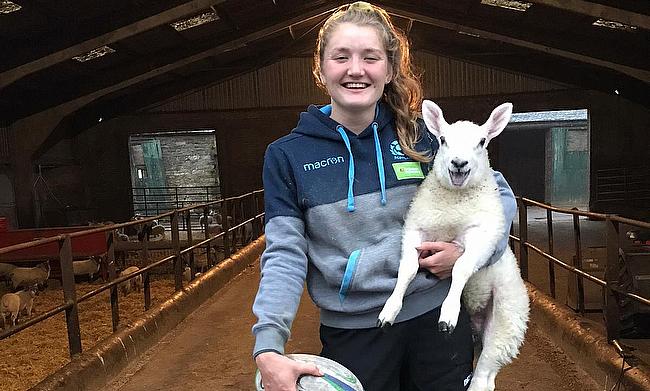 Caity Mattinson on why Worcester Women will be ‘unrecognisable’
‘Playing in a World Cup in New Zealand would be a very special moment’
Mhairi Grieve is ready to jump in and swim with the Sharks
Darren Lamon: 'We see this opportunity as completing the Sharks family'

All rugby players have had to adapt to different ways of training to keep themselves ticking over for when the sport does eventually return - and for one of Shale Sharks’ newest recruits Nicola Howat, that has meant workouts on her family farm.

When lockdown in the UK began on March 23, Scotland cap Howat, now 23, travelled back from her base in Edinburgh to the farm between Cupar and St Andrews in Fife.

As well as sticking to her circuits and other fitness work along with her three sisters, she has been kept busy by helping her father, Bob, out on the farm.

“Every Easter since I was at school I have helped with lambing [when the ewes give birth to the baby lambs] and this year was no different,” second-row Howat told TRU.

“Like everyone, I was frustrated to see the 2019/20 rugby season cut short, but there are much bigger things than sport going on at the minute and it has been really nice being back at home, helping Dad out with some work, trying to keep fit and refocusing ahead of my next challenge.”

And that next challenge is twofold.

Big thumbs up to lambing being over for another year (and to turning off that 5.15 alarm ????)

This summer, she will graduate from Edinburgh University after five years studying to be a vet and she hopes to enter the profession for ‘real’ in the coming months.

At the same time, she will be relocating to Manchester to be a part of the first ever Sale Sharks women’s squad who are aiming to make their mark in the English top flight whenever the 2020/21 season does get underway.

The Sharks head of women’s rugby, Darren Lamon, has been on a big recruitment drive in recent weeks and it has included the arrival of three Scotland internationals in the shape of scrum-half Mhairi Grieve, Howat and back-row Lucy Winter.

“With university coming to an end I was keen to look for my next rugby challenge ahead of next season and it was great when Sale Sharks got in touch and were interested in talking to me about moving south,” Howat explains.

I’m looking forward to challenging myself in the Premier 15s competition and thrilled to get to do it with an ambitious team like the Sharks. It will be something out of my comfort zone, but I am ready to give it my all.

“I am at the stage - and age - in my rugby career when I need to keep pushing on and learning and I think one of the things that really attracted me to Sale was the fact that we are all coming into this fresh and we can really build our culture and values together from day one once it is safe for training to resume.”

Howat’s rugby journey began at Bell Baxter High School in Cupar when she was in her early teens.

The school is famous for helping bring through the likes of current Scotland men’s squad players Pete and George Horne, but around a decade ago, rugby was also made available to girls there and Howat got involved.

“I joined the rugby section in S3 [Year 10]. We trained a lot and we maybe only played a couple of matches, but it gave us a feeling for the sport and from there a couple of years later we were able to head along to local club Howe of Fife where they were starting rugby/keep fit sessions for women,” she explains.

“It was mainly mums of boys from our school, but a group of us younger players also joined in and it meant that, a while later, the Howe senior women’s team was up and running.

“I had tried other sports like athletics, horse riding and swimming growing up, but there was something about rugby that just grabbed my attention. I love team sports and all the positions are so varied that there is a job for everyone on the pitch while all the clubs I have been a part of - and seen other friends join - have been so welcoming to everybody.”

Howat played for Howe of Fife’s senior team when she was still at school as they were coming up through the ranks from the National Development League and she continued to play for them after she moved to Edinburgh for university for a couple of years as they established themselves.

“I loved playing for the club and I was also really happy with the way the Edinburgh University squad welcomed me into the group when I joined them in my first year studying,” the player who was starting to gain Scotland age-grade recognition at the time, recounts.

“As a youngster I had started as a back, but by that time I was starting to focus on second-row as my main position and I was learning all of the time.

“With Scotland under-20s, we played away in Belgium against their full national team and that really opened my eyes to the level I had to reach and from there I just continued to work hard and had some great times at Edinburgh University.

“As well as all the great friends I made there, one of the most memorable moments on the pitch was when we won the BUCS Championship trophy at Twickenham three years ago.”

“I definitely want to put my hand up for Scotland selection again, once you have had a taste of it you want more”

Howat’s good form for Edinburgh University around the time of that trip to the home of English rugby in 2017 saw her named in the wider Scotland set-up by then head coach Shade Munro.

“Going into that environment was another big step up for me, but I knew a lot of the girls already and I just tried to learn as much as I could from them in training, especially the ones who were in the second-row mix [like Emma Wassell, Deborah McCormack and Sarah Bonar],” added Howat, who has seven full caps under her belt.

NEW SIGNING | 2?? more Sharks in the tank... ??@SaleSharksWomen secure the services of Scotland international's Nicola Howat and Lucy Winter ahead of the upcoming Premier15's Season!

“I made my debut off the bench at Scotstoun against France during the Six Nations of 2018 and my family and friends were there so that was a great moment.

“Every time you play for Scotland is an honour and although I was disappointed not to play any matches in the season just gone, I am just 23 and feel the move to Sale will take my game on, so I definitely want to put my hand up for Scotland selection again going forward.

“Once you have had a taste of it you want more and there could be a lot of international games to come in 2020/21.”