Yarde and Sale on an upward curve as Sharks target silverware 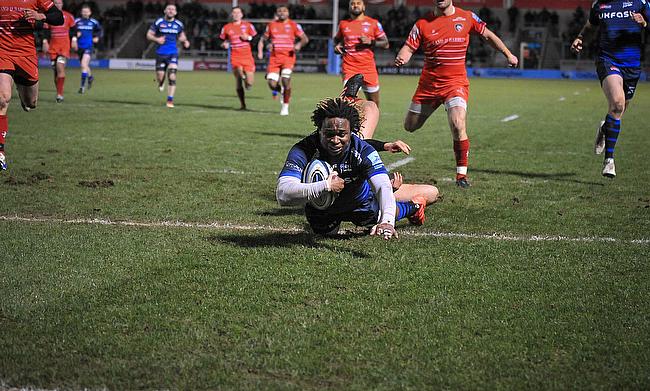 During this interview with Marland Yarde, there will come a point where we discuss how significant Sale Sharks’ first trophy for 14 years could be in terms of the club’s growing ambitions.

But for now, we focus on Yarde himself. The winger is currently experiencing a purple patch of form and he has certainly played his part in Sale’s excellent recent run of results thanks to a flurry of tries.

The 27-year-old admits it is ‘hard to reflect’ on excellent indivdual performances against Leicester Tigers and Gloucester, but not focusing on the past is a subject Yarde has become accustomed to.

It is clear Yarde is beginning to flourish in Manchester, but whilst four tries in his last three appearances could explain why he is thriving, anyone who is aware of what the winger has been through will know that isn’t the full story.

October 2018 was supposed to be the start of Yarde’s next chapter following his move from Harlequins to the AJ Bell Stadium but in fact, it quickly became one of the winger’s biggest setbacks in his career.

With Sale's Gallagher Premiership encounter against Newcastle Faclons drawing to a close, Yarde ruptured his MCL and ACL ligaments and dislocated his knee whilst making a tackle. The impact was such that it ended his season before it ever got going. To add insult to his setback, any hopes of a place in England’s 2019 Rugby World Cup plans were also dashed.

However just under 12 months later, Yarde bounced back to return to action and now the winger is only focused on looking ahead.

It [his form] has been brilliant,” says Yarde. “I always felt like I was going to come good at some stage, but now it is about staying consistent, staying committed and believe in what I am doing because it is starting to pay off really well.

“I have been doing a load more stuff behind the scenes which people obviously don’t see. You of course train here [at Carrington] but I have also just taken my recovery really diligently and worked really hard off the field.

“I knew I could feel it. I felt like the penny sort of dropped on my body at the start of the year because I did feel really good and sharp so to me, it wasn’t really a surprise, but obviously off the back of the severity of the injury, watching me get back to that level might have been a surprise to people."

Yarde has now become a mainstay in Sale’s starting XV for Steve Diamond, having played 80 minutes in five of his last six matches for the club.

Diamond was also delighted with the winger’s hat-trick against Leicester Tigers last month, but with the wealth of talent Sale have in the wing department, Yarde was quick to dispel any notion that he has secured a permanent place in the side.

“I don’t think anyone can say they have completely nailed down a position,” Yarde says. “We have got some great strength in depth here, but all I can do is perform well on the weekend.

Yarde’s excellent displays have gone hand in hand with Sale’s excellent recent run. Diamond’s side have won five of their last six games, including impressive away wins at Gallagher Premiership leaders Exeter Chiefs as well as Gloucester.

The Sharks finished last season in seventh place with their results on the road a stark contrast to their performances at the AJ Bell. Sale won 11 league games last year, but only two of those triumphs came on their travels.

However, it seems as though Sale have cracked the code this term and their recent consistency has lifted them to second in the table.

“We need to have that fear factor in us as a team to make sure we get the best out of each other each week,” says Yarde. “We don’t want to be a win one, lose one team. Any great teams have to have the ability to win home and away.

“I think our home form has always been pretty good, but away from home, we have slacked off on quite a few occasions but I think in this season, what has been different to before is that we have actually managed to go away and win some games.

“Exeter away and Gloucester away are games which we may have lost last year so I think it shows the belief that we have in the squad depth that we are able to do that, but we still have a long way to go. I think we are just over halfway in the season so we don’t want to be taking our foot off the gas because we know there is still work to be done.”

The next assignment for Sale this season is the Premiership Cup Final and it sees the Sharks come up against Yarde’s former club; Harlequins.

Yarde admitted Sunday afternoon’s clash will be just ‘another game’ for him on a personal note, but for Sale themselves, this could be a springboard for success.

The North-West outfit haven’t lifted silverware since clinching the Premiership title in 2006 and considering the campaign Sale are experiencing, Yarde believes it could be a vital catalyst for the club.

“The other competition we are involved in is the Premiership and we want to be in the top four and fighting for a semi-final place in June. That is our aim and our goal so I am sure tasting that victory would really spice up our appetite even more to go all the way. We are not thinking too far ahead at that at this stage because it is important that we focus on the next game which is the final and that is the mentality we have at the moment.”