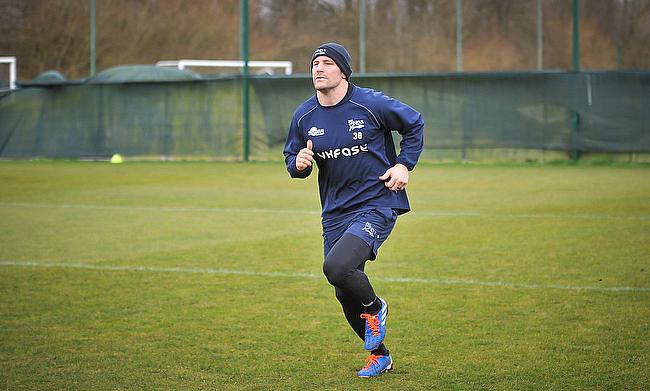 Josh Beaumont Column: You start to understand how much you miss playing the game
It only felt like yesterday that we were playing at Heywood Road – Tom Curry
Faf de Klerk was a star of the great South African show and now it’s time to shine for Sale
Jake Cooper-Woolley: Going to university was ‘very beneficial’ for my rugby career

When Newcastle Falcons were relegated at the end of a highly competitive Premiership season, there were question marks surrounding the club’s highest profile player.

Mark Wilson had become an established England player in the 2018 Autumn Internationals and in the summer, he faced a difficult decision.

Newcastle was where Wilson had spent the entirety of his professional career, with spells at Kendal and Blaydon to aid the backrow’s development. Having notched up 224 appearances for Newcastle in the Championship, Premiership, Challenge Cup and Champions Cup, it was up to the then 29-year-old to decide what would be best for his future.

After several months of deliberation, Wilson made the decision to make a loan move to Sale Sharks for the 2019/20 season, before returning to Newcastle at the end of the campaign. This was clearly to maintain a place in Eddie Jones’ mind but so far, Wilson’s involvement at the AJ Bell has been hampered by rehab after knee surgery last November.

Despite being a Newcastle mainstay for nearly a decade, Wilson actually hails from Kendal in Cumbria, a far cry closer to Manchester than England’s northern-most city. As a result, Wilson does know exactly what representing this club means.

Not sure Steve Diamond has got enough quality at his disposal to get a decent back row out for @SaleSharksRugby next year?! ??(Tom Curry, Ben Curry, Jono Ross, Mark Wilson, Dan Du Preez, Jean-Luc Du Preez, Josh Strauss, Josh Beaumont, Cameron Nield)

“My family is from the North-West and I understand what it means to guys, the more local guys like your Will Cliff’s, your Cam Neild’s, who are from around the region.” Wilson said.

“I knew quite a lot of the lads from quite a way back. Guys like Will Cliff and Josh Beaumont, so when I actually turned up, I realised I knew a lot more of the lads than I thought I did.”

Wilson joins Sale at an extremely exciting time for the club. For so long, Steve Diamond’s side operated vastly below the salary cap before making some huge signings in preparation for this season.

“When I turned up a couple of months ago, I could sense a brood of excitement, because I think with what has happened with Saracens, that has opened up a slot in the top four,” Wilson. “There is absolutely no reason we cannot go and achieve that.

“There is an exciting bunch of players, guys that are playing really, really well, that have come in this year or over the last twelve months for Sale. It is really exciting for the next, kind of, four, five months have got in store.”

First called up for England for their summer tour to Argentina in 2017, Wilson proved himself as an extremely flexible and hardworking player. It wasn’t until the Autumn of the following year that the Newcastle forward became a consistent starter for Eddie Jones as well as a fan favourite.

Winning the Player of the Series Award, after playing every minute across the backrow, Wilson then proceeded to secure his place on the plane to Japan with outstanding personal performances whilst his beloved Newcastle crumbled around him.

“I suppose you can try and relate them experiences as you go on and hopefully with the younger guys in the squad, you can maybe help them with the experiences that they might be having. Dealing with big pressure games, with the big expectations, the nerves, hopefully these things will hold me in good stead.”

Wilson is well accustomed to several of his new surroundings Tom Curry was one of Wilson’s England teammates as the pair helped guide their country to the World Final in Yokohama. This season at Sale will be Wilson’s first opportunity to play alongside the likes of Jono Ross, who he has sternly faced off with before, as well as adding something to the team.

“You want to try and add something, hopefully,” Wilson said. “They’ve got some great backrows here, so yeah, I just want to try and add to the team in the way that I have played at Newcastle, but also looking forward to playing alongside good players. Both sets of twins and guys like Jono Ross, who I have been competing with a long time in the Premiership.”