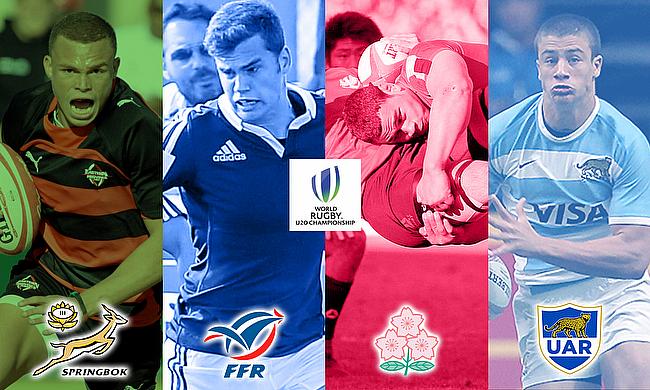 We wrap up our recent previews of the World Rugby U20 Championship by examining Pool C, after looking at both Pools A and B over the last few days.

In Pool C we have former tournament winners South Africa and an improving France, as well as Argentina and Japan.

We kick things off with top seeds South Africa.

The Junior Springboks made it all the way to the semi-final last season, ultimately beating France in the 3rd/4th playoff, but by the lofty expectations of South Africa, that has to be considered a disappointing campaign. The team was direct and blunt and whilst that proved to be enough to overcome most opposition, it was thwarted by England in the semi-finals.

Coming into the 2016 event, South Africa have a squad that looks capable of playing in a more balanced fashion, despite arguably lacking the danger men out wide that have previously stood out in South African U20 sides. Jeremy Ward, who captains the Junior Boks and will start in the South African midfield, is not solely a ball-up-the-jumper centre who takes the ball and runs and he can contribute to a wider and more intricate attacking style. There is also a good battle at scrum-half between James Hall and Marco Jansen van Vuren, with both capable of delivering quick ball for the back line to work with.

Up front it’s what would you expect of any South African side, age-grade or senior, with a powerful tight five that will be more than a match for almost all opposition at the tournament. Having been drawn alongside France, who have a fairly sizeable tight five themselves, and the technically-refined Argentinean pack, the forward and set-piece battles in Pool C should be fascinating. At number eight, Junior Pokomela is a star-in-waiting and shares a number of positive attributes with other mobile South African eights, such as Pierre Spies and Warren Whiteley.

This versatile full-back/fly-half was the star of South Africa’s annual Craven Week last year and even at the tender age of 18, already has a fantastic skill set, thanks in large to the time he has spent at both positions. It’s an approach to fly-halves and full-backs that New Zealand has and one that England has also been adopting at age-grade level, and it tends to produce very good players. Bosch can bring his counter-attacking, footwork and kicking to either position during the U20 Championship, but using him as a full-back coming into the line and acting as a secondary playmaker could have devastating effects on South Africa’s opposition.

1st in Pool C. France will test South Africa this year, more so than they did in the 3rd/4th playoff game last year, but the Junior Boks should still see off the challenge.

Building from the front up – like any French team worth their salt – France have a pair of good scrummaging props in Clement Castets and Michaël Simutoga, as well as ballast in the second row in the forms of Florian Verhague and Mathieu Tanguy. Castets was the pick of the looseheads in this year’s Six Nations and should spearhead France at the set-piece, whilst flanker Anthony Jelonch will be a match for the physical back rowers of South Africa and Argentina.

At scrum-half, Antoine Dupont has Top 14 and European experience with Castres and should provide plenty of direction and leadership from half-back. Elliot Roudil and Atila Septar are both dangerous in the back line but it is Gabriel N’Gandebe who opposition defences will really have to take note of, with the RC Massy winger capable of ghosting through the smallest of gaps and then turning on the afterburners and leaving defenders for dead.

For quite some time now, the French senior team has been losing its stereotypical Gallic flair but Penaud could be the man to bring it back and then some over the coming years. He’s not particularly physically impressive, although he does have a noteworthy turn of pace, but it’s in his technical understanding of the position where he really excels. He runs exquisite and experienced lines which bely his young age and his handling and distribution are as good as any midfielder’s in the tournament. Penaud is a dagger, not a sledgehammer, and one of the sharpest U20 rugby has seen in several years.

2nd in Pool C. France have a shot at upsetting South Africa, but even if they can’t, a losing bonus point against the Baby Boks would do wonders for France’s hopes of making the semi-finals again this year. They should not have too much trouble putting away Argentina and Japan.

Argentina have not been too dissimilar to France at the U20 Championship, often tending to underperform on the biggest age-grade stage. Though France have begun to change that, Argentina are still a way away from being a genuine contender for the trophy.

The side has proven to be an excellent pathway for the senior team, however, with a number of players from recent years graduating from the side and representing Los Pumas extremely well at last year’s Rugby World Cup. With a number of 18-year-olds and U20 debutants included this year, it’s unlikely Argentina are going to finally make a run on the title, but there are still plenty of players to keep an eye on.

Scrum-half Patricio Baronio returns for his second U20 Championship after proving to be quite the livewire at last year’s tournament, as does lock Ignacio Calas, who will provide the fairly lightweight Argentinean tight five with some much-needed ballast. Spearheading that mobile Argentine pack will be hooker Gaspar Baldunciel, who is the epitome of the set-piece efficiency that Los Pumas have come to stand for.

Delguy made his debut on the HSBC World Sevens Series circuit this year, appearing for Argentina at the Vancouver leg of the series. A slight full-back who is also comfortable on the wing, Delguy certainly looks like another in the mould of Santiago Cordero. His footwork and speed in sevens were noticeable and should stand him in good stead for the challenges that await him at the U20 Championship. He was also a member of the Argentina side that won silver at the Youth Olympics in 2014.

3rd in Pool C. Argentina are still a way off South Africa at this level and France looked formidable during the Six Nations, making it difficult for Argentina to progress beyond 3rd. They won their duel with Japan at last year’s tournament and will need to do so again, lest they face the prospect of relegation.

It was quite the effort from Japan last year to avoid relegation but it will prove to be an even harder task this year.

With U20 Championship new boys Georgia safe from relegation due to their hosting of the tournament next season, it leaves Japan in a likely dogfight with Italy to avoid demotion to the World Rugby U20 Trophy. A win over Argentina in the pool stage could see them move out of the relegation conversation but with their standout player from last year, Kosuke Horikoshi, no longer available, it will put a lot of pressure on a young and inexperienced squad.

Most of the side that played last year, including Horikoshi, had been a part of the group that had won promotion from the U20 Trophy in 2014 and there was plenty of consistency and chemistry in the squad. With that gone, it will be interesting to see how Japan fare at the set-piece, one of their more impressive facets last year, especially with hooker Horikoshi having provided much of that positive impact.

While many of Japan’s players have progressed on from U20 rugby and are now solely representing their universities, Tatafu is one very important remnant from their 2015 campaign. The dynamic number eight was Japan’s most reliable source of front-foot ball last year and will undoubtedly fulfil the same role this year. Should Japan find themselves in a relegation-decider, Tongan-born Tatafu could be the difference maker for Ryuji Nakatake’s side.

4th in Pool C. Heavy defeats almost certainly await at the hands of South Africa and France and it would not be the worst idea for Japan to keep some of their powder dry for their game against Argentina and then the playoff stage that follows.