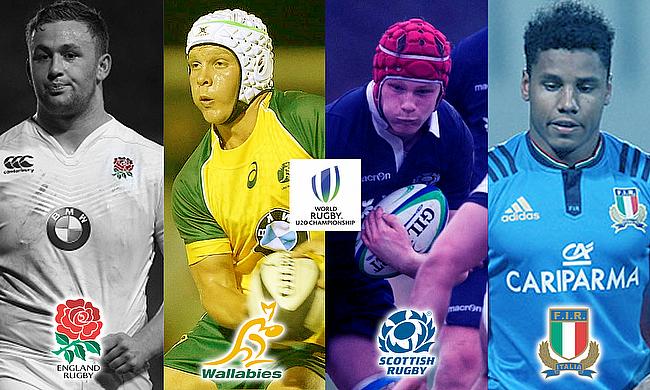 Following on from our look at Pool A of the upcoming World Rugby U20 Championship yesterday, we now turn our attentions to the tournament’s humdinger of a group, Pool B.

The pool consists of hosts England, a much-improved Australia, an experienced Scotland and the relegation-wary Italy.

We start with the top seed and host, England.

It’s been a miserable season for England, who finished fifth in the U20 Six Nations, their worst ever campaign at this level and only managed a solitary victory against Italy. With a host of players missing due to club commitments and/or injuries, it’s unsurprising that England struggled, but the levels to which they fell caught everyone off guard.

Now, under the direction of new head coach Martin Haag, England go into their own tournament as dark horses, rather than as one of the tournament favourites. Aviva Premiership standouts Harry Mallinder and Johnny Williams have both been added to the squad after being unavailable during the Six Nations, as have Theo Brophy Clews and Will Evans, two more players who have made an impact at senior club level this season.

Hooker Jack Walker returns for his third U20 Championship after injury curtailed his Six Nations and U18 standout scrum-half Harry Randall has been fast-tracked into the squad after injury decimated England’s options at the position during the Six Nations. With an efficient set-piece already in place, the addition of Evans at the breakdown, a perennial issue for England, and the likes of Mallinder and Williams bolstering the back line, England are in the mix to go all the way again this year, despite a horrific Six Nations.

Player to watch – Will Stuart

The talents of Mallinder, Williams and Evans have been clear for all to see this season at senior level but it’s Stuart, a behemoth at tighthead, who was the England player to leave the Six Nations with the most credit. No loosehead in the Six Nations could deal with the Wasps prop and he will fancy his chances of turning the screw once more against Scotland and Italy, as well as against an improved Australian set-piece.

1st in Pool B. Pool B is without doubt the hardest group to call this year, with England, Australia and Scotland all capable of winning it. For all their travails in Six Nations, this is a very different England squad to the one that was defensively shut down by Scotland and they now have senior players included, particularly Mallinder and Williams, who could look like men amongst boys in the U20 Championship.

The junior Wallabies are perennial underachievers at this event. A trip to the final in 2010 remains their highlight but even then they were thumped 62-17 by a New Zealand side who were toying with them for 80 minutes. However, having just split a two-match series with the Baby Blacks, this Australia side offers a lot more promise than some of their recent offerings.

Like England, Australia have been able to include a number of senior players, including Reds standout Campbell Magnay, as well as James Tuttle, Lukhan Tui and Sione Tuipulotu, all of whom have been with Super Rugby squads this season. Given that Magnay has been hurting Super Rugby defences with his array of running lines and powerful frame, both England and Scotland will need to do their best to shut him down if they are to stop Australia.

The pack is certainly an improved area for the Australia U20s but it will still have a tough time dealing with the tightheads of England and Scotland and it’s in the back line where Australia will look for advantages. Tuttle will provide urgency and accurate distribution from scrum-half and a centre pairing of Tuipulotu and Magnay is more than capable of opening up defences, especially with an ambitious full-back like Jack Maddocks joining the line.

Just like you would expect from someone who sounds like an American private eye from the 30’s, Mason is as fast-minded on the pitch as he is fast-footed. The fly-half has an intuitive understanding of the game and plays with calmness and ambition in equal measure. His last-minute kick against New Zealand last month secured a historic victory for Australia and he looks to be a player who thrives under pressure.

3rd in Pool B. This could just as easily be 1st and that’s a measure of how tight this pool should be. This position is predicated on both England and Scotland beating Australia, and they both have the squads capable of doing so. Australia’s performance in the set-piece will dictate those matches as much as anything and as stands, they look short of both their northern hemisphere rivals in that area.

Head coach John Dalziel has built one hell of a dark horse this year. This Scotland side were excellent against England in the Six Nations, putting in one of the best defensive showings - at any level - of recent years, and though their performances dipped as their players were requisitioned by Edinburgh and Bath, they will have them all back for the U20 Championship.

In addition to keeping the Scotland senior team’s hands off of Jamie Ritchie, Scott Cummings and Blair Kinghorn, Dalziel was also able to grab tighthead prop Zander Fagerson, who made his Scotland debut during the senior Six Nations. Fagerson will help bolster a scrum that looked fairly average during the U20 Six Nations and could well be the most potent weapon Scotland have against Australia.

Cummings and Ritchie bring plenty of experience and leadership to the pack, whilst Kinghorn, Adam Hastings and Robbie Nairn headline an underrated Scottish back line that, although not possessing the same level of senior experience as their Australian and English counterparts, is just as talented. For Cummings, Ritchie and Hastings in particular, this tournament could be the final springboard towards senior Scotland caps.

The Glasgow Warriors flanker dovetailed superbly with Jamie Ritchie in Scotland’s Six Nations opener against England but then once Ritchie was required by Edinburgh, Smith stepped his game up to an even higher level. Pillaging at the breakdown, breaking the gain-line with powerful carries and tackling his heart out for 80 minutes, Smith was one of the standouts of the Six Nations. Assuming he is paired up once more with Ritchie, Scotland have arguably the best pair of flankers in the competition.

2nd in Pool B. Scotland have the belief and ability to beat both England and Australia this year. It’s difficult to see them doing both but with Fagerson back in the mix at tighthead, Australia could be susceptible at the set-piece. Given the tightness of this pool, it’s unlikely to offer up a best runner-up, so even if Scotland did finish second, they may still miss out on the semi-finals.

You have to feel for Italy in this pool, as they are on a hiding to nothing.

Having lost all five of their Six Nations games comprehensively, they will struggle to deal with England and Scotland sides that have only added to and improved their squads since the Six Nations and an Australian side that is just as formidable as the two British teams.

A fourth-place finish in Pool B is all but certain for the Azzurri and that means they will end up in the relegation bracket of the playoffs. With Georgia safe from relegation thanks to the fact they are hosting the tournament next year, Italy and Japan both sit in pole position to make the drop to the World Rugby U20 Trophy in 2017. Japan are swiftly improving and a playoff between these two nations would be just as compelling as any of the matches at the top of the competition, albeit for very different reasons.

It’s going to be a tough job for these two half-backs, who will likely have to deal with inconsistent set-pieces, back-foot ball and a back line which is made to look very ordinary by the quality of opposition they are facing. If Trussardi can salvage reasonably quick ball at the base of the scrum and rucks and Mantelli can test the gain-line and draw defenders as the first receiver, then Italy will at least give themselves a punchers’ chance.

4th in Pool B. This is a no-brainer given the competition that exists for Italy in the group. Their focus will be on the post-pool stage playoffs when they will contend with the likes of Japan and Georgia in a bid to avoid relegation to the U20 Trophy.