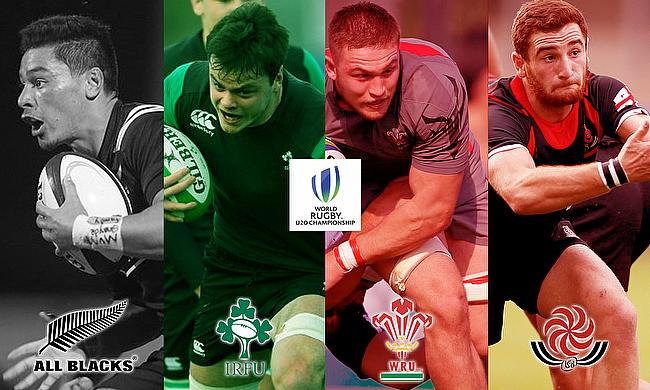 The ninth edition of the World Rugby U20 Championship kicks off in Manchester this weekend and marks the first time that two-time winners England have hosted the event.

Over the next few days we will comprehensively preview each team in the tournament and we start with Pool A, a group that consists of reigning champions New Zealand and U20 Six Nations Grand Slam winners Wales, as well as Ireland and Georgia.

We start with the team that has so often set the benchmark at U20 level, the Baby Blacks.

The Kiwis won their fifth title last year when they beat England, 21-16, in a tight final in Cremona, Italy. Only two players return this year from that squad, but New Zealand will be able to lean on the experience of flanker Mitchell Jacobson, who will take part in his third U20 World Championship. Relative levels of experience also come from hooker Leni Apisai, scrum-half Sam Nock and backs Shaun Stevenson and Jordan Trainor, all of whom have spent time with Super Rugby teams this season.

The Achilles’ heel of New Zealand sides of recent times (they have won just one of the last four tournaments) has been their set-piece and their lack of accuracy and technique in that area. On paper, at least, that seems to be an area that will be much improved at this year’s Championship. Hooker Apisai is knocking on the door at the Hurricanes and should help New Zealand’s lineout and ability to get a quick strike on the ball at the scrum. First year props often have a learning curve to deal with at U20 level but in Ayden Johnstone and Alex Fidow, the Baby Blacks have two remarkably refined scrummagers, who also contribute significantly in the loose with ball in hand.

With the foundations of a strong set-piece seemingly in place, New Zealand’s talented back line could wreak havoc in Pool A. Jordie Barrett, the younger brother of Beauden, becomes the third Barrett brother to feature at the U20 Championship and is a fine fly-half/inside centre, who will likely conduct the back line from second five-eighth. The aforementioned duo of Stevenson and Trainor, as well as Jonah Lowe, will offer plenty of try-scoring threat further out the back line.

Even with the likes of Trainor and Stevenson in the back line, Tomkinson could well be the most dangerous weapon New Zealand have in their arsenal. The versatile back made his ITM Cup debut last year for Otago and his impressive performances in that competition earned him a place in the Highlanders’ extended pre-season training squad. He will likely line-up next to Barrett at outside centre and, with his midfield partner’s exceptional playmaking skills, should prove a stern test for Wales, Ireland and Georgia defensively.

1st in Pool A. Wales could run New Zealand close in their game but there’s just too much firepower in this Kiwi side for a Wales team bereft of arguably their best player, Owen Watkin.

Ireland head coach Nigel Carolan has his work cut out this year. Irish U20 sides had been gradually improving over the last few years but they were brought back down to earth with a bump in this year’s U20 Six Nations, disappointing in the competition, despite a morale-boosting victory over England.

Destructive loosehead prop Andrew Porter returns for his second U20 Championship and will be key to Ireland’s hopes in this year’s tournament. He looked significantly short of his best during the Six Nations but if he can rediscover the edge that had him turning tightheads inside out last year, then Ireland will have a chance of holding their own against New Zealand and Wales. Conan O’Donnell, Ireland’s preferred tighthead, misses the tournament through injury, heaping further pressure on Porter at the set-piece.

The chemistry in the Irish back line looked off during the Six Nations and as with the props, certain players rediscovering their 2015 form will be key for Ireland. Ulster wing/centre Jacob Stockdale was one of the finds of the tournament in 2015 and needs to be the try-scoring threat that Ireland have lacked so far this year. Outside centre Shane Daly and fly-half Bill Johnston are two others in the Irish back line that certainly don’t lack for ability.

The big Leinster lock is Ireland’s leader at this level. A vocal captain who leads by example, Ryan can look like a man amongst boys at U20 level and has every chance to add his name to the likes of Maro Itoje, Akira Ioane and Sean McMahon, who have all looked a cut above U20 level in recent years. Ryan will be prominent in this year’s tournament, regardless of how the rest of the Ireland team performs around him.

3rd in Pool A. Ireland won’t get past New Zealand, but if they target their game with Wales, there is a chance they could make the semi-finals as a best runner-up. They have the talent to beat their local rivals, even if form so far this season suggests otherwise. That said, it’s difficult to see them finishing anywhere above 3rd as things stand.

Fresh from securing their first ever U20 Six Nations Grand Slam, Wales head into this U20 Championship full of confidence and self-belief. Having had a taste of the final in 2013, Wales will be hell-bent on going one step further and lifting the trophy for the first time in their history.

One very significant blow for the Six Nations champions, however, is the omission of powerful centre Owen Watkin. Watkin was fast-tracked into the squad last year and excelled, displaying physical and technical skills well above most of his rivals at U20 level and continued that into this year, playing a key part in Wales’ Grand Slam. He has been left out of Wales’ U20 and senior squads this summer, with the WRU keen to see him have a full offseason and preseason with the Ospreys. Translation? Warren Gatland is lining him up for a senior cap in the 2016/17 season.

Wales still have their fair share of game-winners, though. Wing Keelan Giles showed how dangerous his speed and footwork can be during the Six Nations and the half-back duo of Reuben Morgan-Williams and Daniel Jones exhibited plenty of chemistry. Wales’ one-two punch at tighthead of Dillon Lewis and Leon Brown may be the best in the tournament.

Akira Ioane lit up the U20 Championship last year with his bulldozing carries from eight for New Zealand and it’s fair to say Keddie had a similar impact to that for Wales during the Six Nations. The Newport Gwent-Dragons forward might not be quite in the same category as Ioane was going into this tournament but he can give Wales a constant source of front-foot ball and they definitely have the half-backs and back line to make the most of that.

2nd in Pool A. Wales will back themselves against New Zealand and they have every reason to, coming off of a Grand Slam, but without Watkin punching holes in the midfield, it feels a bridge too far for this group. If they can secure a bonus point win against Ireland, there’s every chance Wales make it through to the semi-finals as the best runner-up.

It’s a debut tournament for Georgia and one which they should enjoy, safe in the knowledge that their place in the competition is secure due to them hosting it in 2017.

That’s where the good news ends for Georgia unfortunately, as they look to be significantly outmatched by their three pool opponents. That is not to say they are without teeth, however. Back rowers Beka Gorgadze and Otar Giorgadze and prop Giorgi Melikidze are all highly thought of in the academies of the French teams they are contracted to and have all won multiple senior caps for Georgia in their teens. Along with Giorgadze, lock Tornike Zoidze and prop Nika Neparidze make up a three-strong contingent of Clermont Auvergne players in the Georgia squad.

The senior experience tails off amongst the backs, with full-back Irakli Svanidze the sole player with a senior cap, but half-back Vasil Lobzhanidze not only brings 15 senior caps to the mix, he also brings experience of a Rugby World Cup.

The scrum-half became the youngest player to ever play at a Rugby World Cup last year, then aged 18, and now returns to U20 rugby to try and lead his nation to unexpected success. He showed at the RWC that he has all the ability required to mix it with the very best in the world, so stepping back into the U20 arena should be no issue whatsoever for Lobzhanidze. The only shame is that if Lobzhanidze were two and a half months younger, he’d again be eligible to play U20 rugby in 2017, when Georgia gets to host this competition.

4th in Pool A. Georgia will be competitive up front with everyone they play, but New Zealand and Wales have the all-court games to put the Georgians away. Ireland do as well, but the junior Lelos will fancy their chances of giving Ireland a bloody nose up front and seeing where that takes them over the course of 80 minutes.