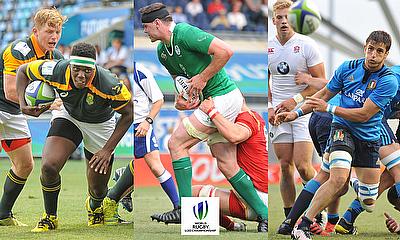 On the opening day of the World Rugby U20 Championship there were thrills, spills and high drama writes Chris Heal as he looks back at the action from first round of games at the Manchester City Academy Stadium.

Three tries in 10 second-half minutes helped South Africa on their way to an opening World Rugby U20 Championship victory over a valiant Japan side.

After Zain Davids had given South Africa an early and well deserved lead, Japan stunned everyone watching at Manchester City’s Academy Stadium by going into half-time with a 19-14 lead thanks to hat-trick from winger Ataata Moeakiola.

But, scores from captain Jeremy Ward and Davids again as well as tries via Mosolwa Mafuma and Carlu Saide took the wind out of the Baby Blossoms’ sails and there was to be no repeat of Japan’s Rugby World Cup heroics when their senior side beat South Africa back in September.

Last year’s semi-finalists South Africa began brightly as they pinned Japan back in their own 22, but some well organised and solid defending by the Blossoms frustrated the Boks early on.

But it wasn’t long until their resilience was broken as the skilful Davids burst past two Japan tackles to touchdown under the posts. Full-back Curwin Bosch added the extras in a game where he would end the match with a 100 per cent kicking record.

Japan then went on the offensive as Moeakiola stunned the Boks’ backline as he announced himself on the world stage with a hat-trick inside 10 minutes.

The winger’s first try saw him snipe his way through a hole in the South Africa defence following a lineout before his second came from an exquisite cross-field kick from fly-half Taisetsu Kanai which Moeakiola caught brilliantly in the corner.

South Africa were also down to 14 men after Japan’s second score as Junior Pokomela was shown a yellow-card for a high tackle in the build up to the Blossoms’ second touchdown.

With that in mind, Japan turned the screw further as Moeakiola used brute strength to power his way past two tackles and dot down from close range to wrap up his hat-trick leaving the Boks shell-shocked.

Japan were then reduced to 14 men themselves when Faulu Maksi was sin-binned and South Africa took advantage as JT Jackson ran on to fly-half Maine Libbok’s clever chip which left them trailing by five points heading into the second half.

With Japan on course to upset the applecart, the Junior Boks had other ideas as they blew Japan away as they scored six unanswered tries in a second period which they dictated.

Three quick-fire tries from Ward (two) and Davids saw South Africa regain control of this encounter shortly after the restart.

Bosch’s kicking was impressing everyone inside the CFA and he nailed a penalty from just inside his own half to stretch the Boks’ lead before winger Mafuma and replacement forward Saide both crossed the whitewash to take South Africa beyond the 50-point mark and secure them an opening day win.

Ireland recovered from a torrid start to stun Wales and begin their U20 World Rugby Championships with a narrow win in Manchester.

Wales, the current Six Nations Grand Slam winners, flew out of the blocks as tries from Shaun Evans, Keelan Giles and Reuben Morgan-Williams gave them a 17-0 lead after just 20 minutes.

But, Ireland sparked into life before the break. A deflected Bill Johnston drop-goal was quickly followed by scores from Adam McBurney and Jacob Stockdale which helped the ‘Boys in Green’ to within two points of Wales heading into the interval.

Johnston and Dan Jones exchanged penalties before the Irish fly-half nudged his side ahead for the first time in the contest after early one-way traffic in the second period.

The gap stayed at a point heading into the final quarter of this gripping contest before Ireland delivered the hammer blow to Wales as the impressive and versatile Stockdale touched down in the left corner to round off a brilliant move by Ireland.

The conversion was wide which still gave Wales a glimmer of hope and that optimism grew when Giles went over for a bonus-try two minutes from the end, but the Young Dragons couldn’t add the conversion to snatch the win.

England began their World Rugby U20 Championship with a convincing 48-10 bonus-point win over Italy.

After a slow start which only saw George Nott go over for the hosts, England went through the gears before half-time as Sam Aspland-Robinson crossed while Italy’s points came via a drop-goal from Leonardo Mantelli.

England began the second 40 with more intensity and urgency which was highlighted throughout the half as scores from Quins’ Joe Marchant, Worcester’s Jack Singleton, Bath’s Zach Mercer along with a Penalty Try helped them cruise home.

Italy did have the final say at Manchester City’s Academy Stadium as Lorenzo Masselli touched down late on.

England captain and Man of the Match Harry Mallinder scored 12 points in Manchester as Martin Haag’s reign as the new head coach got off to the best possible start and his side will now take on Scotland at the CFA on Saturday before playing Australia at Sale Sharks’ AJ Bell Stadium on 15 June.

A star emerged at Manchester Academy Stadium as the winger from Tokai University scored three tries in 10 minutes and caused havoc in the South Africa defence.

All three of his tries highlighted different aspects of his game; awareness, composure and power. Moeakiola announced himself to the world stage and with one senior cap already under his belt, the future looks bright for him.

Despite a slow start from England against Italy, one man stood out from the rest. Captain Harry Mallinder produced a wonderful display to help kick-start his teams U20 World Championship.

As the match wore on England looked much more settled, but Mallinder’s presence on the pitch can’t be underestimated. 12 points scored and his link up play with Joe Marchant was excellent and encourging. Added to that, his cross-field kick for Aspland Robinson’s try was sensational. If he continues to have this kind of impact, England have an even better chance of going all the way in this tournament.

He shone in last year’s tournament and in truth needed to put in a good display for his countries sake. Ireland had lacked a clinical edge before this competition began, but Stockdale could well be the answer to their problems.

He can play anywhere across the backline and was solid in the air yesterday. He got himself on the scoresheet twice and his inventiveness was also on show as Ireland fought back against Wales. He now needs to keep rediscovering some of his good form from 12 months ago and if he does, Stockdale could play a key role for his country as the tournament progresses.

I could’ve picked one of these players, but quite frankly that would have been unfair! Zain Davids was awarded Man of the Match yesterday for South Africa at the CFA and it was easy to see why.

The flanker scored twice and despite his position on the field, he showed a skill set like a back and he combined that with his brute force to help the Junior Boks to an opening victory which at one stage looked like it might not happen.

Curwin Bosch was also a top candidate for the Man of the Match award. The Natal Sharks full-back ended yesterday with a 100 per cent kicking record as he nudged over eight conversions as well as a monster of a penalty midway through the second half.

Granted, the conditions were pretty much perfect for kicking in Manchester yesterday, but he struck the ball cleanly all afternoon. At the edge of 18, Bosch already offers so much. With that kicking accuracy combined with his dynamic skills where can act as another playmaker, Bosch and South Africa have the capabilities to dismantle teams.