Why Stuart Hooper’s Bath aren’t ‘getting ahead of themselves’ 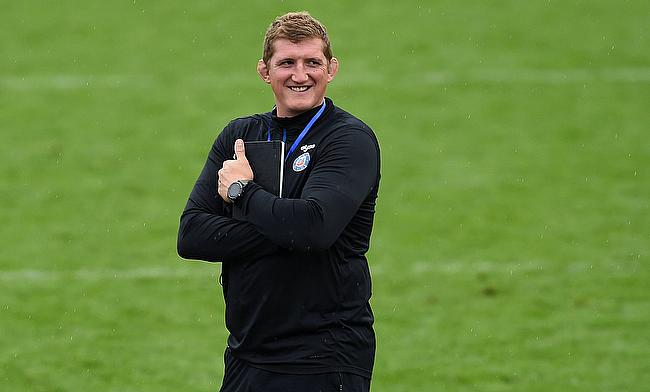 It has been a perfect return to play for Bath. Picking up 10 points in two games, Stuart Hooper’s side have been clinical in each of their fixtures, putting them right in the mix for a top four finish.

Playing fellow play-off contenders Northampton Saints tomorrow night, the Somerset club also face Wasps next Monday, another side in the hunt for a top third finish. Impressing at the weekend with their 38-16 win over Leicester at Welford Road, it is their pack dominated attack that has impressed many.

Against Leicester, four front row players crossed the whitewash, a unique occurrence in any case and seemingly the work of a head coach who used be England’s scrum coach and a Director of Rugby who used to be a lock forward is coming to fruition.

Tighthead prop, Christian Judge, says that the side have always wanted to use their pack as a driving force.

“We have said from the start that we want to have a rock solid scrum and lineout and maul,” Judge said. “We want to give our backs a platform to play from, but we want to be aggressive and it is something that we have talked about.

?? Team Announcement
Bath Rugby make thirteen changes for the trip to Northampton Saints including the return of Max Clark to the starting line-up. #WeAreBath

“We have worked really hard in training and it is something that we keep pushing ourselves to get better and better at. A good performance one week is great, but it is about if we can back it up week after week and that’s what we talk a lot about, just making sure that we can keep pushing ourselves.”

Stuart Hooper was involved with the last Bath side to make a real go at the Premiership. Making the final in 2015, the current Director of Rugby captained the side and could now be leading them on a play-off run once more.

One of just a few sides to have come back to play and picked up maximum points, Bath will face some stern tests this week against Saints and then Wasps at The Rec on Monday and Hooper is keeping grounded following two dominant victories.

“The lads put a lot of effort and a lot of energy into lockdown first and foremost and then, being very clear on what it is we want to achieve and there is a very driven group of young guys here now, who want to go on and do very well and I think we have seen that in patches in the Irish and the Leicester game,” Hooper said.

“The best thing for me is not getting carried away with it. It is two games; the boys know that. They know there is another one coming up Wednesday and another one coming Monday. The standards we deliver here in the week allow us to go out on the weekend, have that bit of freedom to go and be rugby players away from all the distractions that Covid has thrown our way.”

Coming off the bench on Saturday to play against Leicester, Josh Matavesi has settled in well at Bath following his mid-season move to The Rec. Closer to his native Cornwall and his parents, the back’s dummy and assist for Tom de Glanville was undoubtedly the highlight of Saturday’s game.

“We were pleased with the result, getting five points against Leicester, any Leicester side that they put out is a good job,” Matavesi said. “I know the boys who play for Tigers, they wear that shirt with pride, so coming out of Welford Road with five points is obviously a really good plus and then, the things that we can work on are really easy to work on. It is all positive stuff at the minute, so we have got a tough challenge on Wednesday against Northampton.”

Stuart Hooper has made 13 changes to his side that took apart Leicester Tigers at Welford Road. Matavesi comes in to start at fly-half, whilst Judge starts at tighthead and Beno Obano at loosehead.

Will Spencer makes his second debut for Bath in the second row, Tom de Glanville starts in the 15 jersey and Max Clark returns to the starting XV after several months out injured.