We’re getting the best out of the guys - Ed Slater 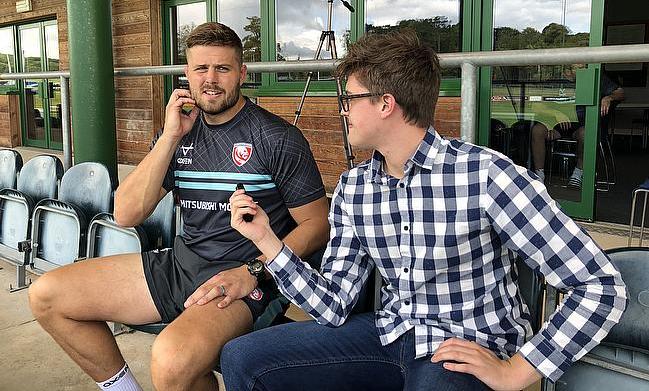 Well, that is one way to start an interview. Sat in the stand at the Gillman’s Ground on the Hartpury College campus, Slater was clearly more than comfortable in his surroundings.

Joining Gloucester as part of Johnny May’s move to Leicester, Slater is now heading into his third season in cherry and white, and after last year’s third placed finish, many who make their bi-weekly pilgrimage to Kingsholm during the regular season are expecting big things from Johan Ackermann’s side this coming season.

Last season’s performance was a stark improvement on 2018/19 where they finished seventh with the signing of Danny Cipriani helping to push the West Country side up the table. Slater believes that Gloucester have steadily improved in his time at the club and that the additions Ackermann has brought in have benefitted the team greatly.

“I thought in the first year that I came, there were glimpses of some of the stuff that was played last year,” Slater told TRU. “We’ve brought in some good, really talented players who have added so much. The likes of Jaco Kriel, Ruan Dreyer, Franco Mostert, these players came in and added to the pack.

“Then, obviously Danny (Cipriani) did his bit last year with the guys around him., but also, players that have been at the club for a long time, like Mark Atkinson for example, he is the one that stands out for me. He’s been at the club five, six years and he really came into his own last year.

“It is the confidence of what we’re trying to do and how we’re trying to play game. I think it suits a lot of the players that we’ve got in the squad and we’re getting the best out of the guys.”

Moving to Gloucester after seven seasons at his local club, Leicester, Slater settled into life at Kingsholm relatively easily. The lock’s leadership ability quickly became apparent on the field and Slater is regularly named captain when regular skipper Willi Heinz in unavailable.

It is at Gloucester where Slater has worked under a southern hemisphere head coach for a long period of time, with his only other previous experience coming in the form of Aaron Mauger.

“It has been a breath of fresh air for me,” Slater said. “I had a glimpse of it under Aaron Mauger, that southern hemisphere thinking so I had an idea about what kind of game Johan wanted to play.

Johan Ackermann: “Nothing will take away how proud we are of the team and the growth. It took Saracens years to get where they are today and that’s where we want to be.” pic.twitter.com/6ntwAdK7lR

“He gets a lot of satisfaction out of us coming up with ideas and putting them out on the pitch. The players enjoy that. They want to be involved in the game plan and, ultimately, if they want to buy in to what the coaches want, it’s nice to have a say in it.

“I think that’s the major change for players that have been here before and for guys that have come from different clubs, they’ll say; the players take a lot of ownership on how we play the game and you’ve actually got to put that down to Johan and his approach, as well as the onus he puts on players.

“Getting out there and enjoying rugby and not being so structured, having the freedom to play and make decisions without feeling like everyone is going to jump on your back. That has made a real difference and players probably run around without so much weight on their shoulders.”

Due to their third placed finish, Gloucester guaranteed themselves Champions Cup Rugby for another season. Slater believes that although the test of European rugby is one that he and his teammates are looking forward to, the late start to the season may take its toll.

A HUGE try for Gloucester who go through the phases before crossing over.

Buckle up for the final 20 minutes! ?? pic.twitter.com/urKi61rZtz

“I think we’ve certainly got the ability (to compete). It is difficult, there is no doubt, that’s why it’s the hardest comp out there,” said Slater. “I think the thing that is going to make it more difficult this year, is the consecutive run of games.

“In a standard season, it’s a little bit more broken up, or there is a break after the Champions Cup games and you can power through the Prem, play those big European nights, then you kind of take a back foot, have a break.

“This year I think you’re playing 15 games in a row to start off with once the Premiership starts. So, it is going to be a real test of the squad. Hopefully we can stay fit and if we can do that, I think we certainly have the ability in the squad to do well.”