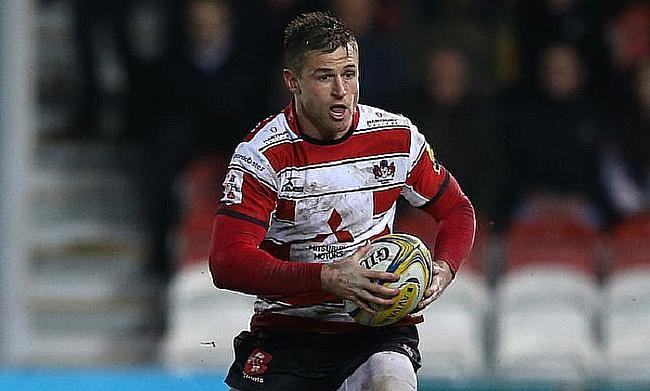 Head coach Johan Ackermann signs contract extension with Gloucester Rugby
Danny Cipriani wins the Premiership Rugby Player of the Season award
Trinder: “If I can play well for Gloucester and keep pushing forward, then I will see what happens.”
Henry Trinder and Marland Yarde included in England's training squad

Henry Trinder spoke to TRU about the unique way he is recovering from his latest injury, the upward trajectory of Gloucester and why Danny Cipriani deserves to be a part of England’s plans.

It is a feeling which Henry Trinder has become all too familiar with.

Trinder is one of Gloucester’s most experienced players and his performances in 2017/18 saw him deservedly earn a call-up to the England squad last year. He started against the Barbarians and he would’ve headed into 2018/19 with a possible World Cup place on his mind.

You couldn’t have argued with Trinder if had been thinking about Japan. Last summer was the first time he had played for England for seven years and back in 2011, a promising international career was in his sights.

However, a long sequence of injuries has put his England aspirations and a first cap on hold. Shoulder and hamstring problems plus two anterior cruciate ligament reconstructions led to Trinder thinking about retirement, but 2017/18 was a lot more positive.

Eleven tries in 25 appearances meant Trinder began the past season with a new lease of life, however, the injury curse struck again in March after he tore an Achilles tendon in training.

Henry Trinder has torn his achilles in training. One of those players oozing talent whose body has broken down on him far more than seems fair at times. Wishing him a speedy recovery. (via @RobSportsTwit)

“I have done this a few times now!” says Trinder. “It is a bit boring and frustrating!”

He doesn’t need to put a jokey spin on his latest long-term injury especially as Trinder missed out on the final portion of last season as Gloucester went on to confirm a top four finish in the Premiership for the first time since 2011.

“It [the rehabilitation] is going well and we are on track,” he says. “I am three months into the process since my operation.

“I am working on strengthening up my calves and my Achilles to hopefully move on to a bit of light jogging and running in the next month or two, but I am not putting a timescale on things just yet even though I’d like to be back for the start of next season.

“I am just cracking on with it all whilst everyone else is away! It is a quiet gym and it can be a pretty lonely place, but it is part and parcel of it. I am in good hands and things are going well at the minute.”

There have been numerous setbacks in Trinder’s 12-year career, but there is something different and unique about how the 30-year-old is recovering from this particular injury.

Even during his excellent campaign in 2017/18, Trinder did have some Achilles issues and he also experienced tight calves and tired legs. He feels that may have been down to the amount of rugby he played that year so the centre was keen to find a recovery technique which would continue to also enhance his performances.

With Trinder then suffering his injury and undergoing surgery, he turned to KYMIRA Sport, whose garments use infrared technology to accelerate the recovery process. Founder of KYMIRA, Tim Brownstone, stated: ‘Without doubt our garments will enable Henry to start competing again sooner than if he uses standard compression wear’ and Trinder admits he can see a huge difference.

“I was really struggling with little issues a year ago, probably halfway through last season,” Trinder continues. “I was looking for a recovery technique to really enhance what I was doing. In terms of a product which could also give me a leg up on everything else, I came across KYMIRA. Bob Stewart, the England physio who I know well, said they were playing around with the KYMIRA products.

“I tried it out and got in touch with the guys at KYMIRA and that’s when they showed me the science behind it. It is lot more than just usual compression! There is an emphasis on the infrared technology which is woven into material. I call it its ‘superpower’.

“It increases the blood flow in your body which ultimately means you produce more oxygen and get rid of the waste quicker. It is fantastic.

“Whether it was mental or not, I genuinely woke up struggling with my lower body until using the products and when I don’t wear them now, there is a massive difference. As soon as I finish a game, I am in the products head to toe which my wife loves! It is something which has become part of my life now.”

With Trinder seeing the benefits of the KYMRIA products, he was keen to get on board and promote the brand. With giants such as Nike, Adidas and Under Armour in the skins market, Trinder is confident KYMRIA can continue to become more established.

Whilst Trinder is focused on his recover away from the field at present, on the pitch, his club side have seen their reputation grow over the last 12 months.

Under Johan Ackermann, the Cherry and Whites continue to make massive strides and despite falling short against Saracens in the Premiership semi-finals at the end of May, Gloucester seem to be heading in one direction.

The acquisitions of players such as Franco Mostert and Danny Cipriani have added a different dynamic at Kingsholm, but Trinder was keen to stress it has been a whole squad effort.

“We are happy with the direction we are going, but obviously when you get into the top four, you want to win it,” says Trinder.

“From where Gloucester has been over the last four or five years, this is leaps and bound ahead. The group of boys in terms of depth and in terms of character and experience means it is probably one of the strongest squads I have been involved in.

“In terms of our next step, we are a dangerous team. We have always had that element of doubt of really pushing on and then challenging for that top four. I think this year was that step up and we challenged the whole way through whereas in previous seasons, we have been in the top four but fell away at the end.

“That is something we wanted to get rid of and we did that. Everyone has contributed and you could see the consistency throughout the season.”

Six shining stars were nominated, but there could be only one winner...

Danny Cipriani has been named Gallagher Premiership Player of the Year ??

Key to Gloucester’s consistency and strong displays in 2018/19 was Cipriani. The fly-half was outstanding and claimed the Premiership Player of the Year award in his maiden season with the Cherry and Whites.

In a campaign which began with Cipriani being fined £2,000 for an assault in a Jersey nightclub, he certainly did his talking on the pitch this year and many, including Trinder, want to see him involved in Eddie Jones’ World Cup plans.

Trinder added: “He deserves the chance. In terms of selection, it is hard and sometimes great athletes whoever you are, don’t get that recognition.

“He is one of the best 10s in the league and hopefully he can find a way of shifting into that England squad because you can see what he can do. He can really pull the strings and can definitely do it at international level. He has proven he is definitely worthy of it.”

In April, Cipriani committed his immediate future to Gloucester after signing a new three-year deal and he will no doubt play an integral part in the 2019/20 campaign.

Next term will also be a special season for Trinder. The centre will be entering his 13th year with Gloucester and he will be celebrating his testimonial. Dubbed as the ‘Trindermonial’, Trinder is excited for the new campaign to get underway not just for that reason, but because he is looking forward to returning from injury as Gloucester aim to continue challenging for honours.

“Next year is a good opportunity for us to go forward and I don’t think we have ever been this confident in terms of going into a season again,” added Trinder, who has made 162 appearances for Gloucester.

“Obviously how we’ve performed this year, then sets bars higher and sets the standards we have to reach again.

“In terms of having my testimonial and having a bit of a celebration as well, it could fit in quite nicely! I would absolutely love to win the Premiership this year. I will take all of the credit!

“It is an amazing honour for me to have the fans there who want to go out of their way to show their appreciation so I am very grateful for it and I am looking forward to it.

“I am now more desperate than ever to get back stronger and really showcase that I want to be part of this team going forward.”