Victory in Rome for Ireland 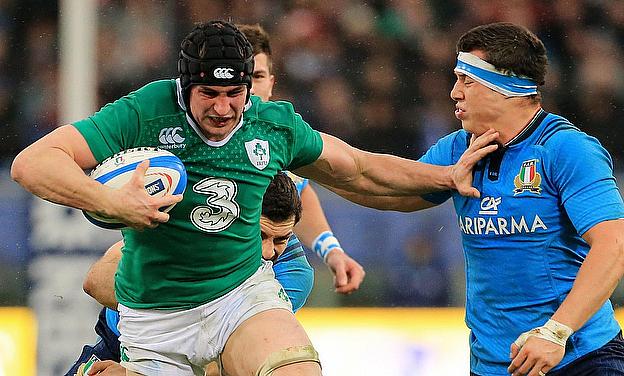 Tommy O'Donnell breaks through to score the second try
©PA

Two tries in three minutes while Leonardo Ghiraldini was in the sin-bin saved Ireland before they beat Italy 26-3 at the start of their RBS 6 Nations title defence.

Conor Murray and Tommy O'Donnell sneaked scores while hooker Ghiraldini was off the field, after Ireland had laboured with scant return in a tryless first hour.

Sean O'Brien suffered a hamstring injury in the warm-up, so the luckless Leinster flanker's wait for his first Test action since November 2013 goes on.

The 27-year-old will now be an automatic doubt for Ireland's second-round clash with France in Dublin next weekend.

O'Brien has only just recovered from 14 months battling two consecutive shoulder reconstructions, and the 30-cap loose-forward cut a disconsolate and broody figure on Ireland's bench.

Ireland's management were just as stern-faced despite victory, because the visitors never found any control or fluency at the Stadio Olimpico.

Italy lost all five Six Nations matches last year, and Ireland thumped the Azzurri 46-7 in Dublin: there would be no repeat this time.

Ian Keatley landed four penalties and a conversion but failed to seize his chance to prove he deserves more time in Ireland's 10 shirt.

The Munster fly-half was unable to boss his backline, all too often standing all too deep in attack: fit-again Johnny Sexton will doubtless return against France next weekend after 12 weeks missing with concussion.

Ireland may live to regret not racking up a bigger score against the lowly Italians, who tend to crack as tournaments progress.

Should this year's Six Nations come down to points difference, just as last year, the Irish may rue not pushing the envelope somewhat once this game broke up.

All the fizzing electricity from England's tournament opening 21-16 win over Wales in Cardiff turned to dismal static in a humdrum first-half in Rome.

Where Wales sparkled and England shone, Ireland could only glower in the gloom of uninspired, guileless first-half attacking play.

Italy proved the architects of their own discomfort right from the off, Matias Aguero penalised for slipping his bind at the scrum.

Jack McGrath atoned for conceding a scrum penalty by winning a fine choke-tackle turnover, in tandem with Peter O'Mahony.

Keatley endured a mixed opening, slotting his penalty calmly, but throwing a loose pass and also being charged down by Michele Campagnaro.

Ireland drove close from a lineout maul, but Tommy Bowe could not tap Murray's deft chip back inside with enough space for the scrum-half to wriggle home.

The visitors had to settle instead for Keatley's third penalty of the afternoon.

Italy then set camp in Ireland's 22 but after one driving maul Kelly Haimona opted to strike at goal.

The New Zealand-born fly-half landed the goal to cut Italy's deficit to six points at the break.

Ireland started the second half searching for some kind of fuel injection, but still their attack misfired.

Keatley produced a neat half-break on the blindside, only to force an attempted last pass: Campagnaro knocked on trying to intercept, allowing Ireland a quick wipe of the brow.

Keatley almost cut the line again in Italy's 22, but Sergio Parisse produced a fine ruck steal to ease the pressure.

Payne and Henshaw noticeably picked up the pace after the break, but again Ireland turned to Keatley's boot to extend their lead to 12-3.

Ireland dispensed with posting penalties instead chasing the jugular just past the hour, punting to the corner for an attacking lineout.

Ghiraldini spoiled Ireland's maul from an offside position and was duly sin-binned for his troubles.

Ireland went straight for the lineout once more, and finally broke the try deadlock.

Murray wriggled home after the pack drove to the whitewash, with Keatley converting for a 19-3 lead.

No sooner had Ireland scored than boss Joe Schmidt brought off Keatley, Paul O'Connell and Peter O'Mahoney, no doubt with one eye on next weekend's France clash.

Ian Madigan slotted the conversion to gloss the scoreline, but Ireland were unable to maintain that momentum once Italy were restored to full complement.

Italy's rally forced Ireland to defend with zeal and composure at the death when Schmidt's men would sooner have been attempting to boost their points-difference tally.

Andrea Manici's sloppy spilled ball dented Italy's momentum, before Haimona had a try ruled out for the slightest of knock-ons from Parisse.