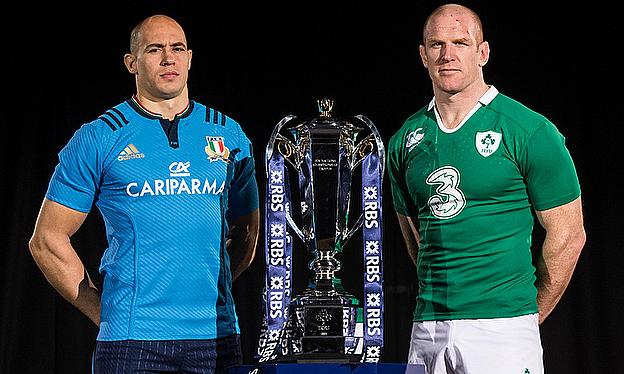 Ireland's first hurdle is away against the Italians
©RBS 6 Nations

Ireland enter this years Six Nations competition as reigning champions and favorites but can they keep up the momentum from a successful 2014 and win two in a row? Talking Rugby Union previews their chances and looks at the key players, biggest weaknesses and the fresh faces ahead of this year's tournament.

The hype-machine has gone into overdrive. Ireland has been transformed into the Six Nations reigning champions and the third best ranked team in the world from the joint worst team in the competition only twenty-three months ago.  Heading into this year’s competition the pressure has increased hugely after a memorable 2014. Let’s take a look at some of the key areas and talking points surrounding this Irish side and whether Irish eyes will again be smiling come the end of round five.

Last year’s campaign was one which Schmidt’s Ireland team really needed to preform at and perform they most certainly did. After last minute agony against the All Blacks in the prior autumn internationals, Ireland dispelled any notion that the game was a one off, and cast into distant memory the poor performances under pervious head coach Declan Kidney. Winning four of their five games, including a hugely impressive home win over Wales and a nail biting victory against the French in the Stade de France, Ireland won the Championship in Schmidt’s debut season. A win over the English would have almost been too perfect but still not a bad start to 2014.

In Jamie Heaslip, Conor Murray and Jonny Sexton Ireland possess an eight, nine, ten axis that can only be bettered by that of the All Blacks in world rugby. The rise of Conor Murray since the 2011 Lions series in Australia has been incredible. He is now a key player and a real leader in this side. Jamie Heaslip shows the type of consistency week in week out that defies human nature. The man has self-proclaimed ‘wolverine’ blood coursing through his veins but he has suffered from a rare shoulder injury as of late and will miss the opening game. With these two operating inside him, Sexton has the platform to conduct the orchestra at his own pace and impose himself on the game. An awful lot of pressure is alleviated thanks to Murray and Heaslip. It is in this axis that the real strength of this Ireland side lies even if two of the three will miss the opening exchanges with Italy, a win is still expected.

The scrum has for many years been a contentious issue surrounding Irish teams. Rarely, if ever, is the set piece used as an attacking weapon by which the men in green can assert dominance over an opponent. Mike Ross, the mainstay in Schmidt’s Ireland sides to date has lost his place from the entire match day twenty-three man squad at Leinster recently. Although Ross will start the game against Italy, his form has been far from satisfactory. Marty Moore is snapping and his heels and do not be surprised to see him leapfrog Ross into the starting team. At loose head Cian Healy hasn’t yet fully regained fitness from a hamstring injury and Jack McGrath is only just returning from a three-week suspension thanks to heavy use of the boot on Irish teammate Rory Best in the Pro 12. McGrath will start the opening game but one expects he is still short on the required match sharpness even after a hit out against England Saxons last Friday. The highly inexperienced James Cronin will occupy the replacements bench given Dave Kilcoyne’s injury. Ireland now entire the competition with undercooked personnel in an area of preserved weakness. With the Italians first up, there is a tough test in store.

Jonny Sexton is the most important player in this Irish side. The Racing Metro pivot is Schmidt’s entrusted lieutenant on the pitch, tasked with implementing the coach’s game plan. His status as the number one out-half in world rugby is assured given Dan Carter’s run of injuries and a certain Jonny Wilkinson calling time on an epic career last season. If Ireland are to stand a chance of winning this year’s Six Nations Championship they need Sexton back from his enforced layoff from the game due to numerous concussions, as soon as possible.  His absence will be manageable in the opening game against Italy given the gulf in class between the sides but his inclusion against the French next week and in the forthcoming rounds is crucial. There is a worrying void between Sexton and those next in line with Ian Madigan, Ian Keatley and Paddy Jackson (injured) currently well short of the required standard.

Murphy who made his debut last year off the bench will get his first start in green against the Italians and he is a man to look out for. A work horse around the pitch he has the uncanny knack of popping up in the right place, at the right time. He has big boots to fill stepping in at number eight but his return to good form with Leinster after recent injury means he is well equipped to handle the pressure. With Heaslip only set to miss the opening game, Murphy’s real impact on this tournament could come from bench after round one.

Joe Schmidt is deserving of an individual mention. His meteoric rise in International rugby in such a short space of time is testament to his work ethic and attention to deal. He is a master tactician whose meticulous preparation on the training field leaves no stone unturned for his players. Coaches will try to outwit and second-guess what he is thinking such is his stature and influence on the Irish side. It is indicative of how good this man is that the majority of the column inches before the opening game against Italy are dominated by his name, compared to previous years when players like Messrs. O’Gara and O’Driscoll commanded most attention.

In naming an initial 46-man squad you would think a large number of these would be uncapped. However Nathan White and Jack Conan are the only players yet to earn a full cap. White is the more likely to feature of the two, given his status as third choice tight head. Conan is a long way down the pecking order in a hugely competitive backrow, but should the worst happen he has the size and quality to make an impact if called upon.

This time round: 1st

The tag of favorites does not generally sit well with Irish teams. This time around there is a sense that under the control of Joe Schmidt, Ireland can embrace the tag and live up to expectations. It is strange to think that a side without a certain Brian O’Driscoll on the team sheet could possibly win a championship, but such is the strength and depth Ireland has at their disposal that another title could be a realistic outcome. They welcome England and France to Dublin with this particular schedule deemed slightly easier compared to the reverse scenario last year. Given Ireland won the championship twelve months ago traveling to London and Paris, it does bode well for them. I expect the clash with Wales in Cardiff to be a title deciding game. If Wales can overcome the English challenge  tonight, I expect them to ride the wave of momentum and be the biggest challengers to the reigning champions.

Given how plagued England are with injuries, Ireland really have no excuses. The fitness of Sexton, Heaslip, Murray, O’Connell, O’Brien and Kearney will be the key to success. Keep these six players fit and involved for as many minutes as possible and they could be celebrating back-to-back championships in the Emerald Isle.