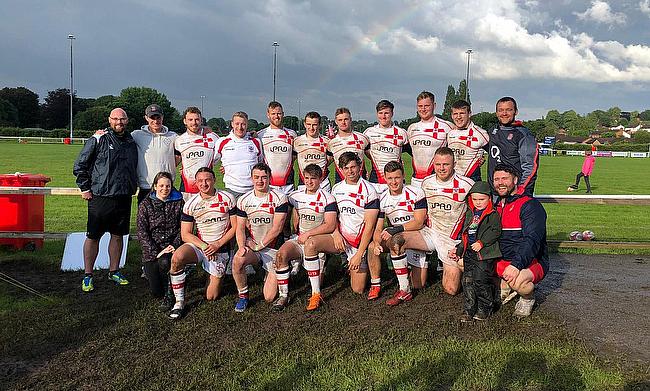 To describe the weather on Saturday as hot, would be an understatement. Sweltering would be far more apt. Not deterred by the more than perfect conditions, Sevens sides from across the country descended upon Nottingham Rugby Club to try and be crowned the best domestic side in English Rugby.

Two sides in particular caught the eye of TRU. England Universities sent along a men’s and women’s side to Nottingham in the hope of coming away with titles. They set up shop in one of the main stands at Lady Bay, trying to avoid the searing sunlight as much as possible.

With a physio for each team, it was clear that each side meant business. The players seemed relaxed, poised and ready to prove that they possessed the best talent in the country. The women’s side had plenty of experience in their ranks, with many of the 11 selected having had Tyrells Premiership experience this season.

As for the men, they were no different. Led by Leeds Beckett’s Charlie Venables, there were also six players from Head Coach’s Rob Jones’ Manchester Metropolitan side.

The likes of Calum Owen and Hallam Chapman had experience outside of the university game too, both having played in the National Leagues with Sedgley Park Tigers and Sale FC.

Their experience shone through in the pool stages, dominating their opposition in each fixture. Jones’ side didn’t concede a point heading into their quarter final against the Seven Dwarves: “Massive, massive plus, “Jones said. “Zero Conceded. I managed to rest a lot of the team, a lot of the boys have only played eight or nine minutes, so they’re feeling pretty fresh going into the cup quarter-final.”

For the women’s side, things went no differently. Winning each of their five games and only conceding one try, Mark Jeffreys, Director of Sport and Physical Activity at Birmingham City University, said he was extremely pleased with how well his side had performed with having only had limited time together.

“With the University sevens, we never know what we’re going to get until everyone has been nominated. We’ve got a really good group of girls together this year and they’d never played together before Chester 7s [two weeks ago] and they gelled really well together quickly.” Jeffreys said.

“It was really good to win that. We played against Red Panda in the final and we were expecting that to be a really tough game, but actually, we ended up winning relatively straightforwardly. That was because the girls really played good sevens.

“It is interesting, when you come to sevens, especially in the women’s game, sometimes you get some teams who try and play 15s with seven players. But the girls played some really good sevens and they really continued that today. The first game, we played against the Hammerheads, the intensity was really, really good and they maintained that intensity as much as possible in this ridiculous heat.”

Unfortunately, Universities Women would only play five games at the tournament. The side were removed from competition after the revelation that teams weren’t allowed to field players with more than a certain amount of top-flight experience. Not alone in this, Hammerheads were also taken out of competition, resulting in Cats 7s beating the Mayans in the final with a last gasp try.

It was difficult not to feel sympathetic for the players. In a way, they were being disciplined for their talent, not for a clear violation of the rules. For Sheffield Hallam’s Hannah Thornhill, it was her final day as a rugby player before moving to Bath to join up with the Olympic skeleton team with the hope of going to the Winter Games in Beijing.

After beating The Seven Dwarves, Rob Jones’ side would play the Akuma Beavers in the semi-finals. However, it wasn’t meant to be for the side. A late try from the Beavers, following a potentially contentious decision from the referee, in which a Universities play was guided from his desired path on a kick and chase, knocked the youngsters out of the competition.

The Beavers fell at their final hurdle as well, losing with the final play of the game against the Skeat Sevens, who had the likes of Myles Bean (Cambridge RUFC) and England 7s international, George de Cothi, in their ranks.

National Champions - what a spectacular set of boys. 15 Wins , 0 Losses. Thanks to all the support ? onwards and upwards .

Despite not picking up any silverware, both coaches were upbeat about the benefits of university rugby: “They’re a great age to coach and they’re as keen as mustard to learn,” Jones said. “That’s what this environment is about. Learning. They’re really positive, motivated and I think that energy transfers onto the pitch.

Jeffreys added: “It’s great to see that women’s sport in general is just getting better and better. A lot of it is because it’s getting more media attention. Therefore, the profile of women’s sport is just increasing, and young girls have now got role models.

“There’s a lot more girls playing at a younger age, it’s the fastest growing part of rugby across the board, so it is important that the RFU really embrace it and put in the structures to support it and develop it. I think university rugby is a great place to do that.

“You can get a lot of players that are very sporty, they played a whole range of different sports, but never tried rugby and university is a really great place to try that. That’s where sevens is really good. To go from one sport to 15s can be a bit daunting because of the physicality of it. Whereas, sevens there’s a lot of space, a lot of running and a lot of skill.”

So, that’s domestic sevens wrapped up for another year. As ever, there were thrills, spills and plenty of talent on show. But, as ever, university rugby shone through, proving what a valuable stomping ground the platform is for so many players.