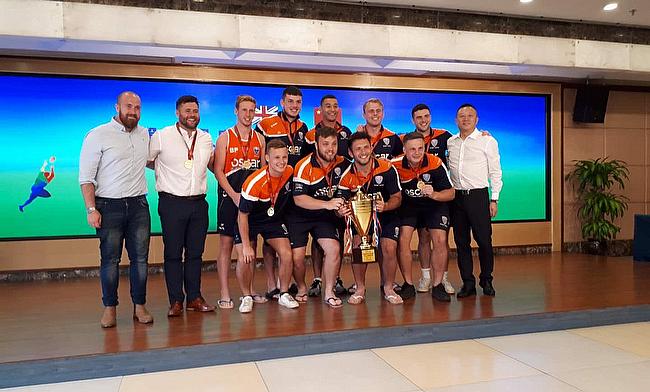 It is just over eight months since Manchester Met University began the 2018/19 season and after kicking-off the term with a thumping win against Durham, their final destination in a promotion-winning campaign was China.

It was another superb year for Rob Jones’ side as they clinched the Northern 1A title before advancing into North B via the play-offs. On the Sevens scene, they aped their XV-a-side success by securing the BUCS Championship 7s title in Leeds before they headed off to Asia at the end of May.

Everyone involved with MMU Rugby has high aims, but they are also realistic as they continue their rise towards BUCS Super Rugby. It is fair to say they are turning heads when it comes to university rugby and to conclude their season with a trip to China highlights their ambition.

MMU were selected by the British Council and The Federation of University Sports of China to represent the UK after a meticulous application process. The continuous sporting development of the university over the last few years was a major tick in the box for MMU and the next part of their rugby odyssey took them to Zhuhai in the South of China.

“First and foremost, it was a great experience,” said head coach Jones. “China is not a place you may go in your life and it has probably only opened up as a country over the last decade or two.

“The applications had to be 30 pages long and they wanted to know what you were earning and what your kids were earning, even though my kids are three and four! They also wanted to know things like what your parents did for a living so the whole process to get in was tough!

“We were always going to get in because we were invited by their government. Everything is centrally controlled so we had a letter of invitation from the government from the FUSC (Federation of University Sports of China). It was them who organised everything via the British council. China funded everything their end and the university had to pay for our flights and visas. The support we got from our own international department was fantastic.”

Jones has been integral in MMU’s rise in the university game. Successive promotions as well as two cup wins in three seasons emphasises the upward trajectory his side are on so adding a positive experience in China to their latest achievements was another feather in their cap.

Most universities would never get the opportunity to travel outside of Europe for a rugby tour, let alone China and Jones was keen to stress how proud he was of his players in terms of the way they conducted themselves throughout the trip.

“We were looked after wonderfully from the moment we landed to leaving,” Jones said. “We were made to feel very welcome. Of course, it is a different culture and you have got to embrace that. The lads were all well prepped about how we should conduct ourselves because of the different culture barriers. The lads were excellent and they represented, integrated and conducted themselves immaculately on and off the pitch.

“The feedback from me and my boss Neil Hurran is that we, and the university, are very proud of the players and we achieved what we set out to do. It is definitely something we will look to do again. It just shows, again, that coming to Manchester Met University gives you these opportunities.”

On the field, there was more silverware for MMU to celebrate as they won the tournament held in the UK-China University of Sport week. Three victories against Beijing University, Beijing Agricultural University and fellow English side, Birmingham City University, saw them lift the trophy in challenging hot and humid weather conditions.

Jones admits the rugby was secondary on this occasion as one of the main reasons for the trip was about teaching and learning the game, which the head coach certainly enjoyed.

“It was a small tournament and of course, they wanted to see the rugby and see us perform, but there was a lot of coach education and a lot of interviews and questions”, Jones said.

“If you are a native from China, it is hard to see outside of the country. If I wanted to show some Sevens on YouTube as an example, you can’t show them it and that is very challenging. Our way of coaching and certainly my way of coaching is very different to their autocratic style, but I think they did listen to our methods and enjoyed them which was great.

“Also, on the back of us going out there, there are a couple of guys from the universities who want to come over to Manchester Met and study which is great.”

It is clear China want to keep developing in certain sports. Major funding from the government has gone into football academies in the country and Rugby Sevens is growing too. With the Olympic Games coming to Japan next summer, China do have their sights set on playing Rugby Sevens on a world stage in the near future.

Jones added: “I think if they want to be good at anything, they can be. You already have the South China Tigers in Global Rapid Rugby so there is a lot of rugby in Hong Kong and a lot of rugby now which is starting in South China.

“What we know is that the government are not short of money and that was evident when we were there. They put a lot into it in terms of branding, the staff, the quality of equipment etc. China wants to be an Olympic power and an Olympic Rugby Sevens force.

“They have realised they need to put that into higher education to be successful and they were really there to learn from us. They will get it, how long that will take, I don’t know but they will get there.”

Whilst China aim to make forward steps in the Sevens game, Jones is maintaining his progress back in England with the English Universities Sevens side.'

Under the English Universities Sports banner, the Men’s team have been competing in National tournaments over the last 12 months since Jones took over the reins and their main ambition is to be part of the Home Nations competition.

After a recent trial day at Warwick University, Jones has selected a squad for Chester 7s this weekend consisting of a number of players who ply their trade outside of BUCS Super Rugby, whilst there is also a sprinkling of talent from the top tier.

With a Women’s side full of international quality also heading in the right direction under the guidance of Mark Jeffreys, Jones sees a bright future for both English Universities teams.

He added: “In terms of our recruitment for the Men’s team, we cast our net far and wide. Some of the BUCS Super Rugby Universities perhaps don’t see this as pathway and not as relevant. I am not sure why because I have actually been contacted by some of the players from these universities because they want to come and play in that professional performance environment for their country.

“As ever, there are exceptional players all over the country at every type of university. We do have two players playing this weekend who do represent BUCS Super Rugby sides, but every single one of the players we have chosen could play at that level.

“It was really challenging to select and there were some disappointed lads, but we are confident we have got the right blend to go and challenge and win at Chester before the National Finals in a couple of weeks

“Both the Men’s and Women’s teams are constantly looking on how we improve and how we develop because it undoubtedly gives players a wonderful opportunity. It can be a real platform to ignite your career from.”