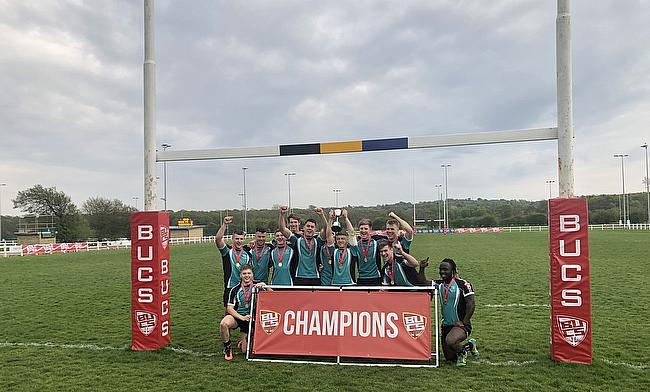 Leeds Beckett stopped Hartpury University from claiming a double-winning season with a dramatic 26-21 victory in the BUCS Championship 7s final.

Beckett, who lost in the BUCS Super Rugby final against Hartpury at Twickenham just under a month ago, battled back from 12-10 down to end a very solid season on a positive note.

The final, from start to finish, was a contest played at a high tempo as both sides wanted to conclude the campaign with some silverware. Hartpury started brightly and they were led by Toby Venner, who recently played in the GK IPA Championship for the Gloucestershire outfit.

At times, Hartpury did look like they could run away with the final, but Leeds Beckett hit back and took their chances to clinch the title in their home city.

Leeds Beckett were drawn alongside Northumbria University, Swansea University and the University of Edinburgh, but Kerry Wood and Colin Stephens' side advanced into the knockouts with minimal fuss after securing three straight wins.

Northumbria’s side contained Newcastle Falcon George Wacokecoke and despite losing their opening match to Beckett, Darren Fearn’s men beat Swansea 29-10 before hammering Edinburgh 24-0 to qualify for the quarter-finals.

In terms of Hartpury, they performed similarly to Beckett. Sean Lynn’s side began the day with a 38-0 win over Nottingham Trent University and that set the tone for them for the rest of the pool stages. Convincing wins against the University of Bath and Cardiff University meant they would meet Northumbria in the last eight whilst Cardiff also went through.

.@LeedsBeckettRFC were able to claim silverware after Twickenham heartbreak! #BUCS7s.@wooodyNZ: “I am just pleased for the boys. We have got a couple of guys leaving the squad so it is just a great way to finish their rugby.” ???? pic.twitter.com/ir3oAgPd73

Durham University came into this competition as the reigning champions and even though Head of Rugby Alex Keay admitted his side were missing a couple of players, the Palatinate picked up three wins from their four matches to advance from their pool.

Quarter-finalists from last year, Cardiff Met, made it through to the knockouts once again as they topped arguably the toughest pool of the lot.

How Leeds Beckett and Hartpury reached the final

Leeds Beckett found themselves in the last eight once again and they eventually got the better of Cardiff (25-19) in an enthralling contest. Whilst Beckett’s win was hard-earnt, Hartpury remained in cruise control as everything continued to click in their 24-0 win over Northumbria.

Durham were clinical as they managed to gain their revenge over Newcastle with a 30-10 triumph to set-up an intriguing clash with Hartpury in the last four while Loughborough put in a corker of a display to beat Cardiff Met 21-5.

With BUCS Super Rugby champions Hartpury facing Championship 7s holders Durham, it was always going to be a pulsating semi-final and that proved to be the case.

A month on and we have the same finals as we had at Twickenham:

What will be the outcome this time around in the #BUCS7s? pic.twitter.com/4AhFWrw9pj

Hartpury made a quick start and looked in control, but Durham showed great character to get back into the contest and they did lead during the second half. However, Hartpury were able to get their noses in front once again and it was a lead they didn’t relinquish.

In the second semi-final, Beckett had to overcome Loughborough and they did just that as they won 36-12 to set up another showdown with Hartpury.

On this occasion, there was joy for Kerry Wood and his side and it was the perfect way for Beckett to round off the season.