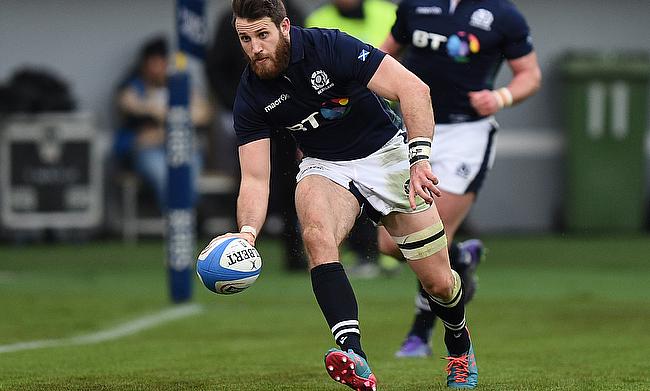 Scotland's Tommy Seymour wants to back up their two wins
©PA

Tommy Seymour is targeting consistency throughout games and tournaments alike as Scotland look to finish their RBS 6 Nations campaign on a high.

After nine consecutive defeats in the competition, Scotland seek a hat-trick of wins when they take on Ireland in Dublin on Saturday.

Victories over Italy and France have vindicated the Scotland camp's belief they were making progress under Vern Cotter, especially after coming within moments of making the World Cup semi-finals.

Seymour was disappointed that Scotland failed to pick up where they left off during defeat by England, especially, and to a lesser extent Wales in Cardiff.

But the Glasgow player feels they can now build on their first win over France in 10 years.

"It's as much about playing for the 80 minutes," the wing said. "Against Italy we maybe didn't play for the whole 80 but we played the majority of the game very well and we had a crucial moment when we were nine points down and managed to repel an attack and go up the other end and score.

"Against England, we didn't have an 80-minute performance or at least a large proportion, and that makes it very hard to get victories. We probably had a couple of lapses against England and Wales which allowed them to get tries.

"The Italy victory gave us confidence and France was probably the most complete performance from us during the tournament.

"The next step is doing that on a consistent basis. There is no point in ebbing and flowing, playing to your potential one week and dipping back down the next week.

"That is something we have talked about a lot over the last 18 months.

"The real key for this team is getting wins and backing them up and increasing that confidence within the team.

"We definitely have the potential to do it, to be a team that is consistently challenging and winning games."

Seymour saw that feeling intensify during a long build-up to the World Cup last year.

"That was a real key for us because, like many teams, we got a solid block of time where we could implement structures and Vern could really get his hands on us for an extended period of time to get his thinking across and get us playing the brand of rugby that we wanted to play.

"We went into the World Cup and managed to do that. Ideally it would have taken us less time to click back into that but maybe we needed a couple of games to get back into that frame of mind.

"That's something we needed to work on as a squad, to be able to flip back in and get back to that way of playing quicker."

Scotland are aiming for a third consecutive win in the tournament for the first time since 1996, when it was still the Five Nations, but Seymour is not interested in statistics.

"It's two wins, we have played some good stuff and enjoyed the success but we're not getting ahead of ourselves," the 27-year-old said.

"Ireland in Dublin are an incredibly tough team. I know they are not going to be champions again this year but they have been the leaders in terms of northern hemisphere rugby for the last few seasons. So it's a serious step for us to take.

"Obviously if we play for 80 minutes and play well then we are in with a shout but there is no point looking at facts and figures and the history books, we have to concentrate on controllable aspects.

"They have ebbed and flowed through the tournament as well but they have come off a huge win against Italy, which will give them a huge amount of confidence. They got nine tries and ran rampant and I'm sure they will be keen to back that up.

"Unless we go over there with full capacity, it's going to be a difficult day."