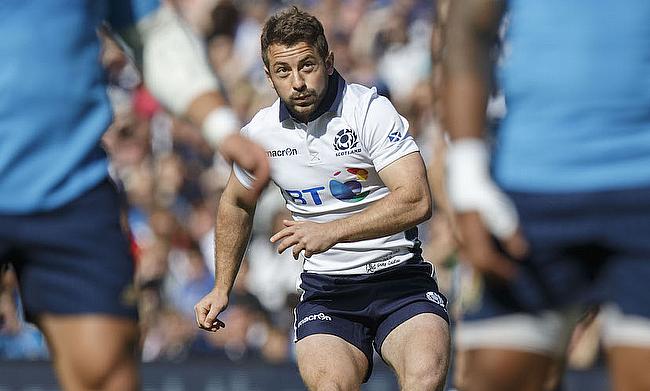 Scotland captain Greig Laidlaw is adamant that their consecutive RBS 6 Nations victories can be a springboard to better times in the competition.

Scotland halted a run of nine straight Six Nations defeats in Rome before claiming their first victory over France in 10 years on Sunday.

Laidlaw was convinced Scotland were close to winning games despite opening defeats by England and Wales and he feels they can become a more consistent side under Vern Cotter's continuing influence.

Scotland will be without injured forwards David Denton and Jonny Gray for their final RBS 6 Nations match against Ireland in Dublin on Saturday but Laidlaw is looking to finish on a high.

"Of course we can get better," the Gloucester scrum-half said. "We are slowly going forward. We just need to become more consistent now.

"The first game we have probably played the worst game and got beaten by six points. Since then we have played really well and consistently performed well throughout the championship.

"Our set-piece has functioned, our defence has been good, we have held the ball well.

"We need to just get better at doing that over and over again and we will become a very good side and a tough side to play against.

"We really felt as a group we weren't that far away and we are delighted to win the last couple of games to prove that to ourselves and to some other people as well.

"Defensively we have really fronted up as a team and we are not conceding as many tries. The set-piece has been outstanding, both the scrum and the lineout. In international rugby you need that to launch to get into the game.

"I think we are causing teams a whole lot of problems the way we hold on to the ball and kept teams under pressure. You can see that with the number of tries we are starting to score. And a couple of individuals along the way have really stepped up."

Scotland's turnaround means they are one win away from only their second top-half finish in 10 years. They have not collected six points since 2006.

Laidlaw added: "We have one big challenge left which is going to be tough. They are the reigning champions and in their home stadium, but we have got to play with confidence and if we front up well we are in with a chance to win the game.

"To go there and win would send out a big message but we are not going to get ahead of ourselves. We know it's going to be tough."

But Laidlaw admits the Scots go to Ireland on a high.

"When you are players, it's probably one of the best feelings ever when you win," the 30-year-old said. "You get 10 seconds straight after the full-time whistle that's absolutely ecstatic and everything is just easier after it.

"The next day, you are never as sore. It's just a knock-on effect. The first day you come back together as a squad, everybody feels better about each other and better about the team. So we are in a good place and we need to try and capitalise on that this weekend."

Lock Gray has been ruled out after suffering a partial tear to a pectoral muscle against France while Denton has returned to Bath for further treatment on a groin problem.

Meanwhile, Laidlaw vowed to blank out the presence of touch judge Craig Joubert, the man whose mistake cost Scotland a World Cup semi-final place last autumn, before he compounded his refereeing error by running off the park without shaking hands with Laidlaw and his team-mates following their last-gasp defeat by Australia.

"Craig Joubert won't affect us as a team and he certainly won't affect what we do on the field come the weekend," Laidlaw said.

"We can't worry about the referee or the touch judges. If we start doing that we will take our eye off the ball. We will be solely fixed on our role and what we have to do on the field. We will remove all that other stuff that's in and around us."