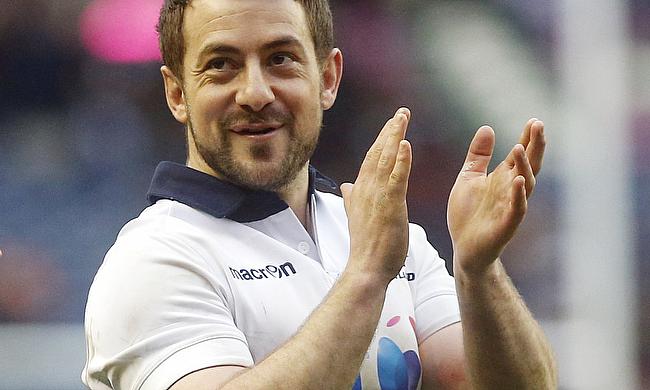 Scotland skipper Greig Laidlaw has urged his team to finish their RBS 6 Nations campaign with a flourish.

The Scots finally ended their decade of failure against France with a 29-18 victory over Les Bleus at Murrayfield.

It was another impressive step forward for a team that had gone two years without a championship win before last month's victory over Italy in Rome.

But Laidlaw wants his men to banish the memories of nine straight defeats by extending their winning run to three matches when they take on Ireland in Dublin in next Saturday's closing clash.

He said: "We want to finish the tournament strongly next week but it will be a tough game.

"It's great for everyone - the players, the staff and the crowd - that we've managed to win, especially at home.

"It's a big stepping stone for this team. Against England we were disappointed in a few areas but then against Wales we weren't playing a bad team and only lost by four points.

"We were right in the hunt in these games. We only lost by six to England and they are close to winning a Grand Slam.

"I'm sure they appreciate we were not far away and in these last two games we have shown that by getting on the front foot and winning.

"We're not just happy winning two games though. We want to win three - with two away from home. That would be outstanding."

France and their muscle-bound team came to Murrayfield looking to throw not only their weight about but also the ball.

They scored an impressive try just five minutes in as a couple of offloads cut the Scots apart, leaving it to skipper Guilhem Guirado to score.

But Scotland responded with vigour. A couple of kicks from Laidlaw put them in front before Stuart Hogg danced his way over for Scotland's opening touchdown.

When Duncan Taylor scampered 50 yards down the touchline to add another, Scottish hopes of a first win over France since 2006 began to rise.

Gael Fickou did trim the lead back with a try right on half-time but the boot of Laidlaw and another score from Tim Visser with 13 minutes left kept the visitors at arms length.

The match was Laidlaw's 50th for Scotland and his 25th as captain - meaning he draws level with David Sole's record for appearances as skipper.

But the scrum-half was more pleased to see his team triumph.

"When you look back on your career one day, my 50th cap might seem more special because we won but right now it's about the team," he said.

"I'm just more happy that we've won the game rather it being my 50th cap.

"I felt the game was swinging our way as we got a foothold. We knew France would come and try to steamroller us.

"But I thought we fronted up and I really felt we finished the stronger team. We were probably fitter in the closing stages and it showed.

"We defended well at times when we needed to but the fact we put away three tries is another big bonus for us as a team.

"Hoggy's try was a team effort and a great finish. He showed great composure just to hold the ball. Duncy Taylor then came up with a bit of brilliance to burst down the line and score.

"We maybe got a bit of luck with Tim's try but we're very pleased."

Scotland lost Finn Russell after a sickening head injury just moments after kick-off but head coach Vern Cotter hopes to have him back in time for their jaunt across the Irish Sea.

But the Kiwi was delighted with how his side responded to the stand-off's loss.

"To lose our play-maker and then a try within five minutes but come back, show composure, build the game and win the game was great.

"We showed a lot of qualities and I'm really pleased for the players. They worked hard. It wasn't perfect but they put the necessary effort in and played to their strengths.

"There was a lot of energy out on the park and a lot of it came from the supporters.

"It's good to be able to win the game in front of our home crowd. Ten years is a long time.

"But the players were focused the whole way through. There was a lot of good things tactically and technically on the paddock but there was good character as well. That was important to get us through.

"We also showed composure at critical times because the French had us under pressure and we managed to get more points on the board."