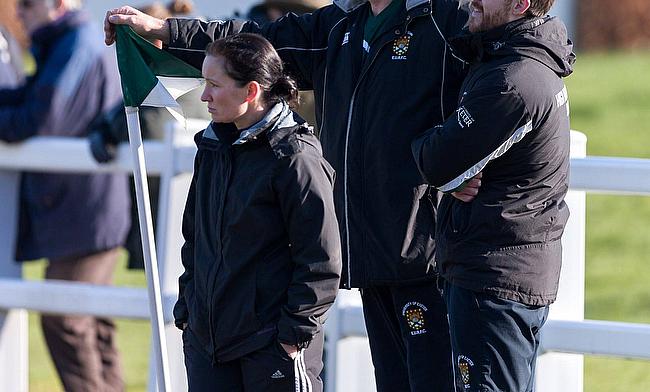 Emma Sing Exclusive: “Every opportunity I get I try to take it with two hands”
Exclusive: England’s Holly Aitchison on becoming a Red Roses regular
Wales’ Cerys Hale nearly quit last year - Now she is “enjoying rugby more than ever”
Flo Long Exclusive: “My mum is the kindest person and the rugby community is being really supportive”

For Jo Yapp, a week off is never quite that. With just over a week to go until her team’s Allianz Premier 15s Cup semi-final with Harlequins, the former England international picks up the phone in the middle of lambing, with there being a distinct possibility of suddenly having to end the call to welcome a new life to the family farm at any moment.

Luckily it never quite comes to that. In Cleehill, it is bright but with a chill in the air, the fairly stunning views of south Shropshire familiar to Yapp, who moved back to the Midlands after her time with the University of Exeter came to a close.

Worcester is a 45-minute drive away, something that is not new news, the city more than known to the scrum-half turned coach, who played her rugby there for the entirety of her career and having studied at the University of Worcester also.

It has been two and a half years since her return, initially as Skills Coach before becoming Worcester Warriors Women’s Director of Rugby shortly after and trying to change the fortunes of a team that had flattered to deceive since the introduction of the Allianz Premier 15s in 2017.

It was never as if the talent wasn’t available at Sixways, established England internationals Lydia Thompson and Laura Keates having been a part of the team since the outset.

With plenty of young players coming through the ranks, Yapps’ job has been to create a firmer pathway and reinforce the inner workings of the programme.

“We are pleased with the progress off-field and the support we can give the players, which was the main thing when I started; making sure that the players we have got were supported properly,” Yapp told TRU.

“That was making sure we had the right staff in place, like medical, S&C, coaching and some of the other support around nutrition, and we have got a sports psych in now.

Having played in Canada for the past year, @EnglandRugby international @caitymattinson will be joining @WorcsWarriorsW for the 2020/21 season.

“That was really important to me, that we supported them, because we have got a really good, young group of players.

“We were quite careful with our recruitment, because the players we have got were really good, young players and I wanted to continue to work with and develop them, whilst making sure we were continuing to become competitive on-field, and we have.”

Taking on the Director of Rugby role in late-2019, Yapp’s introduction to Premier 15s life certainly came at an interesting time.

With an audit around the corner to see if Warriors would keep their place in the competition, and then a global pandemic, it was by no means easy going.

But despite all the pitfalls of a global pandemic, limited time with players heading into a first full campaign in charge of the club, Yapp laid the foundations to keep players getting game time.

Some of this was as a result of the Premier 15s’ development league having been scrapped, Yapp making the short walk to Worcester RFC from Sixways, where the 42-year-old had played the majority of her senior rugby before Warriors waded in.

There, Yapp struck an agreement for numerous Warriors players to be dual-registered at Westons Fields. It has been a fruitful allegiance so far, with Worcester Women having gained promotion from Women’s Championship Midlands 2 this campaign.

In addition to this, Warriors Women aligned with Hereford Sixth Form College to give promising 16-18-year-old players the opportunity to achieve a Diploma in Sporting Excellence (DISE).

Add to this a long-standing relationship with the University of Worcester, which is yet another avenue for developing players to pick up game time alongside their Warriors commitments, means that players are never without minutes on the field.

It is an equation that has proven its weight in gold as the Premeir 15s has moved into its cup competition during the TikTok Women’s Six Nations.

This weekend, Worcester will make a trip to Surrey Sports Park to take on Harlequins in the semi-final of that competition, a just reward for plenty to impress their value to their Director of Rugby after months of hard work.

“Some of these players haven’t had much of an opportunity in AP, so they need competitive and having been able to get to this point is fantastic for them,” Yapp said.

Our Centre of Excellence headed up by @Benedicte_W continues to produce talent such as @evieengland_ who scored this stunning try during yesterday's Allianz Cup victory at @LightningRugby ??#WomensRugby #Development pic.twitter.com/3CHA8c7Bpn

“We had a really challenging game against Loughborough, where we ended up going behind, but they worked it out, they problem solved and they found a way to win.

“It wasn’t always pretty, but it is that development they need. To go up against Quins away is going to be tough, we know they are a hugely established side, but I am excited for those girls, to see what they can do.”

But before a trip down the motorway, contending with Easter travel to take on Gerard Mullen’s Quins, right in Yapp’s backyard university rugby will be hosted at Sixways.

For many years, Yapp was the mastermind behind the University of Exeter’s women’s side, ending her tenure at Topsham with back-to-back BUCS Championship’s titles, alongside coaching the England Women’s U20s setup.

Whilst in Devon, Yapp’s teams featured England internationals in the form of Lagi Tuima, Poppy Leitch and Clara Nielson, whilst Caity Mattinson was capped for England, but has recently switched allegiances to Scotland whilst excelling at Sixways.

“I absolutely loved my time at Exeter Uni,” Yapp said. “It allowed me to develop as a coach, I had players that were full internationals and players that had never played before, and that as a coach is a massive challenge.

“They [Exeter] really supported me, and they were such an amazing group of girls. That didn’t come overnight either.

“It took a few years to really develop and embed that programme, to the point where we had two or three teams going out at times to develop that depth.

“I was supported by Keith Fleming when I was there, and he has been around university sport for a long time, so having his knowledge to support me was invaluable.

“In both of those finals, I don’t think we were ever thought to beat Hartpury in that one year, because they were massively loaded that year with Sarah Bern and Katie Smith.

“The way we [Exeter], and they were so supportive of one another, they were so close as a group over that couple of years. They were just an absolute pleasure to coach.”

Wednesday in the West Midlands will not only provide Yapp with an opportunity to take a look at the next generation of Premier 15s regulars and potential internationals in the women’s game, it will also be an opportunity to see the likes of Fleming who will be bringing Exeter’s First XV to contend with Durham University for silverware.

Having called the southwest home for the better part of 10 years before moving back to the Midlands, Yapp will no doubt be hoping to see those in green and white hoist a trophy over their heads at the conclusion of the 80 minutes.

It will also be the first time that the BUCS Women’s National League will have been completed following its introduction in 2019. With the University of Edinburgh and Hartpury going toe-to-toe, Yapp believes that the game will provide invaluable experience for those likely to push for furth honours in the years to come.

“It is a massive experience, isn’t it, playing in any final,” Yapp said. “I think because they are young, players have to step up and lead and that is a skill in itself.

“They might be at Prem clubs where they get led by other senior players there, but university sport can be a massive opportunity.

“Playing in that Final and having that showcase – you can see from our final how many girls have actually kicked on and got places in APs, some after starting to play rugby for the first time and carrying on after.

“It is a massive opportunity, and I am sure a lot of them will be a lot stronger for it and will be really successful.”