“He made you feel ten feet tall": Tom Smith was a quiet, humble legend and the ultimate team player 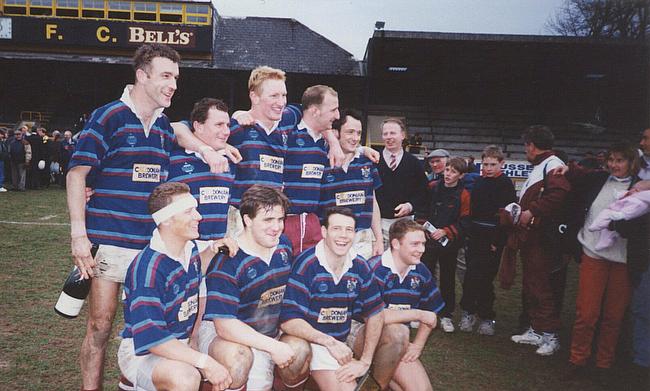 'Stuart Hogg will find it very hard to hold on to the captaincy' - Craig Chalmers
Can Blair be the King in Dublin? The talking points for Scottish fans ahead of ‘Super Saturday’
The inside story of how determined and diligent Darge made it to the big time
Schoolboy Norrie learning all the time and has Fagerson for inspiration

This weekend, the famous Melrose Sevens event returns for the first time since 2019 and although top players such as Cecil Afrika and Collins Injera are set to be involved, there will only be one name on all supporters’ lips at The Greenyards.

That name will be Tom Smith after the Scotland and British & Irish Lions legend passed away aged just 50 on Wednesday having battled cancer for the last few years.

Smith would burst onto the international scene in 1997 when he earned his first three Scotland caps in that year’s Five Nations and was then called up by coaches Ian McGeechan and Jim Telfer for the Lions tour of South Africa later that year.

Many pundits at the time saw it as a leftfield selection, after all, he had only just dipped his toe into international rugby, but McGeechan and Telfer know a player when they see one and they knew this loosehead prop could punch above his weight on the biggest stage of all.

He was never the biggest player, but what he lacked in size he made up for in skill, footwork and bloody single-mindedness and many believe he changed the way looseheads play the game.

On that South African tour, he was one of the star men, starting all three Tests as the visitors secured a famous 2-1 series victory.

It has been confirmed by @Melrose7s organisers - via @MelroseRugby president Douglas Brown - that there will be a tribute to ex-@Scotlandteam + @lionsofficial prop Tom Smith, who passed away aged 50, before the final on Saturday...

He also played in all three Tests on the 2001 tour to Australia and finished up with 61 Scotland caps, representing his country at two World Cups and having a fine professional club career with Glasgow Caledonia, Brive and Northampton Saints.

Before that, he had played club rugby for Dundee HSFP - after attending Rannoch School - and Watsonians while he also represented the Caledonia Reds as Scotland was getting to grips with full-time professional rugby in the mid-1990s.

It was while playing for Edinburgh-based club Watsonians at the Melrose Sevens in 1995 that Telfer first spotted Smith and thought he could go on to great things.

Twelve months later, Smith would win the same sevens tournament with Watsonians in a squad that included others who had, or went on to earn full Scotland XVs caps, in the shape of Scott Hastings, Cammy Mather, Duncan Hodge and Grant McKelvey. He also toured New Zealand with Scotland that summer.

And 26 years on and just days after Smith’s death shocked the Scottish rugby family and the wider rugby community, the Melrose Sevens takes place this Saturday and Smith will be remembered before the final on Saturday evening.

Melrose president, Douglas Brown said: “Our thoughts and prayers are with Tom’s family at this incredibly sad time.

“He was a huge part of the rugby family and we will be paying tribute to this great man before the final at this year’s Melrose Sevens.”

The revamped four-day festival of rugby in the Borders town where sevens was invented began on Thursday night with a Hall of Fame Dinner and at that event, Scottish Rugby chairman John Jeffrey told the crowd: “Scottish rugby has lost not only one of its greatest players but more importantly one of its greatest people.

“Tom embodied everything we like to espouse about our great game.

“Pound for pound, he probably was Scotland’s greatest international. Tom was without a doubt the most humble person I have ever met and all of Scottish Rugby’s thoughts go out to his family and friends.”

After his playing days, Smith was an assistant coach at Edinburgh Rugby between 2009 and 2012, before taking on a coaching role at Lyon. His family still live in the Lot-et-Garonne region of southern France.

And, indeed, it is his family we are all thinking of most at these times.

His wife Zoe and children Angus, Amelie and Teddy have lost their hero and one of the most poignant moments seen at BT Murrayfield in recent years came last November when Smith and his kids presented the match ball ahead of the Scotland-South Africa Test match.

That will live long in the memory, but it said everything about Tom Smith that he was sheepish about being in the limelight.

His successes on the rugby field were never about him but were always about the team.

He was not a ranter and raver, he just went about his job efficiently game after game for whichever team he was playing for, but boy did the quiet man make an impact.

The tributes to Smith have been pouring in from across the globe in recent days. Scottish cap centurion Chris Paterson, a former teammate, said of Smith: “Tom was simply inspirational.

“He was someone who had an aura that I didn’t experience with any other player and commanded instant respect. As well as being a wonderful rugby player, he was a lovely, warm generous person and made you feel ten feet tall when he spoke to you.”

Kenny Logan, another former Scotland teammate, tweeted: “It’s taken me a while to find the words. I still can’t. Quite simply I am broken-hearted.

Current Scotland head coach Gregor Townsend said: "Tom was one of the toughest and most skilful players I had the pleasure to call a teammate.

"He succeeded in the most challenging of environments and kept up a high level of play well into his thirties. Tom also did a tremendous amount for charitable causes and was a great family man.

“I am convinced that he will be regarded as one of our best ever players and his loss will be felt by all those who played with him or watched him for club and country over the years.”