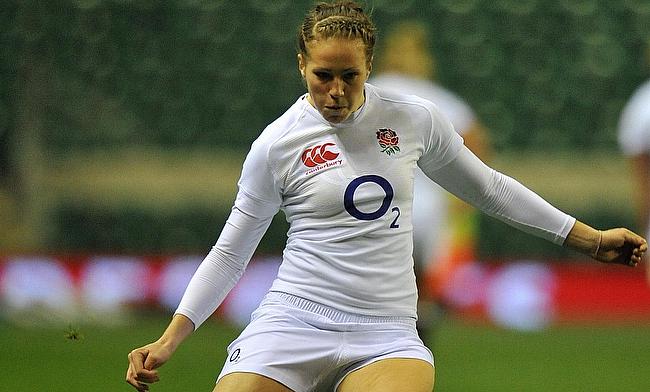 Emily Scarratt was one of England's try scorer
©PA

TikTok Women's Six Nations Round 1 - Wrap Up
Women's rugby has shone over the last 12 months so what can the game achieve in 2022?

The second round of the Tik Tok Women's Six Nations saw France, England and Wales maintain their winning run while Ireland, Scotland and Italy are still in search for their first victory.

Laure Sansus scored a double as France trounced Ireland 40-5 in their clash at Stade Ernest-Wallon. This is second win for France in as many games as they are at second place in the table while Ireland are at fifth position.

Caroline Drouin slotted a three-pointer in the third minute to start the proceedings for France after skipper Gaëlle Hermet won a penalty. The home side extended their lead further as Mélissande Llorens went past Eimear Considine to dive in the corner and Sansus followed the suit and darted over the right in the 23rd minute.

Drouin missed the conversion on both the occasion but France still were dominant with a 16-0 lead. The third try came in the half-hour mark as Audrey Forlani dotted down at the back of a rolling maul and the bonus point came inside the opening half as Clara Joyeux also went over after good work from Cyrielle Banet as they headed into the break with a 26-0 lead.

France extended their momentum into the second half as Sansus dived at the back of a powerful scrum to complete her second try in the 46th minute before the only response from Ireland coming through a touchdown from Eve Higgins in the 55th minute to make it 33-5. France came back, spending a long spell in the Ireland 22 and in the end pouncing on an error from the visitors as Maëlle Filopon put Émilie Boulard over for their sixth.

Ffion Lewis scored a try in the closing stage as Wales maintained their winning start with a 24-19 win over Scotland at Cardiff Arms Park.

The opening quarter saw Lana Skeldon and Carys Phillips exchange tries as the scores were levelled 7-7. Rhona Lloyd pounced on a kick from Jenny Maxwell to touchdown before Helen Nelson kicked the conversion to provide Scotland a seven-point lead by the 33rd minute. As the break was approaching, Wales were down to 14 players temporarily as Kerin Lake, penalised for not rolling away.

Lloyd with her second in the 41st minute extended Scotland's lead to 12 points but Wales clawed their way back into the game with tries from Sioned Harries and Kelsey Jones in the 45th and 63rd minutes respectively to level the scores 19-19 after Leah Bartlett was sin-binned for repeated infringements. The decisive blow came in the 75th minute as Alisha Butcher created the space for Ffion Lewis to dot down as Wales sealed a thrilling win.

Lydia Thompson scored a hat-trick while Sarah McKenna came up with a double as England ran a 12-try riot to blank Italy 74-0. England got off to a flying start as Natasha Hunt fed McKenna for the opening try in the third minute before Helena Rowland’s pass allowed Thompson for a touchdown in the 14th minute.

The end of the opening quarter saw Lark Davies dived unopposed at the back of a powerful rolling maul and seven minutes later Shaunagh Brown crashed over as Simon Middleton's team claimed the bonus point. England went on to increase their tally to 31 points in the opening half as Alex Matthews powered over from close range.

England looked dominant from the outset in the second half as McKenna’s delayed pass allowed Thompson to crossover in the 41st minute before Vicky Fleetwood also went over at the back of a rolling maul to make it 0-41. Sarah Bern announced her arrival onto the field immediately by running in a cracking try from the halfway line after Hunt found her with a flick out the back door having capitalised upon an overthrown Italy lineout.

England's tally went past the 50-point mark as Emma Sing crossed over for her second try with Emily Scarratt also getting her name in the scoring sheet to make it 0-62. As Italy struggled to make impact, they were down to 14 players temporarily in the final 10 minutes with Beatrice Rigoni sin-binned as McKenna and Thompson scored further tries with the red rose team completing a 74-point victory.