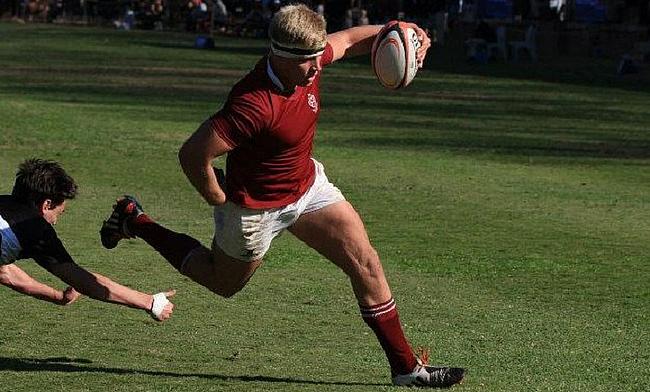 Scotland announce 36-man training squad for autumn internationals
Young Warrior Cunningham has shown patience, now the stand-off is ready to kick on
Gran “over the moon” that Bayliss has chosen to play for Scots
From Dumfries to the Rainbow Cup: Level-headed Currie out to make his mark

Dylan Richardson’s “passion and drive” are among the qualities that have helped earn the South African-reared 22-year-old a shock Scotland call-up - and those who know him well believe he will make the most of the opportunity with Gregor Townsend’s men.

Back-row Richardson, who can also play hooker, travelled from Cardiff to Edinburgh on Sunday morning to meet up with head coach Townsend, his coaching staff and the rest of the current 36-man training squad as preparations for the upcoming Autumn Nations Series begins.

On Saturday night, he played for nearly an hour for the Cell C Sharks against the Blues in the Welsh capital in a United Rugby Championship match and there is no doubt that, whilst on the journey north on Sunday, he would have tried to reflect and take in what has gone on in recent days.

Eligible for Scotland through his father, Richardson was the real surprise name in Townsend’s pool of players asked to gather at Oriam on the outskirts of Edinburgh on Sunday and Monday.

So, what kind of player have Scotland managed to get their hands on?

One man who knows him better than most is Kearsney College First XV Coach and Director of Rugby Barend Steyn.

Congratulations to our powerhouse loose-forward, Dylan Richardson, on your inclusion in the Scotland National team ?? We are so proud of you! ??#OurSharksForever pic.twitter.com/HhAyhniB7Q

He worked with Richardson at the school situated in Botha’s Hill, a small town between Pietermaritzburg and Durban in South Africa, as the player was making waves in his teens.

“Dylan always showed great potential and his total commitment and willingness to constantly improve his physical conditioning and skill set made him a player who progressively improved year on year while he was with us at the school,” Steyn said.

“He was always prepared to do the extra work after training and he represented the Sharks at under-13, under-16 and under-18 levels and then was picked for the South Africa Schools team in 2017.

“That was the same year that he captained the school’s first XV and he is an intelligent rugby player with good leadership abilities. His understanding of the game from an early age and his desire to understand his positional roles and responsibilities on the pitch have made him the versatile player that he is now.

“He could play any position with great effectiveness and ease. At school, we mostly used him as a No.8 where he could use his vision and carrying ability in every game.

“Indeed, he smashed the school record for the most tries scored by an individual in one season, a record that had stood for 21 years. That record of 22 tries still stands to this day and overall in his final two years at Kearsney, he amassed 38 tries in 33 matches - quite remarkable.”

Steyn is delighted to see former South Africa under-20 cap Richardson - who played for the Sharks versus the British and Irish Lions in the summer - getting a chance to show what he can do with Scotland, but he admits there is a tinge of sadness too because he believes he has it in him to become a Springbok.

“I feel he could have played in the green and gold of South Africa post- Rugby World Cup 2023 when he will be in the prime of his playing career, but when chances come in life, you have to grab them,” Steyn states.

“Dylan is a great talent with a real passion and drive for the sport and he is still a very young man. I don’t think we’ve seen the best of him as yet and that is exciting.

“His successes does not come as a surprise at all to me and certainly he is very deserving of playing for the Cell C Sharks and maybe Scotland.

“I know he will make a success of this opportunity and I wish him only the best and an injury-free career that I will continue to follow with immense pride.”

The squad that is currently meeting is without English and French stars and Townsend is to name an updated team for the Autumn programme - which starts versus Tonga at BT Murrayfield on October 30 - on Wednesday.

Whether Richardson makes the cut remains to be seen, but given that there are several uncapped players already with Scotland and 12 of the players are aged under 23, the next few weeks will certainly see some new talent getting a chance with the national team.