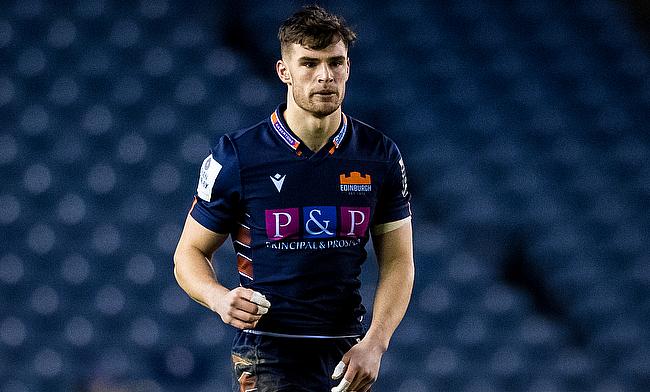 As well as watching a number of innovative law variations unfold, there is also likely to be the chance to see up-and-coming youngsters playing for several clubs when the Guinness PRO14 Rainbow Cup begins this weekend.

With some top-level players battered and bruised from a constant club and international season which began as far back as last summer, Edinburgh Rugby are certainly one of the participants who have hinted that they will use the new-look competition to blood fringe players with an eye on increasing their squad depth for 2021/22.

The event includes the PRO14 clubs plus South African franchises the Stormers, the Sharks, the Bulls and the Lions.

Richard Cockerill’s Edinburgh begin their campaign at home to Zebre on Friday evening, and centre Matthew Currie is one of the Scottish capital club’s Stage Three Academy players who looks set to get some game time.

To date, the 20-year-old from Dumfries has come off the bench against Munster and the Dragons in the last couple of months and has shown glimpses of why many rate him so highly.

Indeed, he was also asked to train with the Scotland squad during the Six Nations to gain valuable experience along with a handful of other players who those within Scottish Rugby have earmarked for good things in the next few years.

He certainly has a mature head on his shoulders and Tom Neill, who coached Currie when he played in the Mini rugby section at Dumfries Saints a number of years ago, told TRU: “You knew from an early age that Matthew was going to go on and be a good player. He just had that awareness about the pitch that other youngsters didn’t have.

“He also seemed to be where he needed to be in attack and defence and he was never scared to make a tackle and he certainly didn’t shirk his responsibilities. Sometimes he would make a tackle and then be straight back up to make another tackle and you could just tell that he had a good rugby brain.

“It was myself, Matthew’s Dad, Alan, and Fraser McMaster who coached that age group and it was great fun and Matt always just had that spark in his play which set him apart.

“I am really pleased to have watched what he has gone on to do in his rugby and I know he is the kind of character who will never get too carried away. He will just keep working hard and that will stand him in good stead.”

“We found him very coachable and a great team player”

If Currie’s rugby journey started at Dumfries Saints, then it flourished at Merchiston Castle School in Edinburgh.

He was there for much of his senior school years before leaving in the summer of 2019 and he came through the system with prop Dan Gamble and scrum-half Jamie Dobie, both of whom are making their way in the pro ranks with Edinburgh and Glasgow Warriors, respectively.

“He is the best I have seen in schoolboy rugby when it came to reading defences and he ran beautiful attacking lines. He made many a try in the 2018/19 season. He was also ‘Mr Consistent’ and very rarely made an error.

“Defending in the 13 channel is never easy, however, he was always learning and asking questions on how to improve within the role. He matured into this job and became an excellent defender in space, which again is not an easy skill.

“Over the years at school, he worked extremely hard off the field with Iain Noble and developed into an outstanding athlete through our S & C programme.

“We found him very coachable and a great team player. He was always very humble and constantly played down his influential contributions. He was the glue within our cup winning team of 2018/19.”

As Deans mentioned, Currie helped Merchiston win the Scottish Schools under-18 Cup in 2018/19 and by then, he was also a key part of the Scotland under-18 team.

During 2019/20, he was linked with Edinburgh while also playing for Watsonians in the FOSROC Super6 competition and for Scotland under-20s in the Six Nations.

A couple of injuries and then the pandemic made that a bit of a ‘stop-start’ campaign for him, but it was clear to all who saw him in that time that there was a serious player there.

In 2020/21, with game time options elsewhere limited due to lockdowns and the like, the Stage Three Academy players have been more closely aligned to Edinburgh and Glasgow than ever before.

It wasn't to be for @EdinburghRugby tonight, going down 22-10 at home to @Munsterrugby, but it was brilliant to see centre @MatthewCurrie14 - a member of the club's @Super6Rugby squad in 2019/20 - come on for his pro debut in the @PRO14Official aged 19, all at Myreside are proud! pic.twitter.com/PcLbawYfFp

“The Academy has been a lot better this season - we’ve been in full-time,” Currie, who turned 20 in February and is still eligible for this summer’s age-grade Six Nations if needed, explains.

“We’ve just been fully immersed in the environment and I think a lot of the boys would say we’ve learned a lot this year.

“I got 10 minutes against Munster then a bit more against Dragons. I hope the Rainbow Cup is an opportunity for a few young boys to get a run.

“Cockers will give me advice and tell me what my ‘work-ons’ are and he’s told me it’s up to me to put my hand up for selection. He has said just do everything you can in training to get a foot in the door and take that opportunity if it comes.”

Edinburgh Rugby v Zebre in the Guinness PRO14 Rainbow Cup kicks off at 8.15pm on Friday at BT Murrayfield and is live on Premier Sports.