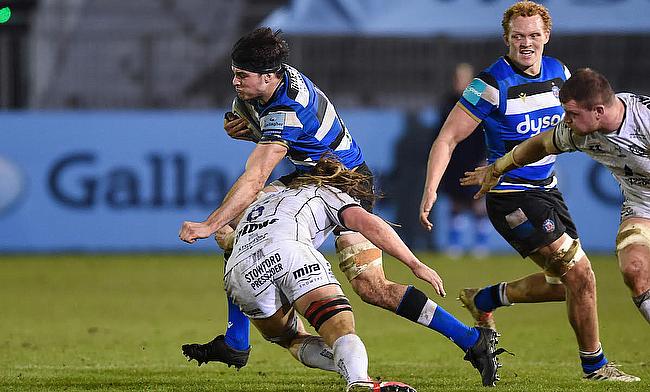 Scotland head coach Gregor Townsend is well known for surprising the Scottish rugby media with one or two of his selections - and it is fair to say that when Bath back-row Josh Bayliss was called-up during the Six Nations it came from left field.

It wasn’t that we did not know that the 23-year-old was a good player, it was more the fact that most did not know he was eligible to play for the Scots having grown up in Indonesia and England and having played his age-grade rugby for the latter.

However, his grandmother Frances Bayliss hails from Aberdeen originally and that link saw him brought into the squad for the France match.

In the end that game was postponed due to an outbreak of Covid in the French squad while Bayliss went back to Bath and received a concussion soon after.

As a result, he is still uncapped, but looks set to play for Scotland ‘A’ this weekend against their English counterparts in Leicester.

And if he does play in Sunday’s game then he will be ‘tied’ to the Scots and could then earn first full caps against Romania and Georgia in July.

“My gran was obviously delighted and over the moon that I had chosen Scotland and she was one of the first people I called when I got the call-up, she was absolutely delighted,” Bayliss told TRU from the Scotland base in Edinburgh this week.

“I qualify through her. I was always aware of my Scottish heritage, but international rugby wasn't on my horizons I guess, being at Bath with the quality of back-rowers that we have at the club there is a lot of competition for places each week, so I was just battling away there and it was a complete surprise to get the call from Gregor, but a really good surprise.

"Gregor got in contact with me around the Six Nations time and it sounded like a great opportunity for me. As soon as I came into camp I felt comfortable and definitely felt like I'd made the right decision.

"I am not entirely sure [how Scotland knew of his roots].

“Cam [Redpath, his Bath team mate who has one Scotland cap] may have mentioned something when he came up because we are quite close and I know when Cam was sort of deliberating and deciding what to do [choosing between Scotland and England] we spoke quite a lot and I guess I mentioned to him that my grandmother was born in Aberdeen, so I am not sure if he said something. I don't know the concrete answer to that.

“Further down the line I spoke to Cam and he told me about the camp and told me that he loved the environment and the brand of rugby that Scotland are looking to play and it all just seemed like something that would suit my game.

“It wasn't really a difficult decision with all of that considered, I saw it as a massive opportunity for me and I thought I'd regret it if I didn't take it, so it was an easy decision for me.”

The Scotland ‘A’ matchday squad is set to be named on Friday lunchtime.

Josh’s journey via Indonesia and Millfield

Having been born in Devon, Bayliss grew up in Indonesia as a result of his father’s job before he moved to England aged six or seven and attended Wellington School in Somerset and then headed to Millfield School in the same county.

“Josh is an outstanding character and he gave 100% to everything that he did academically and in terms of sport,” Millfield director of rugby John Mallett said earlier this year.

“While he was at school Josh was very much someone who got involved in a number of different sports and he played cricket to a good level and was good at a number of athletics events.

??? "Josh is an outstanding character"

Want to find out more about @Scotlandteam new boy @joshbayliss8? Look no further...

“Ever since he left school to get further immersed in the Bath Academy system and then sign a pro deal with Bath, Josh has always come back to the school to talk to kids and help out at rugby camps when he has been available and that is inspiring to the next generation.

“We wish him well on the next part of his journey with Scotland we would be very proud to see him earn full international honours.”

The England under-20s team that Bayliss was a key part of back in 2017 won a Grand Slam and reached the final of the World Championship before losing out to New Zealand in Georgia.

Bayliss scored a try in the 64-17 reverse by the Baby Blacks and since then his career has gone from strength-to-strength.

On Sunday he could well come up against a lot of familiar faces in the England ‘A’ ranks and the man himself added:  “There are a lot of Bath guys in there so it would be pretty weird if I was selected, but it would be a massively exciting opportunity to go out there and play against guys who I play with and against week in, week out in the Premiership.

“My dad is actually back home [from his base in Borneo] at the moment so fingers crossed he’ll be able to get there. If selected, hopefully my mother, dad and my sister will be there, which will be pretty special.

“The whole Scotland group that is training just now is incredibly exciting. There’s a whole mix of really young guys and guys that have experienced a lot of rugby at the highest level, it’s honestly been a great week and a half of training.

“A lot of hard work has gone in and I can’t wait for the boys to showcase what we can do in the upcoming games.”