The Cardiff Met pathway which is continuing to thrive 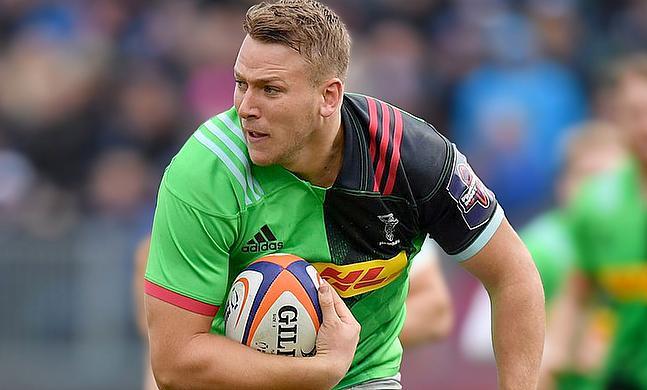 After retiring from England duty 10 months ago, Joe Marler reversed his decision to end his international career and the prop is now firmly part of Eddie Jones’ plans for Japan.

In truth, Marler’s club, Harlequins, also dominated the key talking points. Whilst the 29-year-old was selected by Jones, team-mates Chris Robshaw, Danny Care and Mike Brown missed the cut. The aforementioned trio have a combined total of 222 caps between them, but at the opposite end of the ‘experience’ scale was also another Quins man; Alex Dombrandt.

After graduating from Cardiff Met University last summer, the back-row burst on to the scene at the Stoop and he certainly made an impact in his first season of professional rugby as he claimed Harlequins' Players' Player and Supporters Player of the Season awards.

His high-octane performances in the Gallagher Premiership earnt him a place in the England set-up for the first time. He featured against the Barbarians at the start of June and Dombrandt was also involved in the wider World Cup training squad.

One of the breakout stars of 2019 Alex Dombrandt has been pulling up trees domestically ??

The @Harlequins bulldozer will get a chance to impress all of us in the #Heineken #ChampionsCup next campaign ??

However, like some of his fellow Quins compatriots, Dombrandt wasn’t picked by Jones but the grounded 22-year-old continues to look at the bigger picture: “It was an unbelievable experience to top off my first season”, Dombrandt tells TRU.

“Obviously you want to play at the highest level, but if nothing materialises in the near future, I will go back to Quins. A lot of things can happen in the next few weeks so we will just wait and see and take it week by week.”

The forward also reveals he never expected the 2018/19 season to go the way it has done and he admits he even surprised himself with how quickly he found his feet at Quins.

Fifteen months ago, Dombrandt captained a Cardiff Met side who so nearly clinched the biggest prize in university rugby at Twickenham, but despite a valiant fightback, they fell just short.

Arguably, the Welsh university reached the BUCS Super Rugby final against all the odds and pre-season predications after finishing in seventh place in 2016/17, but it seems one of Cardiff Met’s most successful campaigns has sparked a player pathway which is now thriving.

Since the introduction of BUCS Super Rugby three years ago, the rise of the university game has been remarkable and Cardiff Met’s progress embodies everything positive about this particular level of rugby.

With the foundations of their programme laid by Chris Davey, current Director of Rugby Danny Milton – alongside coach Ian Gardner - have continued to build on the philosophy of developing holistic athletes by balancing a high-class education with high performance rugby.

“It is a testament to Chris Davey who was here before me,” Danny Milton says. “It hasn’t just happened overnight. You think back to the likes of Jack Yeandle who is at Exeter Chiefs as well as Dan Bibby and Richard de Carpentier who have been involved with the England 7s programme. This hasn’t just materialised over the last couple of years, it is something which has been going on for a long period of time.

“I also do think with the introduction of BUCS Super Rugby, what it has really done is throw the limelight onto all of the university rugby programmes which has helped with full-time contracts. If you are playing in the top end of BUCS Super Rugby and playing well, you have got a good chance of picking up a contract now which is great for us and it is great to see that alternative pathway.”

Whilst Milton was quick to highlight the work which has been done in the past, it feels as if Dombrandt’s move to Quins last year opened up another viable avenue for players. Close friend and BUCS Super Rugby Player of the Year Luke Northmore will link up with his former team-mate at the Stoop in 2019/20 while fellow Archers Edoardo Balocco and Andrew Nurse have experienced the Quins environment over the last 12 months.

The second-tier of English rugby has also seen the arrival of some Cardiff Met players. Ben Williams and George Simpson moved to Ealing last summer and this year, Tom Benjamin has joined Nottingham whilst Jac Arthur will be plying his trade for Ampthill and District as the next phase of their respective journeys begin.

“I’ll be the first to admit that, I will forever be indebted to the university and my coaches” says Dombrandt. "I don't think I would be where I am without them.

A great opportunity to complete your academic studies whilst being part of one of the leading university rugby programmes in the UK @cardiffmetrfc #NoBrainer https://t.co/0cBk4fsDbg

“You only have to look at Cardiff Met, as well as the strength & conditioning side and the analysis side, to see how professional it is. It definitely helps to be involved in such a high-performance set-up because you are able to push yourself forward and it allows you to get in the best possible position for progression into the professional game.”

Dombrandt’s respect for his old university was highlighted when he attended a Youth Cup Final to support Cardiff Met. He was also joined by current Welsh international and ex- student Aaron Wainwright who presented shirts to the players before the match.

Milton was full of praise for Wainwright after Wales secured the Six Nations Grand Slam earlier this year and the Dragons back-rower now harbours hopes of playing in a World Cup. For Dombrandt, his sensational debut season may not continue onto Japan, but his former Director of Rugby is proud of one of Cardiff Met’s leading success stories.

“We’re certainly not disappointed he wasn’t selected and I certainly don’t think he should be!” says Milton. “Don’t get me wrong, if his England journey was to continue with him going to the World Cup, that would have been fantastic, but I think you have to look at the bigger picture.

“What this does really allows him to get to grips with Quins and get himself in good shape. There is always that fear of second-year syndrome but he will get a good run in in pre-season to make sure he establishes himself in this Quins team.

“If Alex plays anywhere near like he has done this year, that will increase his chances of England selection in the Six Nations and the aim then maybe the Lions in 2021. Something you thought would be ridiculous because he came out of university last year, you have to say is now a genuine pathway for him.”

For both Cardiff Met and Dombrandt, their reputations will stay on an upward trajectory. The university, which includes 10 teams, will maintain their focus on player development as well as aiming for honours while Dombrandt’s transition into senior rugby highlights not only his superb talent, but the pathway Cardiff Met and other universities are continuing to provide.