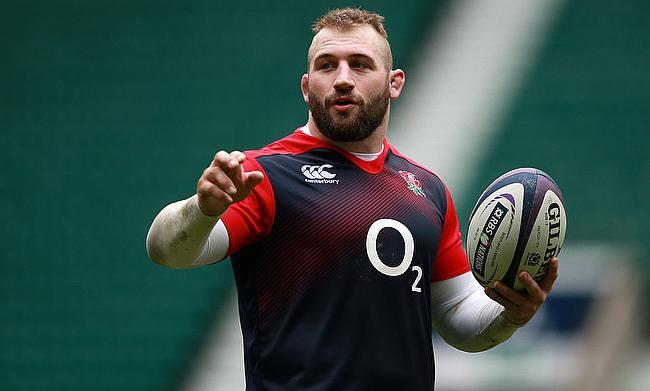 Joe Marler has come out of international retirement to be named in England’s Rugby World Cup training squad.

After announcing he would stop playing for England last September, the Harlequins prop has been included in Eddie Jones’ plans as preparations for the showpiece event in Japan start to crank up.

Speaking to the House of Rugby Podcast earlier in the year, Marler said 'never say never' when asked whether he would be open to a recall by Jones and now the foward finds himself invovled in another World Cup camp.

“We have kept in contact," Jones said. "It has not been an isolated conversation which has led to him coming back. He wants to comeback and compete for a spot and we are delighted to give him the opportunity to come back in and compete.

“He is one of the best props in the world. We saw that, particularly in the third Test against South Africa. He was absolutely outstanding. He played 80 minutes which is unusual for a front-rower these days, but he has now got plenty of competition."

Scrum-half Ben Youngs also feels Marler's decision to do a U-turn is because this is the best chance England have to win the World Cup.

Speaking at the Canterbury Clubhouse after the unveiling of England's new World Cup kits, Youngs said: I’ve done two World Cups before, and I don’t think I’ll ever feel as well prepared for a World Cup as I will this time around; physically, in complete knowledge of how we want to play.

“I’ve never felt an international side like I have under Eddie, in terms of that unit so for me, it will be a lot different, and it is exciting and I think that’s why someone like Joe has done a U-turn because he knows, he understands that unity that we have here. It’s great to have him in this environment."

What Marler's return to the squad also provides is a stong dosage of experience, espeically when you look at who Jones has left out.

Quins team-mates Mike Brown, Danny Care and Chris Robshaw have not been selected as England, seemingly, look to take a step away from the old-guard. Dylan Hartley (97 caps) has also missed out with Jones declaring he will keep an eye on the hooker's progress as he continues his recover from injury.

Jones said: "We have had four years to pick a squad for the World Cup. We are going to name our final 31 on August 12th. We have obviously got a good idea of where we are and we need to see some competition in some places, but we need the squad that has got the skill, experience and collective desire to win the World Cup.

“I never see selection as a gamble. There are some very good players that have been left out and I have spoken to all of those players individually. I think we have the squad here with enough experience to win the World Cup.”

Gloucester’s Danny Cipriani has made the cut as has Bath’s Ruaridh McConnochie after an impressive debut season in the Gallagher Premiership, but Alex Dombrandt (Harlequins) and Wasps' Dan Robson have been left out.

Jones added: "The great thing for us is that we’ve had a couple of young guys come through who we didn’t know a lot about, such as Ruaridh McConnochie and Lewis Ludlam.

"Those X-Factor players who come through late are an added bonus. They are like the extra present under the Christmas tree that you didn’t know about. That’s what makes it so exciting."