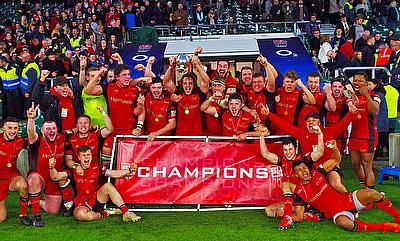 For the second year running, Hartpury have clinched the title at Twickenham
©Joe Harvey and TRU

Tries from Maliq Holden and Alex Forrester plus 10 points from the boot of Sam Leeming put Hartpury 20-3 up at half-time, but a trio of scores from Harry Seward, Aled Ward and Jac Arthur flipped the final on its head.

However, Hartpury camped themselves in Met’s 22 in the final 10 minutes of this contest and after it looked like the holders had missed their opportunity, Luke Stratford scored a dramatic try in the last play of the game to snatch the victory for Sean Lynn’s men.

It is now the second year on the spin that the Gloucestershire outfit have lifted silverware at Twickenham and their pedigree at university level continues to grow.

After a slow start to their title defence, following just one win in seven matches, Hartpury showed their character and class from November onwards to surge towards another trophy to add to the cabinet.

Following superb victories over Leeds Beckett and the University of Exeter in the knockout rounds, Hartpury delivered another clinical first half display, with Holden and Forrester profiting as Hartpury crossed on two occasions.

The Gloucestershire side also nullified Cardiff Met’s main weapons with Alex Dombrandt struggling to produce his explosive best in the first 40 as Leeming continued to add points to Hartpury’s total in an attritional opening period.

But, a penalty from Harry Johnston on the stroke of half-time kept Cardiff Met in touch with Hartpury and after the break; Danny Milton’s men produced a remarkable response.

Met had finished third in the domestic season and the Archers showed exactly why they have had such an impressive campaign in the first 20 minutes of the second period.

Cardiff Met had endured an underwhelming first half, but a combination of pace and power delivered their first score of the afternoon as Seward barged his way over from close range.

A knock-on from Hartpruy following the restart highlighted Met’s increased intensity and a devastating move from George Simpson and Max Llewellyn was halted by Hartpury captain Tom Pashley thanks to a brilliant last ditch tackle.

However, Met continued their pressure and Ward smashed across the line to bring the Welsh outfit to within three points of Hartpury.

Hartpury were unable to take the sting out of the game and just before the hour, they went behind as two exquisite offloads from Ward and Dombrandt allowed Arthur to round-off a fantastic score.

The game had turned on its head and Hartpury knew they had to compose themselves in the final 15 minutes of an encounter which had sparked into life.

Sean Lynn’s side did refocus and they started to apply pressure on the Met line. A yellow card to Seward left the Archers with their backs against the wall, but a decision by Hartpury to go for a scrum rather than the three points with Met down to 14-men looked to have cost them.

Met were able to turnover the ball on a couple of occasions, but they just couldn’t get down the field. Hartpury’s power up front kept the pressure on and eventually Met cracked.

The decisive moment came right at the end of a scintillating second half as Stratford, after being held up moments earlier, managed to dive under a crowd of bodies to clinch Twickenham glory for Hartpury.