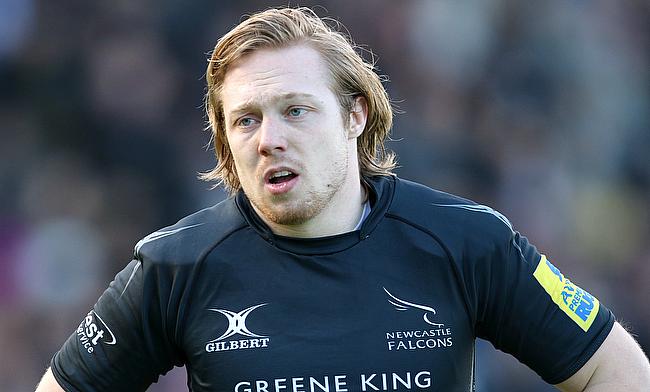 Newcastle Falcons fly-half Joel Hodgson believes the recent success of the club at Kingsholm will keep them in good stead when they face host Gloucester Rugby in the semi-final of the European Rugby Challenge Cup on Friday.

The two teams locked horns with each other at Kingsholm during their Aviva Premiership encounter at the start of the March and it was the Falcons, who edged out the Cherry and Whites with a 21-20 win and it was their second successive win at the venue.

The winner of the Friday's clash will either take on Cardiff Blues or Pau in the final and if Newcastle Falcons managed to beat Gloucester, it will be the first time they will feature in a European final and Hodgson knows what is at stake.

"Gloucester is a phenomenal place to go and play, and we enjoy it. We’ve won our last couple there in the league, we have had some good battles there and we know we have to be on top of our game to put away a good Gloucester side.

"They’re going really well at the moment, scoring tries for fun and we certainly have to front up in defence. When we do get the ball we need to keep hold of it, be accurate in what we do, and it’s nice in games like this not to have to think about playing for bonus points or home advantage.

"It’s a straight shoot-out, you just need one more point than the opposition and that’s certainly our mind-set going into it."

Newcastle Falcons won all six games of the group stage in the Challenge Cup that saw them top Pool 1 and also outplayed Brive with a 25-10 quarter-final victory. Even in the Aviva Premiership, they are positioned fourth in the table with 13 wins from 20 games and Hodgson, who is one of the most accurate kickers in the tournament is hoping to end the season well.

"It would be a great achievement for the club to reach our first ever European final, and we’re also right in that play-off mix in the Premiership," said Hodgson, the academy product who has made 105 appearances for the club over two spells.

"The business end of the season sees us alive in multiple competitions, and that was always the vision that Dean Richards and Semore Kurdi had for the club when they first came on board. We’re slowly implementing that plan, it’s no surprise to us how well we have gone this season but it’s still new to a lot of us.

"It’s great to be a Newcastle lad playing for a Falcons team who are doing so well, and I’m lucky to have great players everywhere I look here.

"The progress we have made has been a huge collective effort, everyone understands and buys into the game plan, and it’s not just a one-man show. Everyone has their part, and if they do that on Friday we’ll have another victory to enjoy. If we handle the occasion correctly I’ve no doubt we have what it takes."

The Friday's encounter will also be the first time the two clubs will meet in the Challenge Cup despite having played a combined 196 games in the competition.