Russell and Hogg can lead Scotland revival in 2020... with a little help from their friends 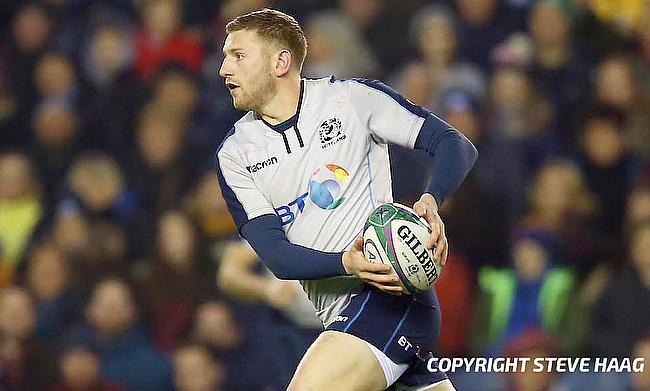 Former Scotland skipper John Barclay announces international retirement
Scotland and Lions legend Renwick: Hogg can sidestep his way back to top form
Scotland to face Argentina, Japan and New Zealand in 2020 autumn series
“We want the best young players to be challenged by the Super6”

Finn Russell and Stuart Hogg can be the catalysts for Scotland to improve in 2020, but they need the players around them to give them support to allow them to play with freedom, according to former full-back Glenn Metcalfe.

The Scottish team go into the new year on the back of a disappointing World Cup in Japan and with stalwarts John Barclay and Tommy Seymour having announced their retirements from the international game in recent days.

It does not look like getting easier in 2020 with the Six Nations followed by two Tests against World champions South Africa in July and one against New Zealand hot on their heels.

Autumn Tests have then been arranged against Argentina, Japan and the All Blacks again setting up a challenging 11 game run.

For Scotland to climb from their current world ranking of ninth by the end of 2020, two 27-year-olds will be very important: Racing 92 stand-off Russell and Exeter Chiefs full-back Hogg.

And Metcalfe, who earned 40 caps for Scotland between 1998 and 2003, believes the duo have the stardust to make Scotland tick - if their team mates back them up.

“Russell and Hogg are brilliant,” Metcalfe, told TRU in Edinburgh this week.

READ | @Tommy_Seymour14 signs off from Scotland.

“Playing for Scotland has been the greatest honour. The pride from wearing the thistle on my chest is one of the most powerful feelings I’ve experienced.” #AsOnehttps://t.co/TlFBdAgVPu

“However, it is not a one or two man game, they need to be given a little bit of support which will allow them the freedom to play their natural games a bit more in a Scotland shirt.

“Russell is magic, I tell a lot of my friends back in New Zealand that haven’t seen too much of him that he is one of the best 10s in the world. He has got a skill set that not many players in the world have got.

“Stuart can 100% still be one of the men that can spark Scotland’s attack. I haven’t seen many people that are explosive or as quick as him from full-back.

“He is a dynamic runner and has a huge boot on him, but because of his skill and ability I think he gets marked pretty heavily and feels like he has got to be the one to do stuff and lead the team.

“So, if the other guys in the Scotland squad can really get around these two and support them to play their natural games, then I think there is plenty to come from them next year.

“The team didn’t go to the World Cup to not get out of the pool, they are a better team than they showed and I know the guys will be hurting.

“Head coach Gregor Townsend is a clever man and he has a good head on his shoulders, I know he has plans to improve the team going forward and I have every faith in him to do that.

“I think they will get stronger from here.It is all about consistency for them. They know they have a game that can hurt the big teams, but it is about putting that together on regular basis.”

“Seeing the guys again was amazing”

Metcalfe, who now works in the fire service, was speaking during a whistle stop tour to Scotland with his family from Hamilton in New Zealand where they reside.

He was over to meet up with old team mates and coaches from the Scottish squad that won the Five Nations 20 year ago in 1999.

In that tournament, first up Scotland defeated Wales 33-20 and then they just lost out to England 24-21 at Twickenham.

A 30-13 home win over Ireland was next before a memorable final weekend of the showpiece event with the Scots in Paris.

Metcalfe, who first arrived in Scotland when he joined Glasgow Hawks in 1997, recounts: “Playing in France was always a joy, whether at international or club level, because the crowd there are so passionate. As with any team who heads to the Stade de France, we knew that if we could get off to a good start and quieten the supporters then that would give us half a chance.

“However, I think it is fair to say none of us thought we would score five tries in the first half! Everything we seemed to do came off.

Thanks to @MrAndrewCotter @JillADouglas for being in charge of today’s reunion for the 1999 @Scotlandteam. Great to catch up with good friends and also raise money for Tom Smith and @MNDoddie5 https://t.co/xgajLvPjTt

“When we got into the changing rooms at half-time we were all a bit stunned, but we knew we had to see it through and to come away with a 36-22 win in Paris is up there with my career highlights.

“Of course the icing on the cake came the following day when Wales beat England at Wembley meaning we had won the Five Nations. I was actually in Andy Reed’s [a Scotland replacement that weekend] house near the airport watching that because I was due to fly back to New Zealand to get married. It really was a few weeks I’ll never forget!”

And after meeting up with a large majority of the squad who won that trophy at an Edinburgh restaurant last week Metcalfe added: “Seeing the guys again was amazing, it brought back so many memories.

“I hadn’t seen some of them for quite a while and it was just brilliant to reminisce, find out what direction everyone’s lives have gone in and, of course, talk about the good old days.

“I think by the end of the meal most of the tries that we had all scored during our careers were from 80 metres out when we had beaten seven or eight defenders to get to the line!

“Seriously though it was a really great day and the camaraderie and team spirit just came flooding back.”

“The rugby family are all behind them”

The gathering was tinged with sadness given the plight of two of the pack members from 1999.

Second-row Doddie Weir, 49, has been battling with Motor Neuron Disease since 2017 and loosehead prop Tom Smith, 48, recently revealed he has been diagnosed with stage four colorectal cancer.

“Doddie made it along which was amazing, it was so good to see the big man who was laughing and joking, but Tom is in France and couldn’t make it,” Metcalfe said.

“When I heard the news about Doddie in 2017 I was shocked and saddened and the same when I heard about Tom recently. When you have been so close to people and won a trophy together you hurt when they hurt and we all just want to give them our best wishes and any help we can.

“The rugby family are all behind them and you could not meet two nicer guys, very different characters, but both with hearts of gold and bloody good rugby players.”

To find out more about the charities set-up by Glenn Metcalfe’s 1999 team mates visit myname5doddie.co.uk and tomsmithrugby.co.uk