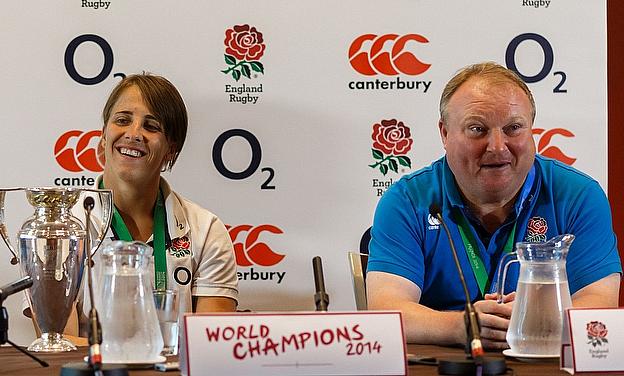 England's triumph at the Women's Rugby World Cup can prove the catalyst for a move into professionalism, according to head coach Gary Street.

Street quit his job as a quantity surveyor seven years ago to kick-start his coaching career, and on Sunday led England's women to a 21-9 victory over Canada in the World Cup final in Paris.

England's head coach admitted the majority of his senior squad will drop back to Earth - and work - with a bump this week.

The victorious England squad returned to London on Monday, with Street admitting some of his players would be back at work on Tuesday.

"At the moment everyone's going back to work this week," said Street, admitting he remains hopeful of a first-ever move into professionalism.

"I know some people have got work in the morning, so they are going to get their car keys now and drive straight home.

"We're hoping something's going to happen in the near future and it's moving towards that.

"It's something we aspire to, but this week brings a bit of normality.

"This changed the sport immeasurably I think, and since the last World Cup, there's a lot more support for programmes internationally.

"The support we've had from the RFU has been absolutely staggering, and from Sport England, so that team behind the team has been huge and to have a bigger programme has meant we can do more work with the players.

"And just the level of competition has been fantastic.

"This was definitely a tipping-point for women's rugby.

"The audiences in France, sold-out stadiums with two million people watching, it just shows there's a market when the product is as good as that."

England's women's cricket team have recently taken the leap into professionalism, and the rugby team's first World Cup victory since 1994 has started a groundswell of support for a similar move.

England captain and Sunderland schoolteacher Katy McLean said the time has come for the women's game to move into the professional ranks.

"I should have been in a meeting at ten o'clock today - but things come up don't they?" she said.

"Ideally we want that opportunity to be professional athletes, and hopefully something like this, winning the World Cup, on this stage and in this manner, gives us the opportunity to do that."

Street admitted Sunday's victory at Stade Jean Bouin helped exorcise some demons for those players who were casualties of England's three final defeats.

"It was a really special moment that crossed a 20-journey of women's rugby.

"To be able to share it with some of the people who hadn't quite made it was special, and we finished the job for them as well.

"I think that's the balance we all need to get right, between Sevens and the full format.

"Sevens in the Olympics is fantastic, that's a huge thing and that will grow the game.

"But there's still nothing like an 80-minute Test match, the ups and downs of what that is, that different spectacle of that gladiator sport.

"I think there's room for both, but what we need to do is ensure that women's rugby continues to grow."