WRWC 2014: England's win over Ireland sees them into the Final Against Canada 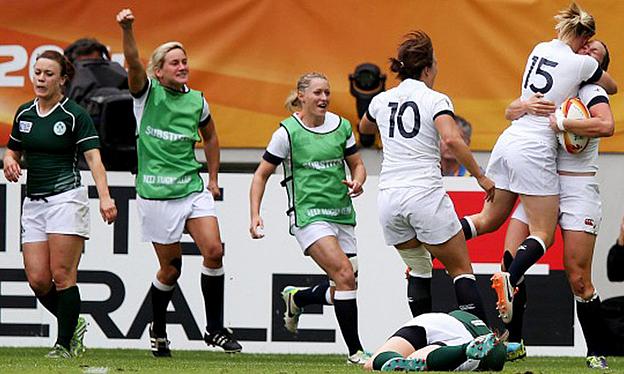 England rejoice in their victory over Ireland
©PA

Scarratt Under no Illusion of Ireland Threat
Women's Rugby World Cup 2014 - Into The Final Week
WRWC 2014: England and Ireland through to the Semis
WRWC 2014: The Round 2 Matches

England will play Canada in the final of the women's World Cup on Sunday.

Gary Street's side booked their place in a fourth consecutive final after a commanding 40-7 victory over Ireland in Wednesday's semi-finals, which saw England run in five tries.

Then Canada edged an 18-16 victory over hosts France, setting up a rerun of last weekend's pool match - which ended in a 13-13 draw.

England scored five tries at the Stade Jean Bouin in Paris to swamp an Irish team side whose semi-final appearance had been underpinned by a stunning pool-stage victory over competition heavyweights New Zealand.

Ireland took the lead through an early try from wing Alison Miller that full-back Niamh Briggs converted - but England established a firm grip on proceedings by scoring 18 points in 13 first-half minutes.

Scarratt completed her penalty hat-trick shortly after the restart, and Ireland could find no way back as England marched on in pursuit of World Cup glory following three runners-up finishes between 2002 and 2010.

England head coach Gary Street said: "Both Canada and France are world class sides - but to be honest I didn't mind who we played in the final.

"Now it is all about concentrating on ourselves and getting us ready for the biggest game of our lives on Sunday.

"The good thing is that we have put on a really good performance today and that is going to stand us in good stead for Sunday. And we are looking forward to having another go at Canada.

"Last weekend we underperformed against them, so this is our opportunity to put that right."